The Road to Indie 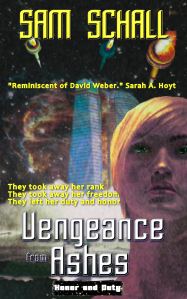 It would be so easy to do anther post about Hugos this morning. In fact, I considered it, especially after seeing how one of the editors posted a diatribe of sorts on the Tor site. However, since I know Kate is fisking the situation Thursday and because Dave did such a great job looking at what’s happening yesterday — and the fact I have a feeling we’re going to be hearing a lot more until the Awards are announced, I’ll leave off on it for now. Instead, I think I’ll discuss my foray into self-publishing and the reasons behind it.

Let me start by saying that I am still firmly behind Naked Reader Press, both as an employer and as my publisher. I thought long and hard about taking Vengeance from Ashes indie. But I’m a firm believer in the adage of not putting all your eggs in a basket and, since VfA is not related to anything I already had with NRP, I figured this was the book to strike out on my own with. That doesn’t mean NRP won’t get more of my books because it will. It just means this particular series will be under my own imprint, so to speak.

So, the process. Oh the process. Even though I can do the process of publishing an e-book in my sleep, it is very different when suddenly you’re doing it for yourself. Suddenly things I was used to just emailing to another member of NRP had to be figured out or farmed out to someone else. Then I had to decide the best way to get the novel out to the widest market. Despite doing this for years, I found myself fumbling some as I looked at new aggregators and tried to figure out if I wanted to go that route or upload directly to the different stores, etc.

But before I did that, I had to think about the novel itself. I knew I needed to build at least a little interest in it before it came out. So, as I finished the first draft, I began posting snippets of it on my blog. The response was positive and enough to convince me — with a few kicks and shoves from Sarah and the others — to keep at it. Then the unthinkable happened. I realized that there were a couple of major plot flaws with the book. So, I went back, did some major rewrites and prayed I was doing the right thing. I waffled and whimpered and whined and Sarah did some more kicking and shoving. She reminded me that I’ve gotten comfortable writing the urban fantasy and paranormal books. But science fiction was different, especially since it is my first love when it comes to reading.

I listened — she was making sense, even if I didn’t want to admit it — and finished the novel. I let it sit for a bit and then did my first round of edits. That’s when I realized I needed someone who could check the book for consistency and proof it for me. Hmmmm. Oh, and I needed a cover. Hmmmmmmmm. So, I thought and talked and everything got done. With a few hiccups along the way. There are always hiccups, whether you realize it at first or not. The edits turned up a couple of minor plot points that needed to be tied up. So, back to the keyboard I went. Yep, that helped. The story was stronger. The cover was done and I heaved a sigh of relief. Everything was ready to start the publishing process.

Or so I thought.

The Amazon account was set up. No problem there. Amazon has a very simple interface for setting up your KDP account. Quick, easy and no sweat. Whew. On to B&N and the rest. No real problem, although the banking confirmation on a couple of them seemed to take longer than necessary. But soon, the accounts were set up and I was ready to move on to the next stage.

Except there was a problem. Or at least there was something I had to ask myself — because Sarah asked me. Damn her 😉 — I use a pen name (Ellie Ferguson) for the paranormals and my own name for the urban fantasies. If I published Vengeance from Ashes under either of those names, would my readers buy it expecting shifters and/or romance? So, after some back and forth, a new pen name was born. Ashes would come out under the name Sam Schall. The name has family ties and has the added benefit of seeming to be male for those who still think women can’t write sf. But, as I pointed out to someone, it is also a name that can be seen as the shortening of Samantha. So, the reader can decide for themselves if the author is male or female. The only problem is that I hadn’t told folks ahead of time that the book would come out under a pen name — head meet desk. Desk, sorry for the dent, but this is my head.

Now, finally, I was ready to convert the manuscript for uploading to the different sales sites. I followed my usual process and took the DOC file and converted it to ePUB and then fro ePUB to MOBI. The MOBI file was uploaded to Amazon without any problem and all I had to do was wait as it went through the review process. So, on to B&N where everything came to a screeching stop. I uploaded the ePUB file and checked the converted file. WTF?!? There were formatting errors all over the place. Okay, maybe I mucked something up. Tried another ePUB file. More formatting errors, but not the same ones. Huh? Fine. I uploaded the DOC file. OMG, now the entire book was italicized. I started banging my head against the desk again.

Grumbling and grousing, I decided that I’d use an aggregator. That meant I had to look at Smashwords or one of its competitors. Since I hate Smashwords with a passion because of the meatgrinder and the lag in payments, I started looking around. After spending more time that I wanted to on the problem, I settled on Draft2Digtial. I liked several things I read about them. First, there was no arcane formatting required like there is with Smashwords. So I didn’t have to go back and make a different DOC file to get rid of section headings, replacing them with bookmarks. Nor did I have to add any odd legal language and disclaimers like Smashwords requires. Then there is the monthly payout and a much quicker post time to B&N, Kobo and — hopefully — iTunes.

So far, I’ve been very happy with the experience with D2D. It’s been extremely easy to use. I can see daily sales and updating the files is simple — or it was once I figured out where the “edit” button was on the page.

Which brings up the two problems I had after Ashes went live. The first happened when Sarah pointed out that I’d accidentally uploaded an earlier version of the cover. Okay, no biggie. I went through and uploaded a new cover image on each of the three sites — Amazon, Smashwords (for their site sales only, not as an aggregator) and D2D. I edited the book file to include the new image and uploaded those files as well. No harm, no foul. Then I sat back and waited, sure that was the last of the problems.

Nope. I’d jinxed myself. It turns out that I’d managed to mangle the names of two characters and it had been missed through all the edits and review process. Yes, the dent in my desk is now the size of a small crater. But, after my head quit hurting and my eyes could focus again, I went back to the manuscript, made the corrections and uploaded the new copies. And I thanked the kind reader who’d pointed out the problem to me instead of posting a scathing review.

Now, like so many other authors, indie and others, I’m watching my sales figures. And trying to figure out how to get the word about the book out to a wider audience. And hiding under the kitchen sink. And, well, being a writer with all the fears and neuroses that attach to it.

So, I guess what I need to do now is give you the links to the book and ask you to spread the word — and ask the if you’ve already read it, you leave a review on Amazon or wherever you purchased it.

Tags: Amazon, Barnes & Noble, Draft2Digital, indie publishing, iTunes, Kobo, Sam Schall, Smashwords, Vengeance from Ashes
From: Uncategorized
← As you sow, so you shall reap
When The Fire Dies →
22 Comments