Cedar Sanderson was born an Air Force brat in Nebraska and spent her childhood en route to new duty stations. Her formative years after her father left the Air Force were spent being home-schooled on the Alaskan frontier. She removed to the “more urban” climes of New Hampshire at the beginning of high school. She has had the usual eclectic range of jobs for Fantasy/ SF authors, ranging from Comedy Magician to Apprentice Shepherdess. She counts the latter as more useful in controlling her four children and First Reader. Her fascination with science dates to her early childhood spent with her grandmother on the Oregon coast studying the flora and fauna and learning to prepare a meal from what she could glean from a tidal pool. This lead to a lifelong interest in science, cooking, and wild edibles. At present she is attending college in Ohio pursuing a dual STEM major in forensic science and microbiology this time around. Her first two times in college were for theology and liberal arts. She is maintaining an average of nearly 20 credit hours while running a household, an entertainment business, and writing multiple novels on the side. This has the result of leaving those watching her indefatigable efforts panting in exhaustion.

Dorothy Grant is the marketer for Peter Grant’s books, as well as a few other authors. She applies an eye for cover design, a love of data, and an endless curiosity about what makes humans tick to matching awesome books with their perfect audience. In her spare time, she flies a pre-WWII airplane she rebuilt, shoots guns much newer than that, and tries to coax her husband into spelunking. She also writes tactically correct scifi set in colony worlds. 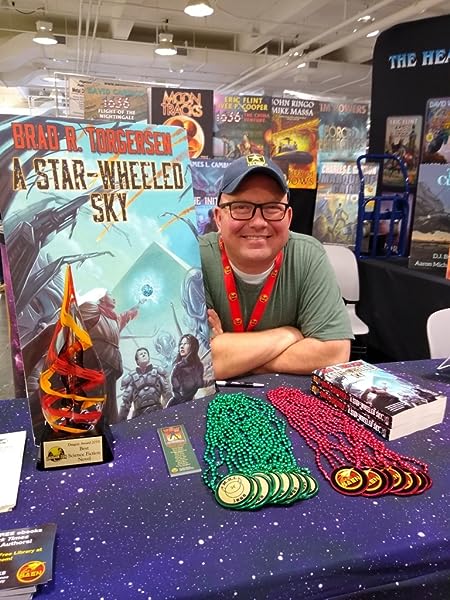 Brad R. Torgersen is a multi-award-winning science fiction and fantasy writer whose book A Star-Wheeled Sky won the 2019 Dragon Award for Best Science Fiction Novel at the 33rd annual DragonCon fan convention in Atlanta, GA. A prolific short fiction author, Torgersen has published stories in numerous anthologies and magazines, to include several Best Of Year editions. Brad is named in Analog magazine’s who’s who of top Analog authors, alongside venerable writers like Larry Niven, Lois McMaster Bujold, Orson Scott Card, and Robert A. Heinlein. Married for almost 30 years, Brad is also a United States Army Reserve Chief Warrant Officer — with multiple deployments to his credit — and currently lives with his wife and daughter in the Mountain West.

Karen Myers is a fantasy and science fiction author, best known for her heroic fantasy novels.

After a degree in Comparative Mythology from Yale University and a career as an industry pioneer building software companies, she has devoted herself to writing speculative fiction. Her stories feature heroes in real and imagined worlds filled with magic, space travel, and adventure.

When she’s not writing, she enjoys hunting, fishing, photography, and playing her fiddle.

Karen lives with her husband, dogs, and cats in an old log cabin in the mountains of central Pennsylvania, surrounded by wildlife. Bears, coyotes, deer, and possums visit often, and when she fiddles on her porch, the wild turkeys talk back.

Alma T. C. Boykin was born in the Midwest, moved to the Great Plains, and after a brief period living in places where trees almost outnumber people, returned to the plains. She escaped college with a BA, worked for a living, then returned for an advanced degree some years later. When not writing or rotating the cat, she teaches and does a few other odds and ends. Hobbies include cooking, reading, hiking, geology, astronomy, and music.