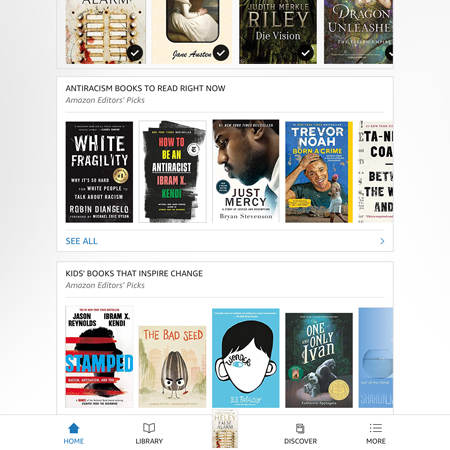 A lot of writers have expressed concern about Amazon’s effective monopoly, and I’ve been trying not to think about it, because I use Amazon so much and it would be extremely uncomfortable to walk away from it. Not only is it the platform for my indie books; I’ve been using KU as a source of quick light reading now that it’s physically difficult for me to walk up and down library stacks carrying a load of books; similar limitations have caused me to turn more and more to Amazon for everyday shopping. So… I’ve been coasting along, hoping that I could stay under their radar, trying to ignore the increase in obnoxious virtue-signalling.

I’m not sure I can do that any more. Since, oh, about the third day of the George Floyd riots, every time I open the Kindle app on my iPad, I get a row of “anti-racist” books shoved into my face.

I’ve never objected to Amazon’s attempt to figure out what I might like to read based on what I’ve bought recently, except to wish they were a little better at it. Our interests seemed aligned. I want more books to read; they want to sell me more books. If only they could figure out that an addiction to Lois McMaster Bujold’s Vorkosigan series doesn’t translate to, “I want any old military SF.” Sigh. Oh well…

But this display, which I did not ask for and certainly do not welcome, is hardly a good-faith attempt to show me books I might be interested in. Dear Amazon, I am not going to buy Ta-Nehisi Coates’ lousy book. I would not read it even if it were free. I would not read it even if you automatically loaded it into my library, and Dear God, can something like that be far away? Stop pushing these books at me. The display doesn’t make me think, “Oh, how virtuous and public-minded this vendor is.” Rather the reverse.

Maybe it’s time to cut the cord. There are other sources for books. There are other online shopping options. There are even other places to publish ebooks… but I don’t know that I have the energy to go after the few alternate platforms that I know of. Maybe it’s a message from Life that it’s time to quit writing; maybe I will just forget about shepherding the sequel to Salt Magic through the Amazon publication process. Or maybe that’s just depression and fatigue talking. I don’t know.

Obviously Amazon isn’t going to even notice my departure… if I depart, which I haven’t quite made up my mind to do yet. But they’ve succeeded in making me feel a little bit dirty every time I open the Kindle app. And I suspect that this is just the beginning. I’m such an obscure writer that they may never get around to censoring my books for political incorrectness… but how long until they have “correctness” apparatchiks scanning and canceling, say, Larry Correia’s books? Where do we draw the line? And is there any, any way to draw it that will get Leviathan’s attention?