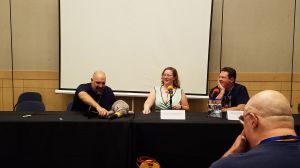 So I was on three panels at LibertyCon… Wait, you’re saying, you did your AAR yesterday? Yes, I did. But the beauty of having two posts to do this in is that I can now talk about the nitty-gritty of writerly stuff that wasn’t the overall con. This is more about interactions with fellow panelist – ie writing professionals – and the audience, who are rarely if ever ‘simple readers.’ For one thing, the audience at a lit con (which LibertyCon is) is already self-selected to be interested in reading, and also in the process behind what they are reading, since they attended one of the most author-heavy events in fandom. So. Three panels, plus a bonus panel I literally was dragged onto.

The first of my panels was “What’s new in Fantasy YA?” which I will admit, I was hesitant about being on. Yes, I wrote some YA a few years back. It’s been a while. And yes, I was a children’s librarian, and I have teens, and I do read for a specialized blog… ok, this wasn’t a bad panel for me to be on. The other panelists were Nan Monroe, Taylor Hoch, Lydia Sherrer, Dave D.J. Butler, and myself. It was an interesting conversation. There were at least three librarians in the audience jotting down titles that we tossed out (or were contributed by the audience). Taylor had prepared a list of books she was recommending, and would read from that at times to give out a blurb. The rest of us were a bit more organic in our suggestions, either things we’ve read recently, or in my case, the books I’ve been seeing recommended when I curate lists of books from crowd-sourcing. As I explained, I do still have the heart of a librarian… But the meat of the panel came when we veered away from discussing specific titles, into talking trends in YA fantasy. one panelist from her end of the table was talking about being happy to see second-world stories, which confused me for a minute until I realized she meant ‘other than first-world’ fantasy. I was a bit startled to hear this term, as I’d been told it was derogatory… Yes, it’s nice to see some of the more obscure fantasy tales brought to light and re-imagined, but I’m not sure I’d term them second best. I’m also not sure I’d want to be pushing all the ‘diversity’ books as another panelist was, seemingly based on their checkboxes rather than writing quality. There is, as always in the post-modern era, a paucity of books for boys. Dave, who publishes as DJ Butler, has a series about Clockwork Charlie that is suited for ages 8-12, but above that? It gets very difficult. And part of that, we think, is that YA fiction sells as much to adult women if not more than it does to teens – look at Twilight and the plethora of books that followed in it’s footsteps. Filtering out the books meant for adults becomes more difficult at this transition age. As we broke it to someone in the audience that no, YA does NOT mean no sex or violence, I was thinking of the conversations we’ve had here about the genre and age group.

My second panel was All the Shades of Noir, where I was seated between Larry Correia and Edward McKeown. Way to give a girl serious performance anxiety! Also not-on-the-panel but should have been was David Weber in the front row, and Kacey Ezell assisting with microphone. The reason I say should have been is that David spent a lot of time with the mike, talking to us up at the table, and Kacey has just written a femme fatale tale Larry was talking up… but I digress. We started out talking about our noir fiction, and why we chose to write it, along with some of the influences that got us in the mood to write noir. But the bulk of the panel was talking about what noir is, and isn’t, and how almost any genre can be noir. Shades of noir, like night falling over a story. Hard-boiled, which is often intermingled with noir, isn’t noir itself. One of the driving characteristics of noir is that the hero be bloody, bent, perhaps even broken. But it’s him between good and evil, and he’ll go down with his guns blazing, to paraphrase from a Raymond Chandler quote that Larry read (and used as a chapter header in Warbound). It was delightful to discover that my strong feelings on portraying human resilience resonate very strongly with how David Weber feels on the same topic.

Finally I was on the panel inspired by the blog I’m one of the writers for, Fantastic Schools and How to Find Them. L Jagi Lamplighter and I, two of the three writers (would have been lovely to have had Chris Nuttall there in person!), plus David Burkhead, Lydia Sherrer, and John Wright (who chose to stay in the audience) made up this panel. It was a fun conversation about the books we’ve written – although David was rather befuddled about why he was on the panel at first. After some discussion of the latest book he’d written, Alchemy of Secrets, we decided that a book about an unnatural alchemist going to highschool over and over definitely qualified for the panel. Because the blog itself was put together with a diverse background: Jagi is a product of ‘regular’ American education, Chris Nuttall came out of British boarding schools, and I was homeschooled. So the panel drifted from books, to educational methods, and a conversation about what’s wrong with schools and can we fix them through modeling better options in our fiction? Perhaps not, but we can give our young readers a glimpse of other options they might be able to pursue to deepen their own learning outside the traditional model.

And the half a panel? Well, I made sure I got to the Indie Publishing – Latest Trends in Self-Publishing and the State of the Market panel, which was supposed to be Dorothy and Peter Grant, LawDog, JL Curtis… and they had already pulled John van Stry up to the table. I was sitting in the front row, and when cover design versus art came up I raised my hand… and next thing I knew LawDog, all six-foot something of him, was taking my hand and pulling me gently but inexorably up to sit with them and push a microphone in my hand. So yes, a half a panel with some great minds, and me doing a little blather about covers and marketing from time to time. But that’s a different post. Or a whole bunch of them.

Whew! I’m tired just writing all this up, imagine three days of this! Your brain gets full. I highly recommend a notebook and don’t forget a pen! 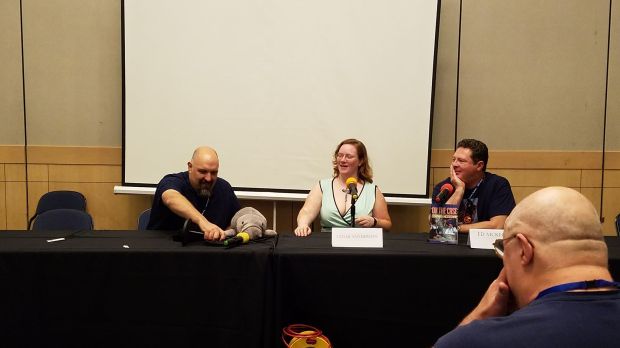