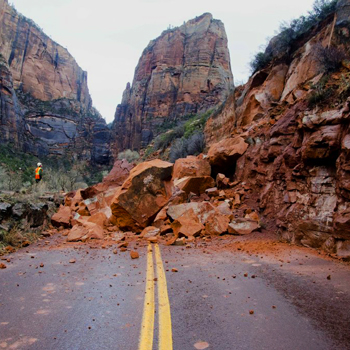 One of the minor pleasures of writing is setting up your major characters to have not just rocks thrown at them, but a major rock slide. Metaphorically speaking.

And for maximum impact, you want the reader to say not “Where the hell did those rocks come from?” but, “Oh, of course that was going to happen, I should have seen it coming.”

For that, you need to keep the reader aware of these stresses and hot buttons that make your characters particularly likely to walk under that cliff, and the clues that tell them the cliff is dangerously unstable. It’s the difference between having your character knocked out by a random rock slide, and having him knocked out by a rock slide in a place clearly labeled Fallen Rock Zone. After he’s made his speech about how modern civil engineers never, ever make a road cut that leaves unstable masses above the road.

At the start of Opening in the Air, I knew that campus assaults on freedom of speech would be a major theme, and that the ending would force my characters to deal with the disastrous consequences of their efforts to protect that freedom. But that wasn’t the only thing going on in the book; while my characters dealt with flying, fire, grackles and student mobs, they also had to live their lives, grow, change, all that good stuff.

So, drawing on hot buttons already set up or at least hinted at in the previous book, I planned a major explosion between my two primary characters as part of the finale of Opening in the Air.

Huh? They were getting along like a house afire at the end of Pocketful of Stars.

Yes, but… there were already elements in both characters that should lead to major problems, and Opening gave me plenty of chances to highlight those little stresses just below the surface that they both kept brushing over.

Before the action of Pocketful, one of them got dumped in a painful, unexpected, public way at the same time that academic failures were making her doubt her worth as a human being. The experience seemed to her to validate her family’s constant criticism. She’s tentative, to say the least, about a new relationship, and tries not to count too much on its lasting because she doesn’t feel like someone who really deserves to be loved. None of this is a major plot issue – this is a paranormal thriller, not a romance – but it’s a part of the character that I needed to bring out. She only hinted at this backstory in Pocketful, so in Opening I fill in a few details.

The other character is slightly paranoid, which is considered a plus in his line of work but is not so good for healthy relationships. He visibly struggles with the fact that his partner’s best friend is someone of the opposite sex, no matter how often she insists that the relationship is purely platonic. Easy enough to accentuate his stress with ambiguous scenes.

He also has a chip on his shoulder about being patronized by the super-smart people he has to work with now; something that showed briefly in Pocketful, where he asks her if she’s just too much of an intellectual snob to hang out with somebody who “got a lousy criminal justice degree from a lousy state college.” She’s one of those super-smart people, and the best friend he feels jealous of is another. Intellectual snobbery in various directions turned into a recurring theme in this book, and just to make it worse, just before the explosion his girlfriend and that best friend share a mathematical joke that he can’t quite follow.

Near the end, all these personal issues come together into one scene that triggers all his jealousy and all her insecurity — and, of course, that scene can’t just happen; it has to be a natural consequence of the main story and further the resolution of that story. (Wipes brow.)

I hope that by this point, their fight will be credible to the reader and will not seem like “author jerking the characters around for an invented crisis.” I particularly hope that readers will understand why Thalia is devastated by this fight and how it brings up old wounds she’s never really dealt with.

Did it work? Who knows? All I can do is wait for reviews… and stay focused on the next book. Because this one, for good or ill, is out in the world to make its own way now.