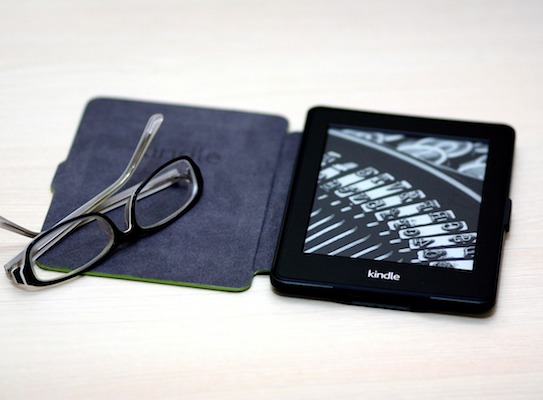 (This is a guest post by author Nitay Arbel)

One of the nicer features of reading an ebook on a Kindle (or in the Kindle app on a smartphone or tablet) is that you can press and hold on a word  and see its definition, or on a place name and see a brief description. Many of the more recent books go one step further, and add “X-ray” content: one can click on a character name, say, and get a brief description of the character. 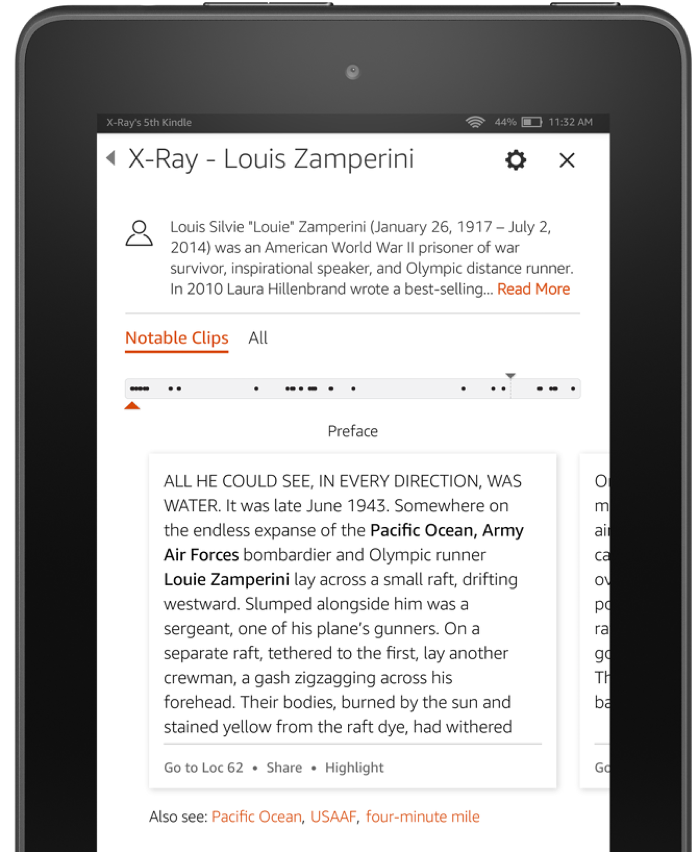 This can be very useful to keep track of a complex plot with many characters in a novel, or of all the dramatis personae in a history book, or a biography.  (X-ray also offers a kind-of concordance feature: you can see at a glance where else this character is discussed, and jump there right away. This latter feature is invaluable in nonfiction books, but probably of more limited use in fiction.)

I found myself wondering how one could add X-ray content to one’s own indie Kindle books. To my surprise, that turns out to be surprisingly easy.

Log into your KDP account, go to your books, and click the button on the far right of the book you want to add X-ray to.

If you’ve already added some X-ray info, the item will say “Launch X-ray” as in the screenshot below. If there still isn’t any, the item will give you the option to create X-ray instead.

If you choose to create, the book goes through an indexing process. I assume some level of natural language processing AI is involved: the initial indexing process does a good, but not perfect, job of finding characters with different name variations. For instance, in the case of my novel, it seemed to realize Amy, Amy Ziegler, and Ms. Ziegler were one and the same character and linked all instances thereof to the same X-ray entry, but it did not do so for “Amy Keenan” (her eventual married name). That said, this may be a feature rather than a bug in some cases.

And of course one cannot expect the impossible. For instance, the AI couldn’t figure out that sometimes, I was referring to the progressive rock band Yes rather than to the English affirmative “yes” 🙂

For many of the place names and terms of art, I discovered that X-ray entries had been created, but instead of being blank, they defaulted to Wikipedia pages in English. This process, too, is not error-proof but more intelligent than one might expect: for instance, the software correctly took ‘absolute pitch’ and ‘perfect pitch’ to be synonyms and linked them both to the same WP page. But it cannot reasonably be expected to figure out that ‘the City’ refers to the ‘City of London’ (i.e., the Wall Street of England). I also found that ‘Wagner’ was not automatically matched to the composer Richard Wagner, as there are plenty of other people with that last name (the German equivalent of Carter or Wagoner).

You have two basic options for an X-ray entry: Wikipedia or “Create Custom”. The latter is the default for character names (unless they were matched, correctly or in error, to historical personalities or present-day public figures).

The “create custom” has two fields. One is the description that comes up when a reader clicks on a word or name in the book (e.g. “Forensic dentist at the Mays County CSI”; the second is meant for author notes such as “I learned about forensic dentistry from the author Faye Kellerman”. These will show up as secondary information.

An entry can have the following statuses

It took me a moment to figure out I was supposed to toggle the “Item reviewed” switch at the bottom of the entry to confirm an item. However, to quickly locate all items with a given status, you can use the “Sort and Filter” popup menu on the top left. 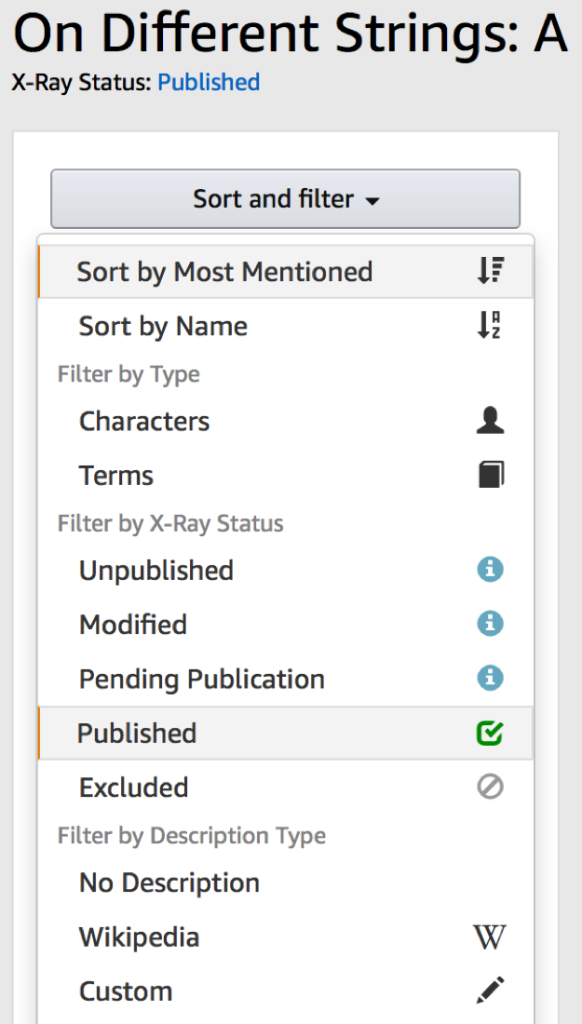 As I already mentioned, whatever the initial indexing involves does a pretty good job detecting character name variations. But what if by accident a character still gets split in two?

I found the remedy in the FAQ. Basically, you first search the “master” character that you already created a bio for on the left, and you will see something like this

(Note the radio button that allow you to select which name will show up as the display name in the X-ray popups. Note also that the numbers under ‘occurrences’ are clickable, so that you can see those instances of the name in context if you have trouble remembering a minor character, or suspect two characters have been mistakenly conflated.) Under “Add alternate spelling or usage” you can search for another character, and thus “merge” it with this one. If you already have a character description attached to that, you will get a warning.

You can also create a term that does not occur in the book, just to act as a display name.

If you find that a name has been mistakenly associated with this character, you can hit the “Remove” button to ‘detach’ it into its own entity. You can then attach it to another character if need be.

There is also an option to “Add a new item”. For instance, in this ebook, I had to create a new entry for “Genesis” to refer to the band, rather than to the noun. If there is one feature I would add to the software, it would be the ability to recognize capitalized words and phrases as proper names rather than nouns. In this case, the indexing process might have pre-filled with the Wikipedia entry for the book of the Bible rather than the band, but that is easily fixed by pressing the button “Choose Wikipedia Article” and either picking the appropriate match to the search string “Genesis” from the menu, or modifying the search and repeating it.

At any rate, the number of matches for a new term will initially read ‘?’ and only be updated at X-ray publication (and the associated indexing).

When you are more or less done, you can hit “Review and Publish”. You will get a screen like this: 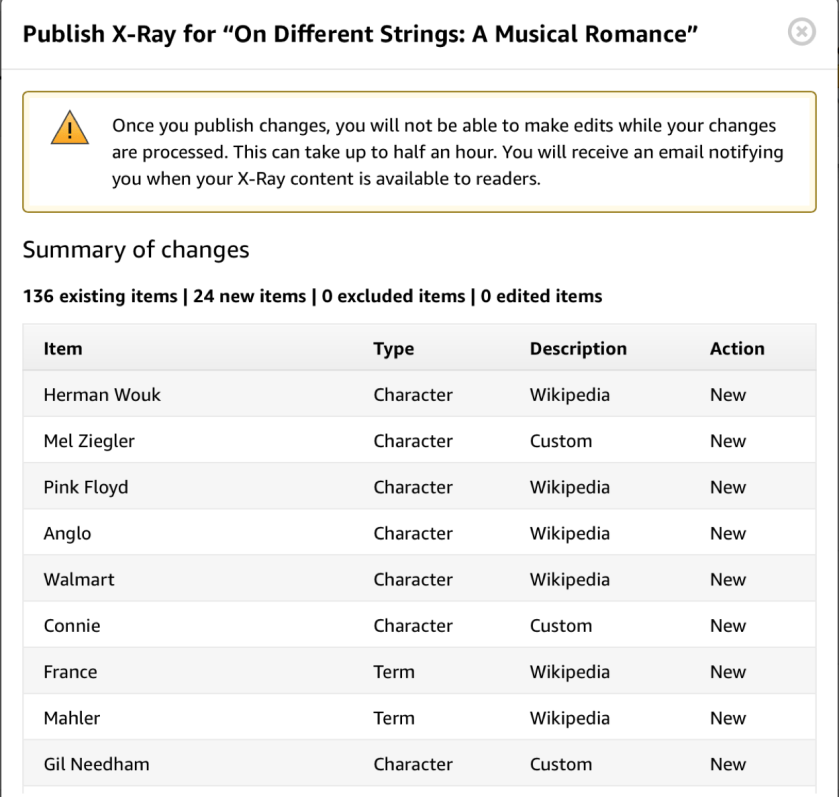 You can then hit “Cancel”, which takes you back to the previous editing screen, or “Publish”. If you do the latter, you get this prompt.

You will get an email when the process is finished. I got mine in less than two minutes.

How does one verify the result? For testing, I used the Kindle app on my iPhone 6s Plus (one of my two default book reading devices, the other being my iPad Pro). Of course, you need to force a refresh of the file: the quick and dirty way I did it was to “Remove From Device” the book (press and hold to see the popup menu with that option), then go to the “ALL” rather than “DOWNLOADED” tab, and re-download the book. In my case, it always showed up first in that screen since it was the most recently updated file.

The process can be repeated multiple times. It would have been nice to be able to ‘proof’ or ‘flight-test’ this offline rather than to have to push updates live right away, but this is probably more of an issue for bestselling writers than for amateurs just starting out.

Finally, a word about what to put in there. When it comes to character entries, I would personally stay short and to the point—and not give away ‘spoilers’.For nonfiction works, needless to say, spoilers are normally not a consideration.

Some (especially in epic works) might be inclined to put whole character biographies in there, but keep in mind that screen real estate is limited. If you want to go that route, I would make sure to lead off with a one-line ‘capsule’ that has the essentials and easily shows on screen. (This is also the general style recommendation for Wikipedia entries.)

(Please check out Nitay’s Amazon Author Page for more information about him and his books!)