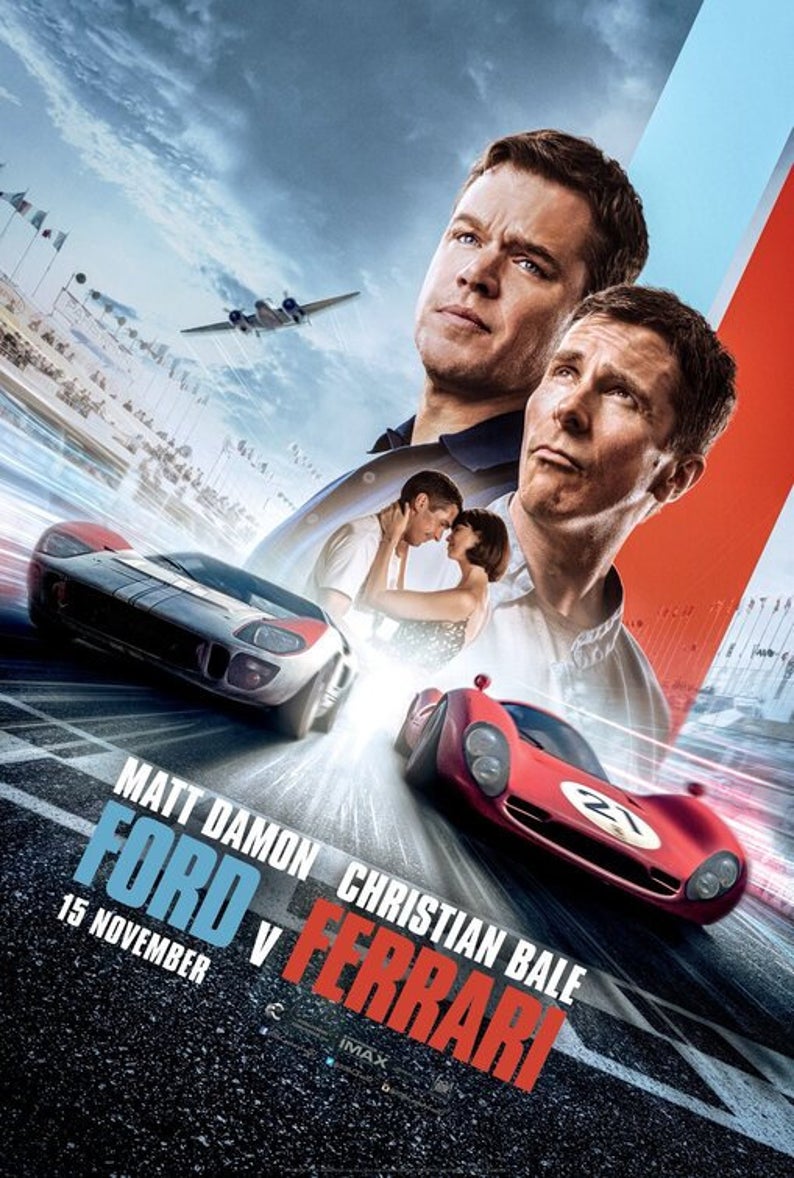 If you haven’t seen Ford vs Ferrari yet, you need to correct yourself. Yes, it’s a car movie. No, you don’t need to know a great deal about cars. Hell, go in knowing nothing. Because in the end, this movie isn’t about cars. It’s about men. Being men. Doing manly things. Without being negative! You heard that: Hollywood has delivered a wholesome movie about men! In the prescient words of Tychus Findlay: “Hell, it’s about time!”

I love cars.  I grew up learning all I could about them. My father has been a traffic collision investigator in Los Angeles for almost three decades. Listening to him explain the technical side of car accidents at the family dinner table was a normal part of my childhood. I miss it now that I’m grown and moved out.  A movie about racing cars? Count me in!

When Ken Miles (as portrayed so perfectly by Christian Bale) sits down with his son at an airstrip, it’s not to lecture at the boy. He’s trying to share with his son why he loves racing. What it does for him. Why he climbs behind the wheel even after enduring wrecks and failures. No swearing, no screaming, none of that usual overused, over-dramatized weirdness. Just a father and a son growing together in a poignant moment.  How often do we see that from Hollywood? Men are either chest-thumping gorillas on a steroid bender, or Peter Griffin-level dunces. We have bid the gelding be fruitful indeed.

Miles is balanced by Carroll Shelby (portrayed by Matt Damon), a man who became synonymous with speed, performance and beautiful cars in the last century. The two play against and with each other. They continue to fight and bicker, tension easing at times but never going away until finally they throw down in front of Miles’ house. Certain critics have complained about this scene, calling it “problematic.”

Comments like that make me stop and wonder: People have you read Ken Miles’ biography?  He drove a tank onto Normandy beach during D-Day. Carroll Shelby was a Texas chicken farmer and oil roughneck who became the first American driver to win at Le Mans. The kind of personalities willing to charge Nazis in a tank across Europe, or go head-to-head against the best drivers for 24 hours of flat-out high speed driving are not the kind to sit down over soy lattes and talk about their feelings in between choruses of “Kumbaya.” Know what men like that do?  Punch another man in the face. Insult each other. Beat the hell out of each other. Then we get up, still friends and go back to working together.*

Ford vs Ferrari captures all of this, and tries it’s very best to show how these personalities come into conflict. Jon Bernthal’s performance as Lee Iacocca is spot-on, lending support at every turn. Josh Lucas gives us a Leo Beebe that we can genuinely despise.  He was so convincing that if I hadn’t known better, I would’ve sworn that he, not Enzo Ferrari, was the real villain! I agree with YouTuber “Critical Drinker”, I would have liked to have seen more of what Ferrari was doing at the same time. Even if it adds another 30-45 minutes of run time. Bring me that Director’s Cut, I’ll pay cash on the barrel.

I would also want to see more of the relationship between Miles and his wife.  Her performance was very-well presented, but she didn’t get quite enough backstory for me to appreciate or empathize with her character.  In some ways, she was more of a distraction. Even just 5 more minutes would have been nice for better character development.

A reviewer in the National Post also cited this as a problem, screeching for all to hear that the film “lacked diversity in gender and colors. Too many straight white men.” Please, tell me exactly how many gay black women you’re going to see running a major car company in America, in 1960s, at the height of the Civil Rights Movement? Women en masse entered the workforce 20 years prior during the rapid industrialization and expansion known as World War II. 78 years later, we are only now beginning to see women become executives in the auto industry. What in the world possesses you to think that we should change history to fit your privileged sensibilities?

Thankfully, the director, producers, and writers had more sense than that. The movie delivered is one which focuses on the people who made a Ford championship at the ‘66 Le Mans possible. It did not come easily, it did not come without costs. But it happened.

The racing scenes are tight and well-scripted in a glamorous yet gritty way. We see the strain racing takes on Miles and Shelby alike, how they summon the will to hold on even when it’s all they have left. We see portions of several races, each more exciting than the last, culminating in the ‘66 Le Mans. Everything is laid on the line, nothing held back.

You might’ve already turned to the the history books and read about what happened, you might already know the story. But until you see the #1 car, a Ford GT40 driven by Ken Miles, hurtling down the Mulsanne Straight over 200 miles per hour, it doesn’t come together what you’re witnessing.  Then you see it, and it does.

I found the pacing to be a perfect balance of fast and slow.  Most car movies stay high-octane. They never take their foot off the gas.  Because the pedal is mashed to the floorboard.  This becomes a problem when we the audience need to be able to process what’s happening, breathe, and take it all in.  Ford vs Ferrari has spectacular pacing.  The pedal never releases so much as it gracefully coasts in between jumping the needle up to 7,000 rpm with intense pressure and thrills.  Exactly as it should.

The movie isn’t perfect. Nor should we expect it to be absolutely perfect in every single way. What movies should strive for is to be within what redlegs call “tolerance”- which is to say that the deviations (changes) in the plot from zero are not so extreme that they throw us out of the story, or out of tolerance.

Example: Gun 6 is told to set their quadrant and deflection at 3111 and 400 respectively.  Handwheels are spinning as the gun barrel rotates into position.  Gun Chief sees that the quadrant and deflection is set at 3110.9 and 399.9 respectively. Assuming a variance of +/- .1 mils, he can shoot that mission and be just fine.  Lack of respect for tolerance is a common problem we see especially in cinema.  What studios so often do, even when they have copious amounts of source material to work with, is step outside the tolerances fans have.  Blowing up the Millennium Falcon and killing R2-D2 would be a violation of tolerance. This understanding, more than anything else, distinguishes Ford vs Ferrari from any other movies I might’ve seen that night- the film crew and director stayed within tolerances for their target audience.

Let the naysayers and Trouble-Glasses Brigade say what they wish- story matters more than politics.  Telling an excellent story well, portraying it well, doing more than shaky cam and lens flare and outrageous CGI are all critically important elements to consider.  Diversity of cast does not. I don’t need to see CGI to call a story incredible. I need characters who rise above the squalor to become something more.  I crave a story which tells of the human condition and how men (and women) overcame high odds to attain greatness. Ken Miles was a down on his luck former tanker who became a champion.**

Personally, I don’t expect the Trouble-Glasses Brigade or their sycophants to do more than look down their noses and sneer.  Sneer? Aye, and hate. Because such as Ken Miles or Carroll Shelby, Sally Ride, Grace Hopper, and a wide world of others, have done something which these sneering poseurs have not- they have dared.  They have dared to sail out of sight of land, even when the cost was high. The naysaying critics haven’t. It’s why they critique. It’s all they can do. To them, construction and creation are impossible heights. Better and easier by far to critique, trashing at every turn the work of peers than to even attempt something difficult, where the possibility of failure is so high.

This movie was very well-crafted, and I mean that in every sense of the word.  Men don’t like being disrespected. We’ve got no problem with women being uplifted and praised for genuinely good performance.  But we don’t like when that praise and uplift comes at the expense of men being made into shallow, weak, boring, uninteresting dullards. Ford vs Ferrari did not put down either gender, and was honest in its approach. I can respect that, I can appreciate that.  And I can certainly put my money behind that sort of craftsmanship, in theater and in home entertainment, over any fallacious woke noise polluting the air with its worthless cluttering.

*I call my best friend and hanai big brother Patrick every year on his birthday to remind him he smells bad, his choice of beer sucks, and he’s a fricking midget who ought to try doing thirty-inch steps in combat boots. I am told off by Patrick in similar language.  Anytime we video call each other, even in groups, the use of Hawaiian good luck signs will be profligate. He’s still my very best friend and I thank God he’s a part of my life.

**Miles was ruled to have come in second to Dan Gurney, as Gurney had traveled 50 more feet.  Whatever. We know who came across the line first.