[This is going to be short, as I’m on vacation, escaping the Texas heat]

What do you do when you are avoiding writing by looking at all the horrible half written stories that never got finished . . . And you realize you’ve got your hands on exactly what your series needs.

“Yes!” The Muse clutches it in delight. “It’s perfect! Get writing!”

Small problem. The story starts during the massive FUBAR in book 17 of the series, and you’re supposed to be finishing book 45.

Well, it takes more than that to shut up the Muse. And the story does happen off in a parallel World that doesn’t get much attention. So I just have to plot out a timeline and see when things happen that this poor Character _must_ be aware of. So she can think about them while she gets on with the getting married, having a baby, raising same . . . Okay, I can elide past most of this, right Muse? Since, you know, it’ll only be important to the series about the time the kids go off to college and . . .

Muse! Really! A cross dimensional attack that hasn’t been mentioned in any of the books to date?

Okay, we’ll write it where you think it ought to be, but don’t give me any flack if I completely edit it out of the story, or at a minimum, shift it past the time of book 45, Okay?

Now why, you say, am I even agreeing to write this? 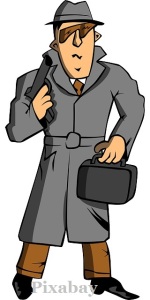 Two of the worlds have nice fictional espionage organizations and Main Characters with huge back stories on both sides. The other one barely gets a mention.

So here’s this story that popped out of nowhere, and suddenly the Earth has actual named agents, and buildings and plans for infiltrating the other two places. So it’s getting written. And then the invasion is getting written out! You hear me, Muse! This is a pain in the keyboard to write and probably boring as all get out in the middle.