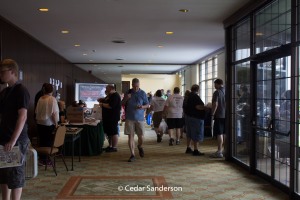 This is a story about the nicest man in all of Fandom.

I first came to LibertyCon because it was a family reunion for family I’d never met before. There were… two, maybe three people at that con I’d met in person, and I’m mildly agoraphobic. At the time, make that more than mild. So meeting new people, while fun, was also terrifying. I don’t recall now who introduced me to Uncle Timmy. I know that several people pointed him out to me, and told me he was the man to talk to if I wanted to become a guest at the con myself. I do vividly recall that he came and sat with me at Opening Ceremonies and talked to me. He pointed out some people, he made bad jokes, and he put me utterly at ease. Every time I came to LibertyCon I could expect to get a hug and a few words from him, usually encouraging as I started to write more books and become more than just a fan.

I never got the time to spend a long conversation with him. Not that we both wouldn’t have enjoyed it, I think. Simply that I wasn’t the only person that wanted to say hi… everyone loves him. He could walk through the halls of the con and never have a silent moment. Over the years I got to understand that he was the heart and soul of LibertyCon. He formed it into the relaxed, easygoing family reunion atmosphere I was so delighted with from my first visit. The saying goes ‘by your fruits you shall know them.’ Uncle Timmy’s lasting legacy was the con, the one that feels like family of the heart.

It wasn’t all peaches and cream. I wept for him when the new school fandom dealt him an underhanded blow by having him uninvited from Archon. He’s a gentleman, and I never saw or heard an unkind word from him about it. Something about that calm friendly demeanor was unbearable to some petty fen, and so they squashed what they could not control. Which is I think exactly what it was. He is very much his own person, with a great mind behind that smile. He’s created something special with LibertyCon and there in the name is the one thing they hate and fear: freedom. Uncle Timmy helped me, unconsciously I am certain, to work toward my freedom from fear and doubts. I expect there are many, many more stories like mine out there.

He is a fine gentleman and a great man. Laughter and ease followed in his wake. I don’t know if he will get to see this, but thank you, sir. God bless and keep you.