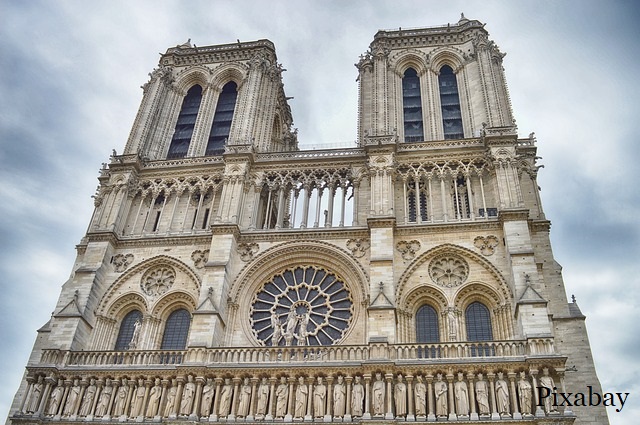 Do you have a moment to talk about our savior?

You do? That’s too bad, because I am absolutely the wrong person to talk about religion. Even in fiction.

Church didn’t happen in my childhood, so it tends to get overlooked in my fiction.

But here it is. An iconic cathedral badly damaged a few days ago. Today is Good Friday. And Passover. Sunday is Easter, Monday is Earth Day, and Wednesday, according to my calendar, is Administrative Professionals Day.

So I’m going to fumble around a bit about religion in completely fictional worlds.

Not the “world” of Earth Day and AP Day, although it might be amusing to create a future world where so many “Participation Trophy” levels of recognition had special days that workers were forced to pick only 120 that they could celebrate every year by taking a day off work.

Instead, let’s talk about how in fiction you can use an existent religion or invent your own, with deities that might be as hands off as they are around here, or they might be a lot more “hands on” type of managers.

Now, in historical fiction, you need to be up on the religion(s) of the area(s) your story takes place, at the time it’s taking place.

And then you can add to it, just a bit. If you wish. And if you’re writing a historical fantasy, you probably will. God can put his thumb on the scale, Prophets and saints and devils can walk the cobblestone streets. Magic, witches and wizards . . . however the writer wishes, but the more realistic the world, the lighter the touch of the divine (and satanic) needs to be.
Religions you didn’t grow up in are going to take a lot of research, a lot of finding people of that religion and asking for a critique.

Which, for me, is pretty much any religion.

The only “real” religion I use extensively is a version of Islam that has been taken over and subverted to the needs of some cross dimensional stranded travelers. I’ve changed their calendar, and about all that remains is Ramadan and the Eid, which is, often as not, referred to as New Year’s Eve. No one’s issued a Fatwah on me yet, probably because my travelers helped the Islamic Union win the war.

Although I did get one book review that raved about my anti-Christian writing. And that was a dozen books before the World with Islamics in it ever appeared.

Did I mention that I tend to overlook religion? I’m also oblivious to errors and slights. Which is why religion is very much background rather than foreground in most of what I write. Well, I’m getting better, more aware, but if I ever publish this old manuscript I hauled out and dusted off, I’ll be right back on some bad lists.

Now flat out science fiction has the ability to create characters who have god-like abilities. Genetic engineering, or cyborg parts, a lens clamped to your wrist by an alien, bitten by a radioactive spider . . .

But generally speaking they only think they’re actual gods if they’re dangerously mentally imbalanced. Or, well, if the writer wants them to believe they are gods. Some people might worship them, but do they believe it themselves? Do they try to live up to the expectations of their worshipers, or does the worship have the power to influence them? Do they embrace the role, or are they horrified, try to deny it and run away?

You can have fun torturing a lot of characters that way.

Is this a bad time to mention that writers are the creator gods of their fictional universes?

The type of book you write, the characters you create, are going to determine whether and how much religion is in your writing. If religion has nothing to do with the story, it’ll be background. If it’s a religious war between true believers of differing beliefs, it’ll be front and center. If any of your characters are deeply religious, it can be useful at some point.

Your Orthodox Jew pushes his beef stroganoff around the plate a bit and goes to bed hungry, not realizing he’s just dodged a poisoning. The Hindu avoids the trap laid by the aliens as he had no interest in killing the cow that was staked out as bait for humans . . .

Are there any human groups who have failed altogether to create an explanation for the world? A tribe with no gods or spirits?

I don’t know what it is about humans, that drives this. Is there something we can’t quite sense? Something that detecting wasn’t an evolutionary advantage, so there was nothing to drive the development of a specialized organ. But perhaps some sense of the divine, the spiritual, wasn’t actually negative, so it never was actively selected against?
Whatever the explanation, we believe, and we build edifices to our god or gods. And we need to remember this, when we build a world.

I suspect this is a weak spot in my writing, both in world building and in characterizations.

So, take a look at my abuse of a religion, and talk about yours. Leave a link, to yours or to a favorite read.