It’s rare that I will re-read a book, or a series. When I find myself re-reading something, it’s usually because I found the universe so thoroughly immersive and enjoyable — the characters, the setting, the plot, everything — I wasn’t content with just one tour. I’ve done this with several of W. Michael Gear’s books. Many of Larry Niven’s too. I’ve done it several times with Ender’s Game and Speaker for the Dead. I’ve re-read the Sten series and A Reckoning For Kings (by Bunch & Cole) so many times, the original paperbacks are literally falling apart at the spine. Ditto for the first two Chronicles of Thomas Covenant, by Stephen R. Donaldson. Each of these works — by different writers with different backgrounds — gave me so much readerly pleasure, I wasn’t satisfied with a single pass. So I’ve gone back for more.

This time? It’s Larry Correia’s Monster Hunter International series. Which I’ve been reading as each new book has come out, but which I find myself re-reading on deployment. From the first book, onward. And which I’ve been enjoy hugely, both as a reader, and also as a writer.

See, being a pro writer has been hard on my recreational reading sensibilities. There is an internal editor at work now — picture him like a grumpy, dyspeptic Lou Grant kind of guy, sitting behind a desk — which attempts to “back-seat drive” my rec reading brain. Very often this derails the process, because I find myself parsing passages and chapters with an eye to “improving” them through the sieve of my own writerly style, wit, timing, taste, etc. Which is a damned silly way to read a book when you’re trying to relax. At which point I yell at Lou Grant, saying, “You’re supposed to be off the clock, you bastard!” Lou usually just flips me the bird, and I have to put the book down, and go do something else.

Larry’s Monster Hunter International books do the magic trick of making Lou Grant bob his head in agreement, saying, “Yeah, yeah, man, this is good shit, yeah,” and I don’t have to work at it — to be entertained. The entertainment comes naturally, and I find myself flipping pages fast and furious. Because Larry is that good of a storyteller. 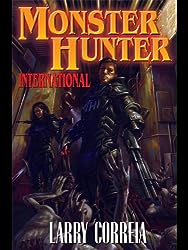 Now, without giving away too much of the plot, I want to focus in on what I consider to be some of the keys to Larry’s rip-roaring success with this series. I will use Monster Hunter International and Monster Hunter Vendetta as my focus, though the fun certainly improves with each expansion of the franchise. But these are the two anchor books I think every inquiring reader needs to digest, so that the successive volumes are properly framed. As with the Sten books, you can drop into the series at any point and expect to have a good time. But it’s still a great idea to start with the beginning in mind. Because MHI is not just a terrific universe peopled with terrific characters bound up in a terrific story, it’s also a textbook on how to enthrall a readership — and keep that readership expanding, as well as coming back for more.

First, MHI is about a secret world. The Harry Potter books are another terrific crowd-pleasing example of this. In both cases, the audience simply has to make one leap of faith: that the modern, ordinary world we inhabit is merely a mask over a deeper, magical, quite more adventurous (as well as dangerous) world, which we can almost glimpse out of the corner of our eyes. But as soon as we look to see, that world is gone. Replaced by the mundane. Still, we deeply wish the secret world could be real. And MHI allows it to be real, on the printed page. The yearning for the secret world is satisfied.

Second, MHI is about a Chosen Hero. Again, Harry Potter does this too. In fact, most of the blockbuster stories which inhabit our popular imagination — from Star Wars to the Marvel Cinematic Universe — focus on people who are extraordinary. Set apart. They might not know it in the beginning. But some kind of looming threat against the good things in the world, will cause or force the Chosen Hero (or heroes, or heroines) to throw off the disguise of the ordinary, and accept his/their mantle(s) as the people who’ve been selected (by the gods, by fate, by the cosmos, by dumb luck) to be the champion(s) of the age. Like the secret world, the Chosen Hero is a concept most people find irresistible. Most of us grow up playing make-believe, in which we manage to be the “special” and courageous folk who make the difference. I don’t think we ever lose this child-like fascination with the idea that there is, lurking within all of us, the power to be The One who rises up to change things for the better. Almost 20 years ago, the original Matrix movie exploited this desire — on the part of the audience — to fantastic and gripping effect. MHI does too.

Third, MHI is about genuinely enjoyable, sympathetic heroes. I can’t stress this one enough, mostly because anti-heroes have somewhat swamped our popular culture of late. Whether it’s Walter White in Breaking Bad — a Shakespearean tragedy which sees an ordinary man do bad things for good reasons, until at last he realizes he likes being bad because it gives him power, until he is consumed — or Tony Soprano from The Sopranos, the anti-hero has become a fixture in the popular storytelling landscape. Now, anti-heroes are remarkable creatures because you can often do more with them than you can with a straight-up hero. The anti-hero gets to play by a different set of rules — and this too appeals to a deep longing each of us has, to shatter convention, and allow our individual wants, desires, lusts, quest for power, etc., to rule the day. But the anti-hero ultimately has to turn to good, otherwise the story is simply a bleak cautionary tale. And while the people of MHI aren’t perfect, they allow us to cleanly root for them. Yes, even agent Franks. A man who is every inch an anti-hero, until you understand him. 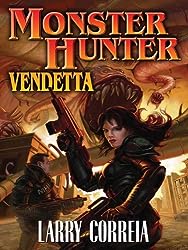 Fourth, MHI employs genuinely delicious villains. You can’t really make your heroes live up to themselves, unless you give them truly substantial villains to battle. The original Star Wars trilogy relied as much on Vader and Palpatine, to tell an epic tale, as it did on Luke, Leia, and Han. So too did the movie Sneakers rely on Cosmo to make its story compelling. In fact, Cosmo is almost the hero of the whole film, except events have steered Cosmo down the path of darkness, whereas Martin Bishop evolved to discover that what he thought he wanted in his youth, wasn’t what the world actually needed. MHI does a lot of this, too. Many of the villains, used to be heroes. But have been turned by circumstances into something else. In the case of the first two MHI villains, we get a front-row seat for much of this. To include the many ways in which the links — villains, to heroes, and back again — prove vital to the telling of the story. The heroes and the villains are bound up in a very personal struggle, that has universal proportion.

Fifth, MHI is a “family” affair. Some of the bad guys are literally related to the good guys. As people, all of us are acquainted with family drama. Sometimes, to a toxic degree. But it’s because we’re so intimately familiar with family drama, that fictional family drama can become almost instantly engaging. Consider the all-time Science Fiction classic, Dune. Family drama all the way. Star Wars? Family drama. Harry Potter and Downton Abbey? Family dramas. Whether those families are direct blood, or are simply the relationships forged between individuals — by trial, familiarity, greed, resentment, jealousy, or true love. The Shackleford clan is a dynasty in MHI‘s mythic alternative world, and the interplay of the family dynamics — some of which is rendered with terrific skill — can almost sell the series on its own. Especially when you factor in the Pitt clan, who have been forced by fate to join in the Shackleford legacy. Again, the links — bad guys, to good guys, and back again — are a big part of what makes the books pop. Without those links, MHI wouldn’t be nearly as page-turning.

Sixth, MHI is literally about killing monsters. Every kid who ever pulled the sheets over her head at night, because she was terrified of the monster under the bed — eyes glowing red, like in The Nightmare Before Christmas — has secretly yearned to strike back at the fear. To not be scared anymore. To face the monster under the bed, and defeat it. That’s a very primal desire which, along with the desire to be unique or special, gives MHI a visceral vicariousness that’s difficult to ignore. Every time Owen or Julie or Milo or one of the other heroes (even Franks!) slugs it out with a vampire, a werewolf, a zombie, or worse, we’re along for the glorious ride. The kind of blood-pumping, masterfully-detailed rhetorical fist-fight that gets your blood pumping. This is the kind of stuff you play-acted as a little kid. Charging into battle with your nightmares, and making them pay for keeping you scared at night when the lights are out.

Seventh, MHI makes you want to be part of the story. So when you leave the book, or close the cover, the action is still happening in your imagination. You want to be a newbie, slogging through training and earning your right to wear a team patch, so that you can go toe-to-toe with the hordes of Hell, right alongside Holly and Earl and all the rest. The Shacklefords — and their company by extension — are also the kind of people you wish you could work with in your real job, too. Loyal. Tough. Dependable. Never willing to let a brother or a sister hang. We want our world to be that way. We want our friends and our family to be that rock-solid. Because too often, when the heat is on, friends and family in the real world let us down. But we know in our hearts that Monster Hunter International, and the men and women who staff it, are true blue. Not perfect. Not immortal. But true blue. Which, if I do say so myself, reflects the core of Larry Correia himself. True blue. Or red, as Larry might prefer (as in red state. *chuckle*.)

So, MHI is a terrific, ongoing story. Yes. But it’s a story that manages to deftly weave seven strong storytelling threads together in such a way that those threads become even more appealing upon second review. Not every book I go back to re-read, gets me even better than the first time through. But MHI is just such a book, and just such a series. I don’t think you could find more enjoyable “homework” if you’re thinking about writing books and stories of your own — at least if your goal is to earn an audience.

If the premise of MHI is, “Kill monsters, get paid,” then the ethic of storytelling is, “Entertain readers, get paid.” Larry’s given us all a stupendously enjoyable blueprint, for that very project — at least where key ingredients are concerned. I’ve been buzzing — in my creative brain, all summer — about how to include some of these ingredients in my own work. I think most of the people reading this piece, could stand to do the same.

And the best part?

Larry’s not done with the series yet! There is more to come!