We’ve had a lot of discussions about when is it plagiarism and when is it grabbing an idea and turning it into something new. Using someone else’s words is plagiarizing. Using someone else’s ideas is just good healthy fun. If you just steal the idea, the premise, it’s not stealing. Use your own words for the whole thing. And definitely change the character and place names and descriptions. FanFic is a whole other can of worms.

I realized that some of the premises in a book I’m writing might be illustrative of how many things you can do with an idea. How to use an idea, but not the words. Let’s play . . .

So . . . my character killed a man.
Then traveled back in time and changed things. The man lived.
So . . . is she a murderer or not?
The crime was not committed (now) but _she_ is still the person who picked up the gun and killed a man.
Is she a danger to society?
Should she feel guilty?
Will she be more likely to kill again, knowing she can “fix” it later?

I love science fiction. You can speculate on so many things. But please, keep the belly button gazing down to a minimum. I want some action, I want to see someone else kill that scumbucket. I want her to realize that killing _this_ person was a good thing. But I want her to realize it while she’s running around doing cool things, saving the world, designing spaceships, or fighting off alien attacks. Possibly, all of the above. She can cry, and have nightmares, so long as she gets up in the morning and gets to work.
I might even throw some romance in there, but again, it’s got to be in brief interludes between action of a significant nature. The main story problem is not how the girl grows up, accepts herself as a person who will do violence if it is called for, and falls in love. The story is saving the world. The rest is background and characterization, a bit of thought provoking gee whiz or oooo weee!
It’s maybe half written. You can check it out next year. But what else could I have done with this basic idea?

I (or someone else) could take that same idea, but aim for a different genre.

It might be fun to make it a romance between the killer chick and her once upon a time victim. She could oscillate between guilt about killing him, investigation to find out if he really had deserved to be killed, nightmares about killing him again and . . . Then I’d have to think up a good story for him. An undercover cop assuming the identity of a real nasty sort who looked enough like him to get away with it so long as he didn’t shave his beard off? A twin brother? A cousin? And now his investigation of ??? is getting derailed by this mystery woman? Yeah, it could be fun. Maybe I’ll NaNo a romance this year.

Looking through my list of genres that the staring premise could be shoehorned into. . .

YA and Christian could be done, with a slight change in ages and with religion added. I wouldn’t do the Christian story because I was raised without any religion at all, and tend to be tone deaf or color blind (or any other metaphor for oblivious you prefer) to religious nuances. And, err, large issues. YA, I could do, but it would be a YA SF. I’d need a different POV character, sixteen years old and, hmm, why did he or she kill that person? Deliberate or accidental?

Thriller? Oh definitely, in fact very well. The fast pacing could be pushed by the disaster she’s back in time to prevent. She’s taking the risk of paradoxing herself into oblivion because she can’t deal with the guilt of having killed this guy. Personal win, along with saving the world or some such. Of course, she might begin to suspect that he caused the disaster . . . I could do a gender switch on this one, big tough guy going back in time to save the world, but does he have a secret agenda of his own?

Western? Eh . . . hard to stick to all the other tropes with time travel added to the story. Hard to carry off. Kind of like how Cowboys vs Aliens was amusing, once.

Historical ditto, but throw in some fantasy, instead of a time machine, and you can have Outlander. So done right It can work. Except I’m not sure it hasn’t fallen out of the Historical genre altogether. Heh. I _refuse_ to make it out-and-out Fantasy. Magic *and* time travel makes my head hurt. (But feel free to give it a go, yourself. You could get rich on what I can’t abide.)

Mystery? Umm, the woman could be a police detective, who inadvertently dropped back through time. She investigates the man she killed before she kills him? I dunno if mystery readers would accept that.

Literary? Eeeeee! Kill it with fire! Because there’s so much belly button gazing, angst and guilt opportunities that it could be done. But of course, in the end, she’d have to kill him again.

But all of these are different stories. Any one of you could grab this idea, even the extended genre ideas, write a story, and it would be completely different than what I would write, even in the same genre. But if it’s got the same words, over and over, the same descriptions. If the same scenes show up with minimal alteration . . . Dude. Really, have some pride, some self-respect. Don’t steal someone else’s labor. Roll up your sleeves and get to work on your very own take on an idea.

All ideas are like this. Want a homework assignment? Take the idea of the last story you read, or one of your own that you wrote. Then pick two different genres and see how you could make it fit each one.

And, just to prove that I can figure out how to add a picture to a post, now that I’m back home: here’s my favorite place to write. Pity it’s only “mine” for a week a year. 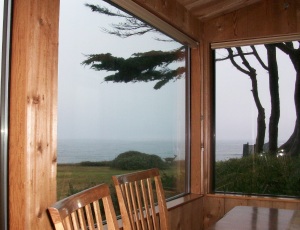 But somehow I didn’t get a whole lot of writing done. 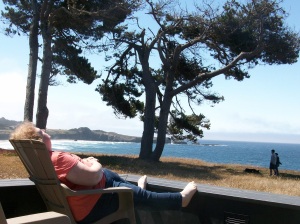 And the obligatory self promotion:

Today is the last free day for the next 90 days.

Magic vs. Astronomical Disaster.
The young magicians of Ash need to grow up fast, else they may not grow up at all.