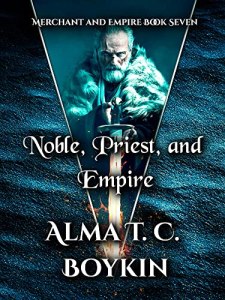 Valdher of the Wilds, Lady of the Forest

Unwanted survivor, failure, Halwende cost his father money and should never have become heir. When Valdher chooses him as priest, no one is prepared for what follows, least of all Halwende.

Sneelah of the Snows, Lady of the Ice

Young in his power, Aglak Rothbard settles long-simmering disputes. With force. Icy-cold force, just like the goddess he serves.
One man seeks to open the raw, new lands in the north for settlement, as his Lady commands. The other seeks to balance rapid change and the desires of a deity reluctant to release her hold on the north. When long-forbidden magic is brought back to light and used for ill purposes, both men and their deities must work together for the good of the Northern Empire. Two men and their patrons, strong in power and stronger in will. Who will be master of the northern lands?

When Cervi and Snow-cat collide, the forest trembles!