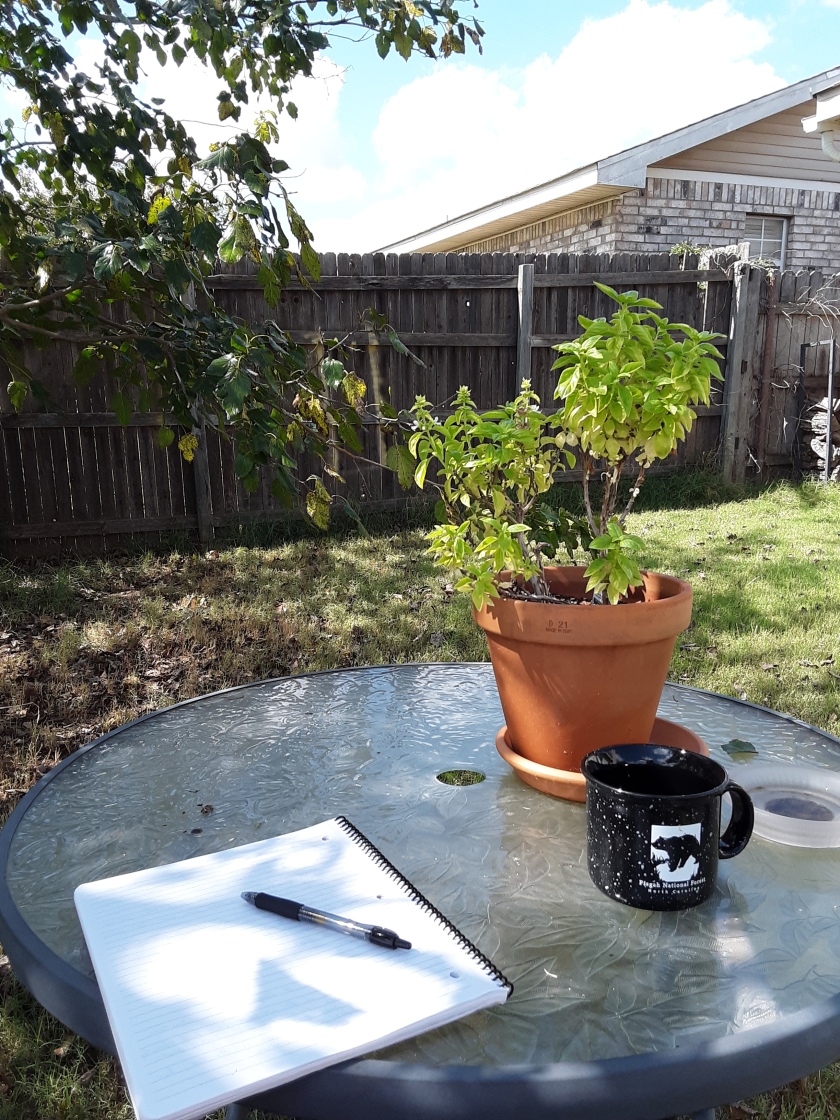 1.) NaNoWriOhH-llNo: For those of you crazy enough to tackle it, how’s it going?

I didn’t intend to try for NanooNanoo, which is good, because about 6 days in, my brain froze on a funeral scene, and instead of working its way through, it went “Hey, you know that story you started and couldn’t figure out how to finish in 2016? The one that, earlier this year, you realized could be reset as sequel to Shattered Under Midnight, but you couldn’t make it work? Here’s how!”

So, been writing that, because, what the h-ll, FIDO.* I can get back to AJ & Jenna after I finish this. Or when I block on this. I got three stories written this year, (the anthology one isn’t published yet), so I don’t have to stress if it takes a while to get the next out.

He’s been struggling to finish anything since the heart attack. But he’s been trying, and now, the first one is done, and the rest may follow. Yay! Silver in the Stones is out to beta readers.

Which means I need to come up with a blurb. Uh-oh. *thumps head on desk*

3.) C.V. Walter went off to 20BooksTo50K Vegas, and I am awaiting her coming back to tap her brain and ask a thousand questions. But there are already some talks uploaded to youtube. Hopefully I will have more interesting info soon, after she has a delightful road trip back.

6.) In the meantime, I have completed a small life goal. You know us authors. Somebody says something in conversation, and we go “Oh, I’m totally stealing that.” Well, it took 4 stories later (6 given some that are small bits of story waiting to see if they find a home later), but I finally used a line I “stole” from her with permission back in February.

I don’t really find keeping old stories useful, not like JL Curtis who can write a scene only to realize it’s the wrong book, and that will be for two books down the line. And when he gets there, it still slots almost perfectly. But I keep them around to spark ideas for something new. And in this case, well, maybe having successfully used this quote, I ought to start keeping a little black book of conversational quips!

7.) And on taking care of myself, I have now managed to rack pull 75% of my bodyweight.

Not a full deadlift, not yet, but for a broken-down high-mileage body that had a few too many adventures when I was younger, not bad at all. Take care of your meatsuit! What are you doing for exercise?
.
.
.
*F-ck It, Drive On. Or, in aviation terms, “Fly the airplane, not five miles back.” Don’t fixate on a problem that happened; tackle what’s in front of you and still to come.