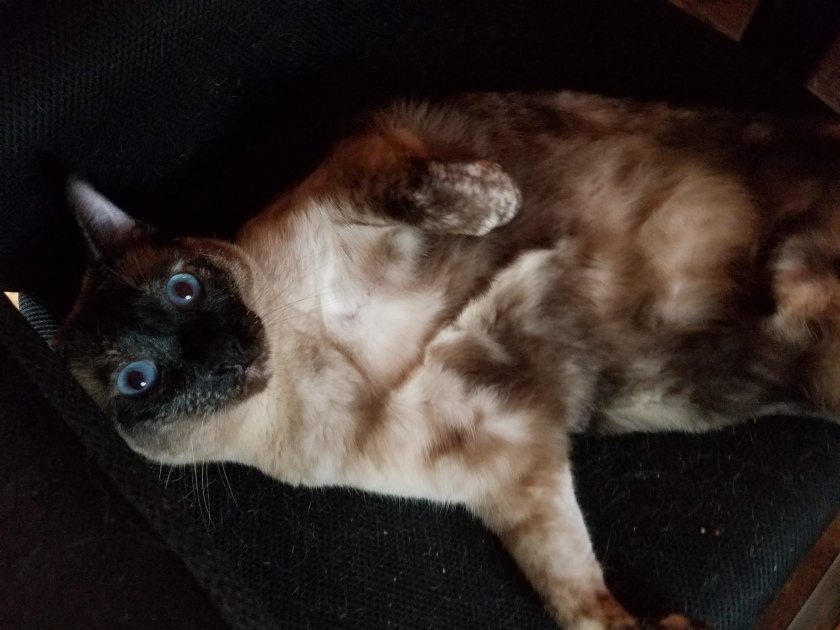 So when I’m on vacation, my brain (or what’s left of it) goes on vacation as well, which is why this post is late. I completely forgot to write it last night and I only just realized this. Sorry.

Anyway, some of you might know I’m a hoarder by nature. I tend to keep things in case I need them at some later date, which brings with it the very Kate issue that whenever I put something away “somewhere safe” I can never bloody find the thing again.

So this week has been three days of hunting through assorted saved paperwork dating back to before I moved to the USA (20 years of documentation… joyous) in search of the Very Important Document that I knew I’d put Somewhere Safe and needed to find.

Two bulging trash bags of obsolete paperwork and a relatively small pile of documents to keep later I finally found the thing – and yes, it was in a safe place. Just not the safe place I’d thought it was in.

Yes I do have a number of storage caches containing various important things. Yes, I occasionally put something in the wrong one. And yes, I absolutely need to clean the bloody things out more often. I also need to win the bloody lottery or otherwise acquire enough of an independent income that I don’t need the day job because I don’t have the time to keep everything organized.

Or rather, I don’t have the time and mental energy to keep things organized. The latter being more of an issue than the former. By the end of a work day, I have a severe case of no can haz brane, and the end of a work week is usually worse. It takes most of the weekend to recover, and then the cycle starts again.

My vacations usually consist of a day or two doing nothing, followed by a slow ramp up to actually being able to think – the sorting I did this week happened in bursts with mental recovery time in between because I’m still thinking through a heavy layer of cotton wool from accumulated fatigue. It’s my life – it’s more or less Kate-normal to be this way, and I’d probably need a week or two of near hibernation to really recover, but I don’t have it so I make do with what I can get. Narcolepsy may be pretty much invisible to the general population, but that doesn’t make it suck any less (probably my biggest fear is that I’ll be in an accident and lose my drivers license because “driving while narcoleptic” can be a thing – it’s not technically illegal where I live, but having to prove to a government body that I’m managing it properly isn’t something I want to do. Public transport is non-existent around here, so no license = no going anywhere unless someone drives me).

That said, I now know where the Very Important Document is, and it’s in one of the safe place caches that makes sense. Whether it will still make sense in a year or two is anyone’s guess, but it’s a reasonably obvious location.

So, have a Buttercup being very relaxed and unlike her normally dignified and regal self, and may the USAians among us all have a wonderful Independence Day weekend.