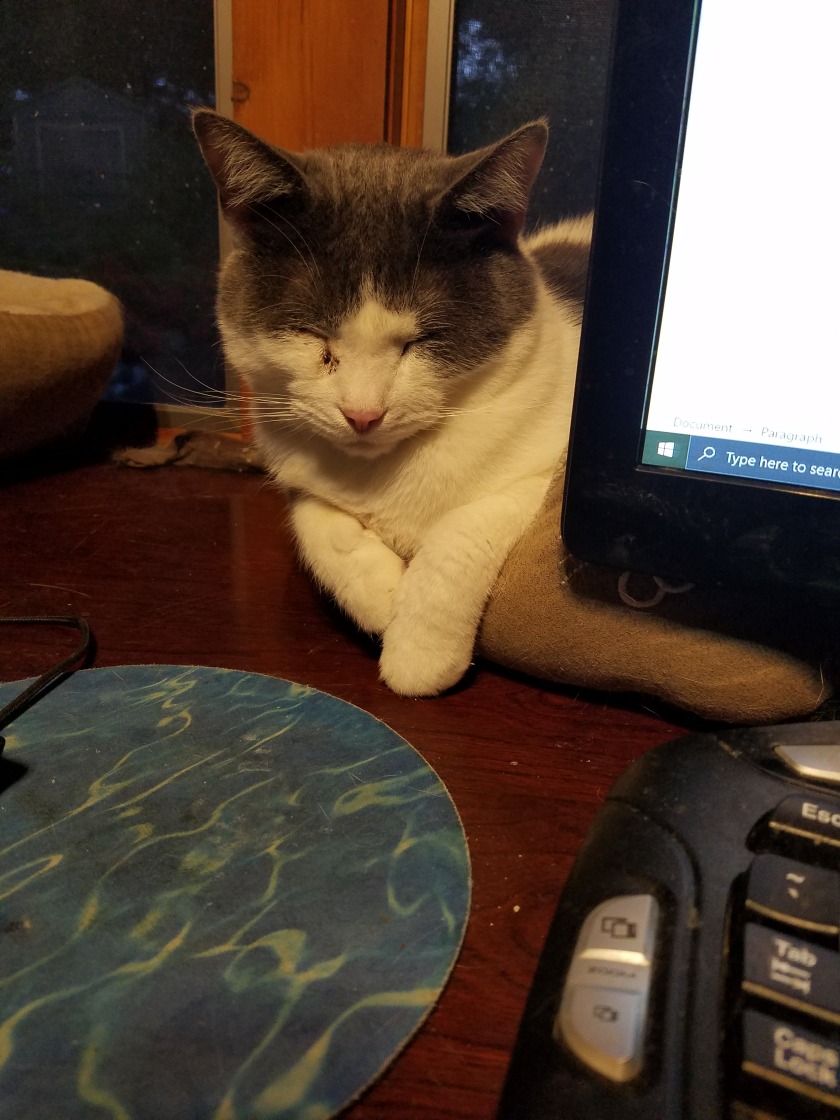 As the resident narcoleptic, this is something I do a lot. I’m doing it now, as a matter of fact. I’ve spent so much time typing, whether for work or other purposes, that I can more or less touch type (without ever having been trained – this is purely muscle memory that doesn’t have anything to do with the official touch typing rules) well enough to type while half asleep (or even all the way asleep) and still produce readable results.

For a given value of readable, I suppose. I do ramble when I’m overtired, after all.

At the moment, I’m counting down the days to a week and change of vacation time. Two more work days, then I can rest and recoup from six months without any time off – which is more or less the norm in my life, but it doesn’t make me any less tired.

It’s a combination of things. I tend to hoard vacation time for when I’ll “need it”, and keep it to two major chunks. One in the middle of the year, and one near the end of the year. I’ve got nearly 4 work weeks to play with, so I’ll usually take a week or so mid-year, 2 weeks near the end, then starting around September-ish I’ll start using up the rest in long weekends.

On top of that, I’ve got an overdeveloped sense of responsibility. You know the type – the one who picks up everyone else’s stuff until they don’t have the energy left to manage their own because somewhere along the line (probably when I was an itty-bitty mad genius and was at the beach with family, playing in the kiddy-sized waves when a bigger one than normal scared the liver out of me and I ran for it – completely forgetting little sister was also playing. Panicked parents tore me a new one for not being responsible, and I got the wrong end of the pineapple) I managed to get the idea that my welfare is less important than anyone else’s.

I kind of hope to be somewhere closer to wakefulness when I do next week’s post, seeing as how I’ll be mid vacation then.

So that’s the state of the Kate. There’s no storms lurking around at the moment, so no chance of the spectacle that happened the other day when a truly spectacular thunderclap had Midnight and Westley practically levitate, spin 180 degrees in the air, and race for cover. I’d swear the legs were going before the paws hit the ground. Really impressive when Westley started from a curled up asleep in the kitty bed position and Midnight was sitting on the air conditioner looking out the window.

Of course, Midnight has already suffered one crushing disappointment today: he was in his spot looking out the window when he heard The Husband coming downstairs, and suddenly there was a thump and a streak of black towards the kitchen in the hopes of the good cat food. Hopes that were cruelly dashed because the three of them had already been fed for the evening and weren’t getting extras. They’re fat enough without us overfeeding them.

Today’s photo is Westley being as angelic as he gets, while he sits in his kitty bed and supervises.