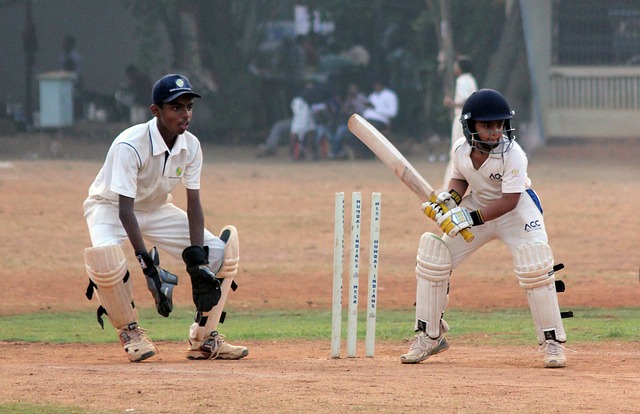 Or it’s not just cricket.
Cricket – not the insect, but the ancient arcane ‘game’ involving the defence of sacred sticks (wicket –now what does that suggest? wicca? Or just wicked… ). It’s actually a ritual with traditional and symbolic positions like Silly Mid-off. As everyone in the know knows, it is really an English traditional rain-dance. They dress up in funny white clothes and make strange cries which are incomprehensible to the uninitiated. At which point the rain comes down, and the ritual being successfully concluded, everyone adjourns for drinks in the clubhouse, where no clubs are kept.
Ok so… that’s what it probably looks like to Americans and to people who didn’t get their countries colonized by the British. It’s quite a complicated game with many non-obvious rules and traditions – and its traditional form goes on for five days or until one side wins. Draws are not uncommon. Play can be very strategic and exceptionally boring (being honest here). My wife is a hard-core fan and my younger son plays for a local club in South Australia – this a recreational club, not a professional one. They made it through to their grand final this year and indeed feeling probably didn’t run quite as high during several wars. We were here to watch it over the weekend. For a genteel game as supposedly played by English gentlemen in the Heyday of the empire, it was… intense. No superbowl set of opposing fans were more vocal and less likely to speak to each other (keep in mind they’re all drawn from a country district and small town and often know each other).
My son’s side eventually lost by six runs (it was a close-run thing, ha ha), and many tears were shed. We were there, and it’s a good thing the players are far off on the field so my boy (now well adult) didn’t hear his mother co-batting every ball. She wasn’t the only one.
Oh, and yes, it did rain, in South Australia (not the time of year for it), but that did not stop the game.
It’s that serious, and that important, that they’re already starting training for next year.
You can certainly learn cricket as an adult. It’s relatively unlikely, and honestly to people who didn’t grow up with the game, puzzling, and not likely to inspire fanatical watching. But to many millions of people it’s close to a religion – they follow it intently and can tell you details about the players – not only their game, but their lives. I’m sure the same holds true for various sports around the world (American Football is as alien to me, but I believe for millions of people it is very similar.)
So why is this relevant to writer? Well, besides the fact that I set an entire book around cricket (which would mean almost nothing to anyone who didn’t know the game…) is the fact that what is important to you may not seem so to others, and contrariwise – what is literally fighting material may seem an irrelevant game to you. Likewise what was life and death to you as a teenager, is hard to get excitable about now. What was important or unimportant 50 years back isn’t now. Life is proximal, and characters, if you want them believable and ‘real’ to readers it’s what they in that proximal situation relate to. I imagine many of the ‘pressing issues’ of today will, by those future readers mean us much as Cricket does to my American friends.
(WordPress has been doing odd things for some of the resident Mad Ones and decided not to play nice with Dave this morning. So I posted this for him. He will be checking on comments and answering you as WP allows.–ASG)
Featured Image by PDPics from Pixabay. Creative Commons licensing.

16 thoughts on “Cricket — by Dave Freer”