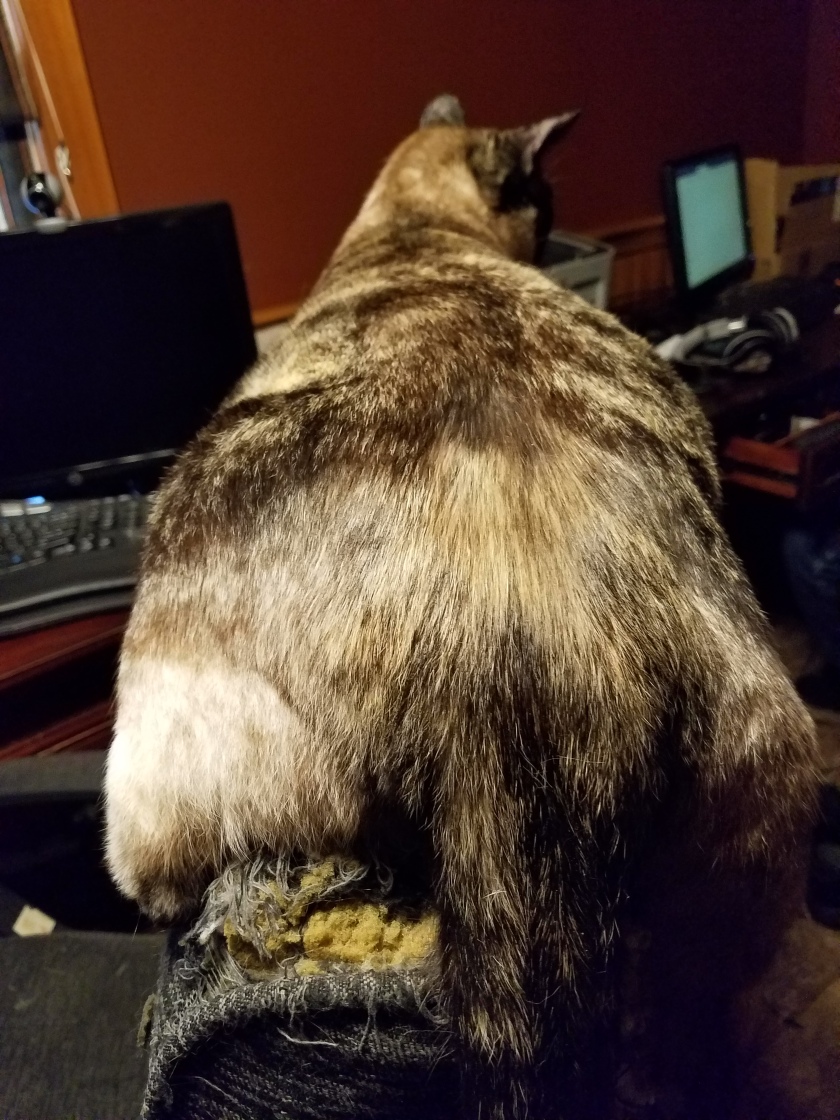 The cats have been rather… interesting this week. Nothing bad, just decidedly feline variants on interesting.

Over the weekend I celebrated the mumble-mumph anniversary of my birth, in commemoration of which The Husband got me a new computer chair to replace the rather sad, flat, and partially de-upholstered specimen that’s been in constant use for at least 18 years. The fact that the chair is still working is little short of a miracle.

It’s a very popular chair. As soon as my backside leaves it, it acquires a cat. Which cat varies – usually depending on which one of the three gets there first, although there have been more than a few feline versions of “animated discussions” over who gets to stay in it. So naturally, as soon as we moved the old chair to the living room as an emergency spare, it acquired a cat.

Since Her Royal Highness Princess Buttercup is Queen of the House and All She Surveys (and don’t you forget it), naturally she made the first claim on the old chair. She’s also had to be… encouraged to allow me to park my butt on my new chair, since I’m the one who needs to sit in it to work. But then, Midnight and the Dread Kitty Westley have also needed encouragement to move their little fluffy bums so I can have my chair, so it’s not like this is anything new.

And of course, since all of them like their high vantage points, the back of the chair frequently acquires a cat – which can be very interesting, since Princess Buttercup is not a lightweight. Oh, no, she is a heavyweight of great distinction – whose elegance and distinction is showing in the featured image.

Which resulted in a resounding thud at some point yesterday evening. Then, when I went to go to bed, there’s the old chair fallen over, and Buttercup sitting on the backrest giving me one of those “What?” looks as if she was completely innocent in the horizontallity of the backrest.

Cue one Kate fit of the giggles and a complete inability to even think about putting the chair back. Heaven forbid I should disturb Her Royal Highness, after all.

She didn’t stay there all night, though, because she was in her usual place on the bed when I woke up in the morning and – as usual – I got to “enjoy” the three-kitty-rampage in the bathroom while I was getting dressed. It is truly interesting trying to put clothes on while there are three cats playing “kill anything that moves and most things that don’t” around you. They usually don’t pounce me but it can still be quite… exciting having a feline suddenly fly up out of the bathtub to viciously maul the evil bath mat (I’ve yet to figure out what the bath mat did do deserve this treatment, but we’ve found it all over the house so obviously it is a Bad Bath Mat and deserves kitty retaliation).

It’s a good thing we love them. They’d drive us even more insane if we didn’t.