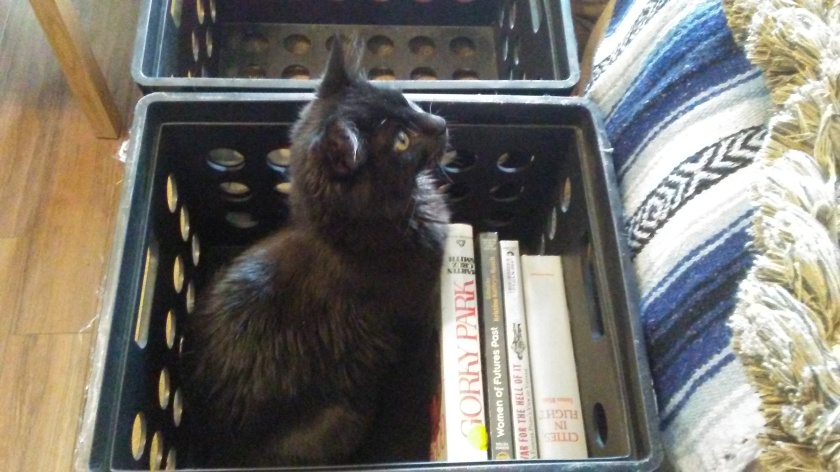 This is Ashbutt. Unlike dogs, I have no fear of naming him on the internet, because cats don’t come when called.

Well, he’s Ashbutt to everyone except one very proper vet tech. She made the name on his file “Ashbottom.” She also noted him as a “smoke point maine coon mix.”

But he’s not very prim and proper, and his grey undercoat wasn’t the reason for his name. He’s a barn kitten who was snuggling up to the firepit in order to get warmth, and singing his whiskers, and getting white-grey ashes all over his black butt when he sat in them. He has a purr that was all outsized for his tiny body – how were we to know he’d grow into his purr? Certainly, we didn’t get told there’s been a maine coon male hanging around the barn shortly before he came into the world.

But he’s more than simply an animal; he’s a story woven into our lives, by a character with his own motivations, and a brain the size of a walnut that has all day to think about how to try to get what he wants. Which is how he watched us, and tried, and tried, until he finally learned to open doors. Sigh.

Fortunately, his general approach to the world is “Dude? Dude. Duuuuuude. Chill, dude, it’s all good.”  (Which is the polar opposite of our other cat.) Unless tuna is involved.

And he’s a connection to community, starting from the first mental image I have of him, which is of LawDog asleep in the sun on a camping chair on a nippy fall afternoon, hat over his face, and kittens curled up all over him and in every pocket.

Later, the farmer, who is a dear friend and one of those weathered gentleman, tough as old leather and for whom the word laconic was made, walked by me, and plopped the little bundle of fur on my chest. As tiny claws sunk into my sweatshirt and a purr welled up like a badly tuned diesel engine, my friend muttered, “You got to take that one home with you. He’s too cute for the ‘yotes to eat.”

I held the little bundle of fluff and purr, and when my husband came by next, informed him, “Well, I’ve been told! Guess we’re taking a kitten home!”