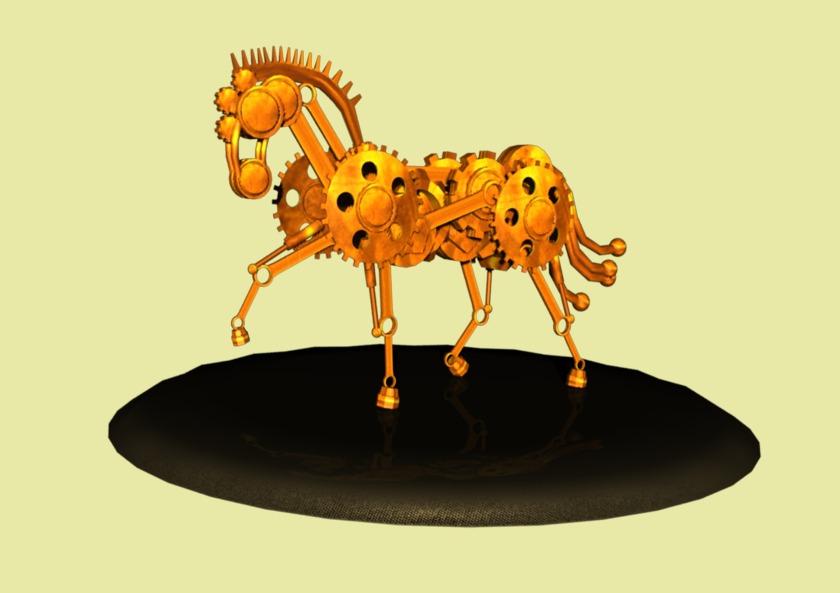 Ah, yes, Diana Wynne Jones famously talked about Horse-bicycles.  How non-horsey people like me will write horses as though they were bicycles, that can start and stop whenever the character wants; never have to eat or be rubbed down, and don’t have to be tied up.

I’m not a horsey person. This might change. It occurs to me horseback riding is not a bad pastime for my old age, and you know, I love all animals (and most plants) so there’s no reason I couldn’t get along with some horse somewhere. As much as I disdain cars and other machines, and suspect them of having malevolent minds of their own, at least horses have mostly people-friendly minds, having co-evolved with us.

But that’s neither here nor there, and though I try to learn when writing horses, I’m sure I made/make mistakes (another reason to learn) and I’m sure I’m not kicked out by things that would kick out people who know horses.

Okay, so I was stuck for about six months reading only Pride and Prejudice variations, which is Pride and Prejudice fanfic for sale on the kindle. (I even wrote one of my own. Well, several. This one was the first I wrote and put up for free at an austen fan site, oh, over 20 years ago. I’ve just pulled them from the free site an am putting it up on Amazon. It’s … insane. Look, I had toddlers, and my husband worked away from the state 5 days a week. Eh.)

This is the equivalent of my wanting to eat only vaguely sweet, tasteless things (bread, vanilla pudding) which is in me a manifestation of extreme stress.  Not depression. That usually involves reading Disney comics, because I can’t understand anything that takes longer than a minute and has no pictures. P&P fanfic I read when I am so stressed I can’t stand emotional stimulus of any kind, even in fiction.  And while P &P fanfic has SOME emotion, it’s usually predictable, and you know — of course — it ends well.

I’ve never been stuck in this phase this long before. Normally I get bored after two weeks. But… well, it is 2020.

Anyway, good P & P fanfic writers are as rare as anything else, though there are a lot of tolerable ones.  (My DIL writes some. It’s good.)

And because I was stuck in it so long, I was giving chances to writers I wouldn’t otherwise try.  Which is why I found an obvious beginner.  I mean, I think he did his cover using P & P cover creator…

His stories are good, the type I like that sticks pretty close to the story.

But he desperately needs a good proofreader.  Most of the errors are those I myself make because my fingers take dictation from my ears.  Sight for site, etc.  Proofreaders catch that.

Others are weird and consistent over his two books, and lead me to believe it’s a lack of understanding of history.   For instance, a woman in his books, always has pen money, not pin money.

I can see how that would make sense to a modern person “pen” sounds like something that would be expensive in the regency, while pin just sounds stupid.  But in fact, pins, that ubiquitous lost thin in our entire lives, used to be rare and hand made. And women, who did most of the sewing for households, bought pins fairly regularly (and they were expensive.) Hence a woman’s allowance was called pin money. (Even if you were a great lady, and your pin money was more likely to go for carriages and services.)

That’s fine.  Made me giggle, but fine.

But building over the many books, I got the strong impression that his headcanon had horses as …. cars. Not bicycles. CARS.  It was just the way he talked about them, plus the very bizarre idea that a great house like Netherfield lacked stables and therefore guests horses would be stabled… at the blacksmith?????

Anyway, all of this came to a head on this sentence:

They started up their horses and road away.

I don’t speak horse lingo, so it’s entirely possible that tchk sound riders make and the shaking of the reins are called starting up the horses.

But in my head? Those horses took off with a vroooooom vroom sound and laid down asphalt as they went.