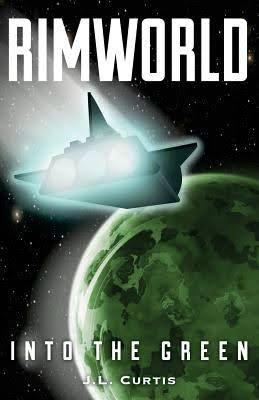 Amongst the multifaceted variety of challenges authors face, there is the tendency to get lost in the weeds. This can happen to anybody. Ever met somebody who is a fan of dragons? Their work will be replete with dragons. In every form possible. This tunnel vision can quickly grow wearisome. Picking up JL Curtis’s Rimworld books, I was slightly wary of winding up stuck in the weeds of naval aviation. Thankfully, that never happened.

Rimworld is science fiction of the military type. Not space opera, but honest MilSF, written by a man who is surprisingly modest about his achievements and his experience. His protagonists are written in a very similar vein. Capable, sparingly modest to a fault, and very much human. Ethan Fargo is (surprisingly) not an aviator (though his character does learn to fly a light aircraft in the course of the first novel) but a former Terran Marine infantry commander. Fargo is not a man who wears his responsibilities lightly. There is no smear across the pages of a ruggedly handsome lantern jawed man sent over from Central Casting to woo the reader. Ethan is simply a man. Scarred and sere, with a lifetime spent fighting for a living.

How he shoulder’s those responsibilities  is a critical flaw in his character, one he must work to overcome across both books in the series. Fargo was involved in a disastrous operation decades prior which saw his command, save for 5 men, wiped out and him kicked out of the Marine Corps. At the beginning of Into the Green he loses his command for a second time, which sends him reeling, seeking solace. Curtis’s book faithfully explores this dynamic of how a professional soldier, nay a professional loner, transitions back into quiet mundane civilian life.

There is far less of the pity party than one would expect from a dramatic Hollywood performance, because Curtis understands men and uniformed service. He sees no need to provide the Hollywood caricature beloved by so many of the simpering glitteratti. This is not simply a story (though it is one) nor a hero’s journey (it is also this), Rimworld is the telling of people, and how they really are.

Fargo’s character is honestly written, with flaws that come through as the story progresses. Fargo is not perfect, he is most definitely not a Gary Sue; as an example, he forgets things or purely doesn’t think of them. Intelligence in the martial sense is not his forte. Thus he wouldn’t think to give orders for a remote drone to be dispatched (for gathering purposes), like one of his subordinates would. He learns though, and he continues to try. This is also true of people and how we function. Nobody is ever 100%, all the time. We make errors somewhere along the way, whether because it’s not our specialty so we don’t think of it, or because we’re tired, or hungry or any of the other thousands of possibilities which come with being human.

Given the care and effort Curtis has put into his other works, I would not be surprised at all to learn that the Ghorkas as portrayed in the story are culturally correct. He is a very thorough man, as evidenced when he shows Fargo’s character hunting dangerous game. You feel yourself transported to that place where a man puts his life on the line against something every bit as nasty as a Cape Buffalo, but with more fangs and claws than any rational human being would care to consider. You’re there, experiencing the success and failure as Ethan survives, but does so injured and with damage to his equipment. Nothing ever goes according to plan. That too is part of the charm of this series: crap happens. Deal with it. Sometimes that crap is trying to kill you.

It’s rare to find an author who possesses the variety of experiences and travel which JL Curtis has, normally. Reading his book is a treasure, not only for how the characters are written, but that he tries very specifically in his world-building to demonstrate a multiplicity of alien cultures, in addition to various subgroups of humans. This lends to the depth and complexity of the overarching story, as well as the reader’s submersion into the series.

I read both Rimworld novels in a period of less than 12 hours, Sleep? Ha! I have Monster and Rimworld: Militia Up was fantastic, I look forward to reading them again.  And I eagerly anticipate getting to read the follow-up novel due out next week. I have no doubt that it will be every bit as believable, engaging, and enjoyable as the rest of his work.