I’ve been asked, since I do art, if I do fantasy maps. Er… no. Honestly, I’ve never really tried. Mapmaking looks cool, but doesn’t spark my imagination the way drawing a dragon does. For my Mom, it’s always been all about designing buildings, especially houses. She used to spend hours designing energy-efficient, flowing use-space houses, and still does using SketchUp. Me? I came to art late, and digital art even later, and my focus for traditional media is botanical, and for digital I’m deep into creating space scenes. However, I completely grasp the coolness of having a map to help visualize the world your characters are going to tread, if you want that to be something other than a mimic of our own. And this week I discovered a nifty way to randomly generate both world maps, and cities.

Azgaar’s Fantasy Map Generator is a fun tool for the writer, or the gamer. It’s a minimalist look at first, but offers deep details if you start playing around with buttons and settings – including the ability to put in your own names for states, cities, rivers and much more. You could spend a ton of time in this. I did not. I was messing around with it to show you all something fun you could use – but I was also mindful that I had fiction to write!

I don’t know if it was my browser, but I was unable to download a jpg file from the generator, which was fine, I just grabbed a png instead. In the generator, you can really zoom in, down to the cities as dots and placement of major routes. You can set the maps to show heightmaps for terrain, or plain, or with artificial divisions like states, religions, diplomacies, and others. The map generated the names you see above, which are interesting, but you can also enter all your own.

You can even edit the terrain! This is interesting, as you could possibly do stuff that wouldn’t work at all in real geology, but hey, it’s a fantasy world! It’s all held together by magic!

As you can see here the possibilities for customization are vast. It even shows you what real language the names are generated from. I have no idea if I will ever use this, because I am a pantser and by the time I need this I will have already set the terrain and names. I suppose with the heightmap painter and name editing I could. Hm. For a lot more support and other user input, there’s a subreddit that exists for this little program.

The other cool little generator is for Medieval Fantasy Cities, and it will give you a new one as soon as you load the page. This one is a little simpler than the world map, but still offers a lot of different detail you can use. 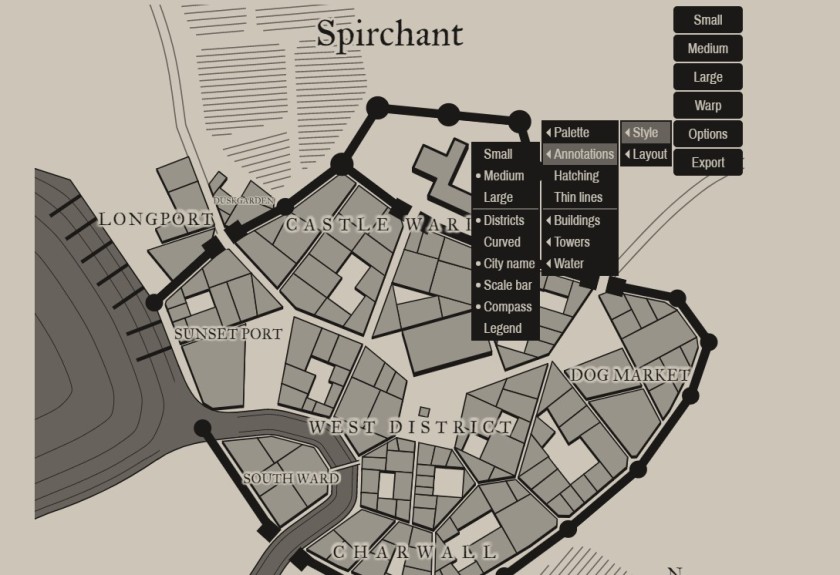 You can either leave the districts unmarked (if you mouse over them, the name will pop up) or mark them as I have here. As you’ll see from my screen shot, there are plenty of ways to add or remove details!

The small, medium and large apply to city size, not image file size. Images from this generator can either be png or svg, and what? I have artist brain! The one above is a medium city, below is a large. I’ve also changed the color and line settings a bit.

And finally! if some friends give you *coff*drawingprompts*coff* or names, or if you just have cool words picked out for using as cities states and boroughs, this might be a handy random generator of such lists. You can plug in the list, and then it will randomize it for you and you can work your way down it. Like I’m going for daily drawing prompts. Because I am still not going to draw my own maps.