The PC Police Strike Again in the Form of Andy Duncan 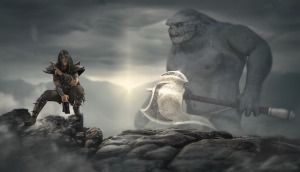 I should be used to it by now. After all, it seems a week doesn’t go by without someone claiming a “classic” book or movie is racist. We’ve watched publishers sanitize books like Huck Finn and Tom Sawyer, as well as others, by changing the “N”-word into something more socially acceptable. Forget about the fact the word was in common usage at the time when the book was written and set. Oh no, we must protect our poor little darlings from exposure to a word instead of using it as a teaching moment.

More recently, we have seen it with theaters refusing to show Gone With the Wind. Why? Because of language and the images it presents of slavery. Gone from much of the theater rounds is Showboat and for much the same reasons. If you do happen to see it, you will find it subtly changed from the original. Hell’s bells, when they showed the live performance of Sound of Music on broadcast TV not long ago, even it had been changed.

And all to be more socially relevant and acceptable to those who don’t want to face the harsh realities of our past and learn from them. I hate the term “teachable moment”, but each of these titles present a number of those opportunities. Moments when we could discuss not only the “wrongness” of something but also how the characters did something right. You know, show our kids that we can learn from our mistakes and become better people.

But no. Better to shield them completely so they can make those very same mistakes.

The latest example of applying today’s standards to something written decades ago comes to us via author Andy Duncan. If you looked at the name and asked “Who?”, you aren’t alone. I recognized the name but couldn’t name a single title he’d written. Neither could most of those I spoke with yesterday after seeing the article that became the basis of today’s post. A quick google search turned up he’s a fantasy writer and he taught at Clarion for a couple of years. I guess that wasn’t enough. Now he has to try to tear down one of the masters of fantasy, J. R. R. Tolkien and his classic The Lord of the Rings.

I’ll admit, my first reaction when I saw the allegation that Tolkien was racist–and against Orcs no less–I didn’t know whether to laugh or toss my iPad against the wall. Then, when I saw that Duncan had written “Senator Bilbo”, the lightbulb went off. Here is yet another author criticizing a long dead master of the craft, and doing so in a way that the politically correct vocal minority in our field, would love him for. If it helps drum up sales for the collection that contains his short story, all the better.

And no, the Senator Bilbo he writes about is not our beloved Bilbo Baggins. Oh, the character he uses is named Bilbo Baggins. He is a senator, cut from the same cloth, allegedly, as real-life Senator Theodore Bilbo (who died more than a decade before LOTR was written). If I remember my history correctly, the real Senator Bilbo was a product of his time and place–the Deep South. Now those traits have been transferred to Bilbo Baggins of the Shire.

“‘Senator Bilbo’ is this parody in which you have this racist demagogue stomping around the world of the halflings, in a sort of desperate holding pattern to keep at bay all the change that is coming about as a result of what seems to have been the War of the Ring,”

But he doesn’t leave it at that. He goes on to say,

That sound you hear is my head banging against my desk–simply because I don’t have Duncan’s head to beat against it.

If that is how he feels, why doesn’t he write his own ORIGINAL work, showing how such an attitude is wrong? Why doesn’t he look at works by lesser known authors and use them for his parody? Silly me, the answer is simple. He couldn’t make as much publicity hay by taking one Joe Blow author as he can by trying to drag down one of the most well-known fantasy authors of the modern age.

It seems the goal today of all too many authors is to destroy the foundation upon which our genres are built. These authors insist on applying today’s rules and mores to works decades and more old. They refuse to look at the history of the author, unless they cherrypick actions or situations that fit the narrative. For example, in all his criticism of Tolkien and LOTR, does Duncan mention this little fact?

The criticism comes despite Tolkien being known as a fierce critic of racism, particularly the Nazi Germany regime in the 1930s and 40s.

And, yes, he brings in politics and Trump. You knew he would. Admit it. How many of these “woke” authors pass up a chance to take a swing, no matter how badly they’ll whiff, at the current Administration.

It is easier to demonise one’s opponents than to try to understand them and to understand the complex forces that are leading to, for example, refugees trying to cross the southern border [of the US] legally or illegally.

‘It’s easier to build walls and demonise them as “scum”.

Duncan, and his supporters, make much of the fact that you have Light and Dark, good and bad, and certain “races” fall squarely into one or the other. Okay, life isn’t like that. There are nuances to each of us, some good and some bad. However, this is fantasy. From the beginning of the first tale told around the fire, it has been good vs. evil, light vs. dark. Just because we are more “enlightened” and more “educated”–I won’t say more mature because I don’t believe it–that doesn’t change. Tolkien wrote a nuanced series of books, and his characters were products of their environments.

As someone who has read everything Tolkien published while he was alive and much of what Christopher Tolkien published of his father’s work after his death, all I can say is that Duncan is full of it (and yes, there are two letters missing from the beginning of that word). Not that he or his supporters will ever admit it. Just as they have tried to remove so many from the history of our genre for bad think, now they are going after Tolkien. They can’t allow anything to stand, even as a teaching moment, if it doesn’t fall into lock step with with their agenda.

What they don’t understand is they are opening the gates for folks to do the same thing to their work and it won’t take decades or more for it to happen.