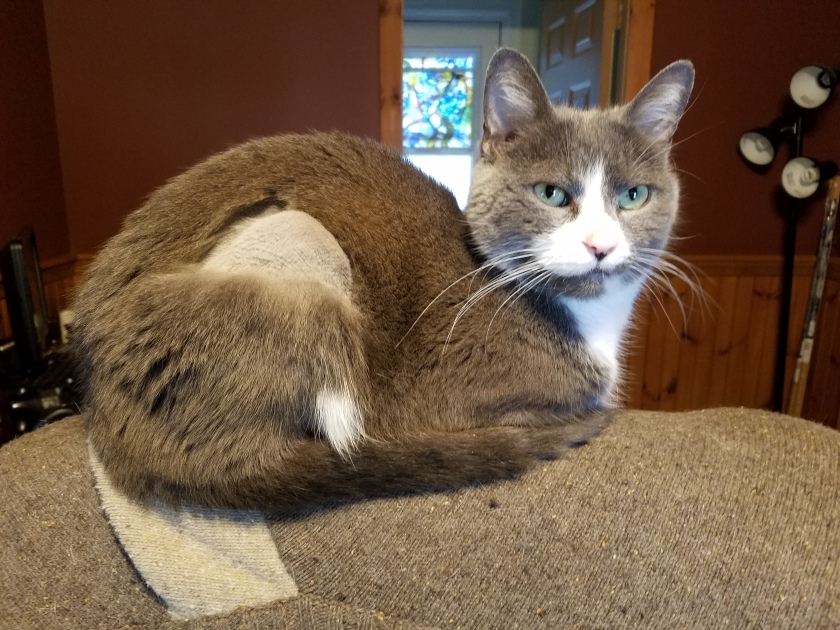 Not that it’s remotely surprising, since his Buggerness emerged from the endoscopy with the specialist’s observations that he’s hardly got any normal intestinal lining left and they had issues with getting biopsy samples because it kept wanting to bleed. He has mostly recovered from the trauma, except that having tubes run through his insides has upset said insides enough that Tuesday evening included an emergency vet appointment to get him rehydrated (a shot of whatever the hydration fluid is) and a shot of what the vet described to me as kitty immodium to try to slow things down enough that what he eats doesn’t go straight through so his medications have a chance to actually work on him before they emerge from the other end.

Today, Thursday, he sees the oncologist and we will hopefully have kitty chemo prescribed to help get him sorted. According to everyone so far small cell lymphoma does have good remission rate and good prognosis with the usual treatments, and we already know the steroids work because he started acquiring growths in the lymph nodes on the reduced dosage we needed in the lead up to the endoscopy and biopsy.

I just hope the meds settle his digestive system to the point where we stop dreading the sound of kitty butt-splosion. Because hearing that splurt sound and knowing the smelly cleanup that follows – and knowing how unpleasant it has to be for the poor cat – is all kinds of not good.

(Yes, that’s him in the picture. After his ultrasound a year ago. He looks thinner and less contented now)