Over and over and over, sometimes three or four times on a page, for two or three pages.

We all, as writers, have problems that seem to return. We might not even be aware of them until someone from “outside” says, “Hey Bob, you used ‘very’ eight times on this page. Really.”

In my case, my mind will find a word and repeat it. The usage is always appropriate, but using “really” six times on one page is not good. That is, unless you have a character with a verbal tic, or you are deliberately emphasizing something for a reason, like foreshadowing.

The first time, it was “very.” Thanks be, Nas Hedron, super-editor, caught the problem. Rather than try to fix it all himself, as he was doing with other copy-edit things, he just flagged every usage and sent the manuscript back with a note recommending that I change or remove most of them. Having to go through and do it myself really opened my eyes to the problem.

I manged to remember the lesson for several books, before a new word crept in, suddenly. Suddenly, that word appeared on every page. A character might be sauntering, when suddenly… And then suddenly…

So what do you do? First, if you are a brand new author, I strongly recommend hiring a good editor for your first book. If you can find someone like Nas, who can catch tics and bring them to your attention, he or she is worth every penny you pay and then some. You probably don’t even realize that you are doing it.

Since I know that I have a tendency to repeat a word to death, I keep an eye open during the review/revise phase of writing. Most recently, I started to get a sense that “really” was appearing a little too often. Nine times in two pages is really too much, I’m sure you’ll agree. So I went up to that little box on Word and did a “Find all.” The manuscript looked as if someone had splattered egg all over it (yellow highlights). Yes, I really had a problem. I removed about half the “really”s, replaced another quarter with a different intensifier, and left the rest, so long as there were no others in close proximity.

You might not repeat words the way I do. You might fall into the Tom Swifty trap (“Run faster,” said Tom hurriedly.) You might go through a phase where you write so fast that you omit dialogue tags [guilty] and then have to figure out who said what to whom for two pages and more. You might—gasp!—overuse punctuation—no! Really? I remember one fantasy novel where it reached the point that if the heroine “played with the end of her long, soft curl” one more time, the book was going to go flying. One page later, it flew.

Does this mean your characters can’t have a repetitive action unless you are showing that they are OCD, like Monk? No. Auriga “Rigi” Bernardi giggles a great deal. But she knows this, tries not to do it, thinks adults don’t giggle, and so on. It is part of her personality that bubbles out.

Watch out for tics.

Edited to add: For those looking for a book about dragons, and a wild river, and magic, Daughter of the Pearl is now available. 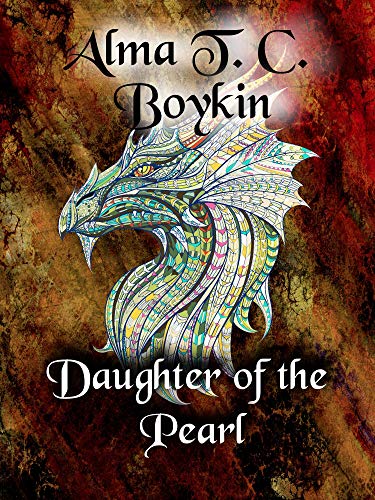 Lord Chang thinks he can find a Chosen One, then return to a life of idleness and pleasure. Little does he know…