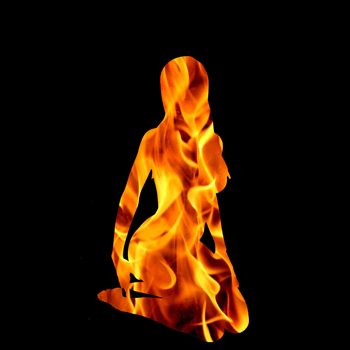 “I feel my very existence threatened,” the Sila said.

Mr. M. cast a sardonic eye on the space she claimed to occupy. “How is that new? You’re only a shadow of smokeless flame anyway.”

“I can manifest myself to mortals,” she snapped, rapidly flashing into view as a beautiful almost-human woman, a serpent with flames flickering along its scales, and a cloud of blue smoke. “And at least I’m not limited to one form. Don’t you ever get tired of slithering around as a metal snake attached to an ugly turtle head?”

“They swell in sapphire smoke out of the blue cracks of the ground, They gather and they wonder and give worship to Mahound,” Mr. M. quoted, loftily ignoring the insult.

“Your Kipling obsession gets old very quickly,” said the Sila.

“Illiterate djinn! That was Chesterton. And he goes on to describe much what your current master is demanding: ‘And chase the Giaours flying, night and day, not giving rest, For that which is our trouble comes again out of the West.’”

“Well, I won’t be chasing anybody if your progenitor doesn’t stop reading her reviews. The most recent one complained about her introduction of one non-human creature – that would be you. Now she’s wondering how that reader will feel when he meets a Hindu God and an Islamic Djinn.”

“The Master of Ravens was not a true god; he was only an imitation of the god Shani,” Mr. M. corrected her.

“Details, details. I tell you, she’s on the verge of deleting me from the book!”

“Oh, don’t get your flames in a flare-up. She isn’t that fragile. If anything, she will end up even more determined to give you a major role.”

“She isn’t that stupid, either. She knows she cannot delete me; I’ve been with her since the first book of the series. And you are safe too.”

“Annoying though you are, you are integral to the plot.”

The Sila’s flames flickered in sinuous, winding patterns. “So I am. I am also the most interesting character in the book, and by far the most beautiful. All the same, I wish she would not get all wobbly over the slightest little criticism.”

“So do I,” Mr. M. sighed, “but trust me, she will get over it. I fear such insecurity is in the nature of writers. In the old days it was easier to persuade them not to read their reviews.”

“Oh, yes. All one needed to do was point out how expensive subscriptions to Publishers’ Weekly and Kirkus Reviews were. Now writers can check their reviews on Amazon daily for free.”

“Perhaps,” the Sila suggested, “we should offer a protective service.”

“We will look at the Amazon reviews daily and send an email summary to the writer whenever there’s something new. That way we can tactfully gloss over anything that might upset her.”

“Good idea, but she’ll never buy it. You wouldn’t believe how paranoid that woman is about forking over her email address!”

“Do you have an email address?”

“Naturally. Babylonmage@mesopotamia.com. What about you?”

“Hotmail, obviously.” The flames gusted up and died down; the Sila had departed.