“A dream is a succession of images, ideas, emotions, and sensations that usually occur involuntarily in the mind during certain stages of sleep.”

Frankly I think it’s file cleanup and de-rezing the wetware so we can function the next day, but whatever it is, I really like dreaming. It helps sort out plot problems and throws all new situations at me.

Dreams can be like brain storming—throwing out ideas as fast as possible and only analyzing them later. And they get pretty wild.

The flat-out weird dreams are my favorite.

My Zoey Ivers books? Half BSing on the internet, meshed with this totally bizarre dream . . . I mean bouncing balls that thought they were Elvis, Einstein, and Benjamin Franklin?   A computer that thought it was a T-Rex? My Dad the FBI agent walking out into a cyber desert to fight a gigantic rattle snake? WTF?

I got up at 3AM and started writing that one down. Turned into a two book YA adventure. There will be a third book Real Soon Now, and maybe more later. 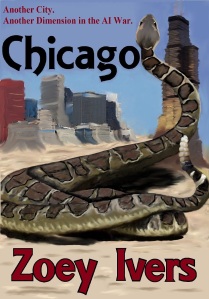 OK, maybe last night’s that ended with one of my fictional characters screaming in the back room while she was being tortured wasn’t one of the better ones. (Eek! Not Rael!) Was my subconscious trying to tell me I have to be more brutal to my characters? Was this a message that I’m only showing the good side of my macguffins and eliding past some obvious problems.

Maybe it was just free association in a sleeping brain. No deep messages needing dream analysis.

But you know the thing about nightmares? You can play around with the ideas. How did your character get into this fix? How does she get out of it? Be creative. The above nightmare? Oh please, Rael was screaming so the guys in the next room didn’t realize she was actually loose and beating up the torturer, collecting interesting improvised weaponry and so forth.

And yeah, that kid in the dream has a problem! Or maybe he is the problem!

No doubt it’ll all show up in a story down the road.

If I go to sleep thinking of the possibilities for the next scene . . . Okay, it mostly keeps me awake . . . but sometimes an idea falls into place.

Sleep apnea was actually great for this. Once I got that really fun overnight test, I realized that I wasn’t actually just laying there awake, thinking about the WIP. I was flipping between REM sleep and awake so fast I wasn’t recognizing the dream state. But I sure planned some good scenes that way. And typed them half-asleep the next day.

I almost miss that. But with an oxygenated brain, I have plenty of uninterrupted dreams to stock the idea cabinet.

Oh, and the new book, a complete stand alone unconnected to anything I’ve ever written: