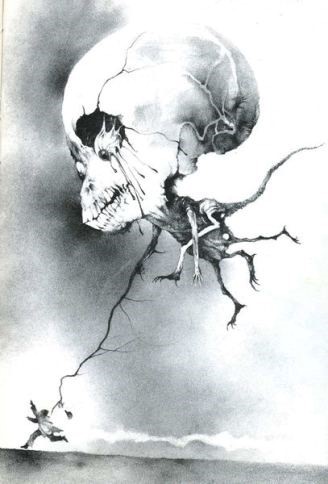 This is a guest post written for me by the lovely Amanda Fuesting. I’m at the Fanboy Expo in Knoxville this weekend, but I’ll try to look in at the comments. Maybe. It’s going to be busy (fingers crossed). We’d been talking about the book series she discusses in depth here, and I asked her if she wouldn’t mind elaborating on it. I blogged about it over at my blog, too, talking about the changes publishers are making to classic children’s books, and why. Amanda picks up with why scary stories can be good stories, and shielding kids from them isn’t a good thing.

When I was a kid, Scary Stories to Read in the Dark were already classics of childhood horror, despite being fairly young books in the market. Older kids passed them to younger kids in an attempt to scare them silly. I was an eclectic reader, like most of the odds who will actually end up reading this blog. By the time these books came to me, I was already reading books above my maturity level by quite a bit. I thought that these would be kid’s books, and not all that scary. The pictures on the front covers were deliciously creepy though, so I gave them a shot. I was honestly terrified. So much so that I went and bought my own copies later on when I had some spending money. I read them until they were worn to bits.

There’s something about fear that makes a person feel alive, but what made these books truly scary wasn’t the stories. They were a collection of urban legends, campfire stories, occasionally dramatic retellings of real creepy events and the like. The author even put references as to where he found the stories in the back of the book, and occasionally included notes as to how make your telling of the tale as frightening as possible. What truly made the books frightening on a soul-deep level were the illustrations. Seriously, look at this picture:

That illustration (from the story The Haunted House) is so iconic that it is immediately recognizable by anyone who has ever read the book. She’s staring directly at you. You are in that house, and you cannot escape her pain and anguish. Coupled with the story, it’s terrifying. Stephen Gammell, the artist, reached directly into my soul and implanted the horror deep into my young mind. At 32, I still get a little tingle of fear when I see some of his images. I recently found out that the publisher had replaced the illustrations in the book several years ago, starting with the 30th anniversary edition. I was livid, and I’m still angry. This is the new illustration for that story:

It’s just not frightening in the same way. Brett Helquist is a fine artist. I adored his work in Lemony Snicket’s Series of Unfortunate Events. However, his style of art is not right for Scary Stories. They’re more silly than scary. They don’t really add anything, and that’s the rub. Gammell’s illustrations worked with the stories. They added to it. Sometimes subtly, sometimes not. Sometimes they had nothing to do with the story, but they got you in the right frame of mind for a good scare. Take, for example, this illustration:

The story here (Is Something Wrong?) isn’t really scary at all. It ends with the character being tapped on the shoulder by the horrible monster, which politely asks, “Is something wrong?” And then there’s the illustration from T-H-U-P-P-P-P-P-P-P!, a funny story that ends with the ghost blowing a raspberry.

The illustrations at the start of the stories are frightening; the endings to the stories are funny, producing a sense of catharsis. The two work hand in hand, and they’re effective. Now, one could ask what the point of terrifying children so badly that over 20 years later they still shudder a little bit when they think back on the stories. All the really horrifying things that happened in the stories are the product of humans doing bad things. In Just Delicious, the ghost of a woman who had the liver cut out of her dead body returns and kills the man who ate it. The man in question was an abusive husband, and his timid wife cut out the dead woman’s liver in order to avoid his wrath. Bad things happened to him because he was a bad person. In Harold, the much abused scarecrow came to life and skinned one of its tormenters while the other fled. The actual “monsters” were mostly harmless, and occasionally just funny.

We can all think back to things we read as a child that stuck with us. I bet more than half of the people reading this can still recall vivid details about books that we haven’t read in 20 years. Those stories spoke to us, and we cried at the death of a favored character or cheered when the hero triumphed. We also thought about the stories, and we learned lessons that we carried with us into adulthood. They shaped us into new and hopefully better people.

Like all good stories, scary stories also teach. That’s the real point here, and it’s one that all story tellers can use. A story has to slip past the reader’s conscious mind and speak to their imaginations in order to really be memorable. Readers of Lord of the Rings learned about honor, sacrifice, not giving up in the face of hardship, and how even the most unlikely person can still be a hero. The lessons are gentle, slipping into children while they read their adventure. In Harold, we learn that the universe exacts justice from cruel people. The lesson slips in with the fear, and it sticks there in the child’s subconscious. The change in illustrations means that those terrifying lessons won’t stick as well, because the reader isn’t scared to their cores.             Frankly, I think that’s sad, and I have already bought a copy of these books with the old illustrations and directed a good friend to where she could find copies for her daughters. If I have a child one day, I want them to keep the lights on for a little while longer while they enjoy their good scare, and I want those stories to stick with them so that they shiver a little bit when they are 30 years old and remember that story.  I want them to remember that the truly scary things in this world don’t lurk in the dark, but hide in the depths of the human heart.