“Could you fancy me as a pirate bold,
On a longship, Viking warrior with the old gods on his side?
Well, I’m an inshore man, and I’m nobody’s hero,
but I’ll make you tight for a windy night and a dark ride.
Let me take you in hand and bring you alive…”

CHANGELING’S ISLAND’S e-Arc is out and available. This is the cover. 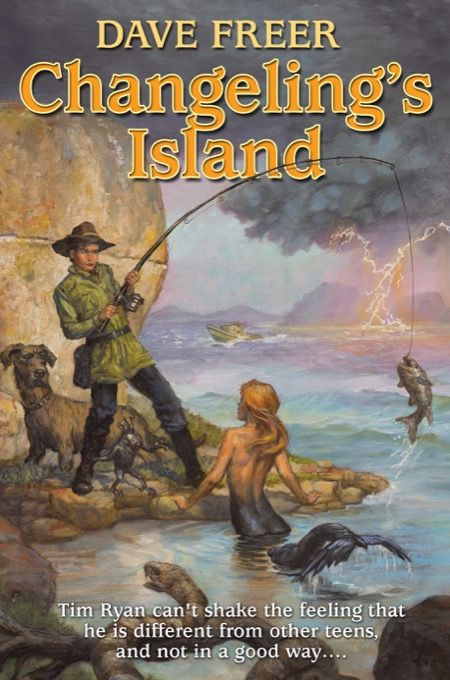 I wouldn’t take too much notice of the blurb on the site. I wrote the book and didn’t recognize it. It’s something of a paean of love to rural Australia (probably rural anywhere), and to my people. If you enjoy my books, if you enjoy my occasional snippets of island life posted here, if you love the back country and wild places, if you have hunted your own food and have some grasp on what farmers and fishermen do to get that food to your supermarket shelf, if you understand what it means to ride the swells with salt-spray slashing at you as you battle the wind and sea… and how that all brings you alive, then this book is for you.

If you’ve done none of this, but are interested in what makes people like me tick, what brings me joy, what leaves me feeling, by God, I’ve lived, and how I love being able to do it, you will come out of this book understanding it a little.

If you want a straightforward adventure story with an element of fantasy that seems as much part of the place as its ancient granite, well, this is a good book for that.

If you want angst, paint-by-numbers political correctness and tokens, want that frisson of underage and explicit and bizarre sex, or are an urban slug who detests anything that isn’t a large city, and regards the people in flyover country as stupid red-necks… there’s a whole lot of award winning books you will prefer to this. While it’s unlikely you’d read my books anyway, I would recommend you buy something else.

I know, I should be a good capitalist and take their money. They’re going hate, abuse and libel me, attempt to denigrate and destroy, without reading or parting with their cash. I’m always puzzled by authors who are happy to let readers know they despise them, their way of life, their politics, their attitudes, but still expect those same readers to spend their money buying their books. I’m not one of them.

Talking of money, I was amused to see and read this – which is a far cry from where the Society of Authors was a few years ago, when they came across as the lapdog of the traditional publishing industry. It’s a sea-change that they’re daring to tell traditional publishing what ought to have been said long ago (by someone besides the MGC crew – who have been banging this drum for years). Personally, I doubt the industry is going to listen to their ‘CREATOR’ list, but really what is needed for Traditional publishing to survive is to stop trying to lawyer their way to survival – all that is doing is pushing more authors into Indy (and boy has the attitude there changed – in private at least – with, suddenly authors in my field admitting the industry leaders have screwed up and screwed them over. You’d have been burned at stake for that — by the same people — two years ago.)  And oddly, Indy authors seem interested in having a good relationship with their readers and providing them with what they want. That’d work for Trad Pub too.

Anyway – I need to get back to proof reading – but I must make mention of the fact that a couple of ‘brave’ SJWs have succeeded in getting Vox Day banned from Goodreads – as best as can be established for the terrible crime of badthink, for doing wicked stuff like organizing to write reviews of books he and his friends had actually read, and vote for or against books they chose to support or dislike.

When they came for Vox Day we said nothing, because we are not Vox Day… well, no, I didn’t, even if I am not.

I’m not a Goodreads user, but this will not end well. Freedom of speech and opinion are fragile and we ought to defend anyone and everyone’s – especially those we dislike – access to them. Censorship never stops by itself, but needs to be stopped. And no matter how you feel about Vox Day: the worm turns. It may be your turn, or the very people who took these steps turn, next. They do not make it easy to defend them, do they? Anyway, I would have thought they’d have learned ‘un-platforming’ hasn’t worked on him in the past and I see no reason it will this time.