Einstein once said that stupidity has no limits. The optimist in me wants to believe otherwise, but the events of the last week have killed that. Apparently the entirety of the NYC SF/F publishing community resides permanently in an alternate dimension where consequences are things that happen to other people. Or at least these people think so.

Yes, I am referring to Ms Gallo, whose apology for calling her company’s authors and customers “neo-nazis” and “unrepentant bigots”

and a whole lot more amounted to “I’m sorry you got upset when I called you neo-nazis and unrepentant bigots”. As for the “personal page”, when a highly-ranked exec of a company posts about a book from their employer, in which they were involved, complete with a taunt aimed towards Sad Puppies, well, most companies reserve the right to fire anyone who sullies their reputation, which Gallo most certainly did. 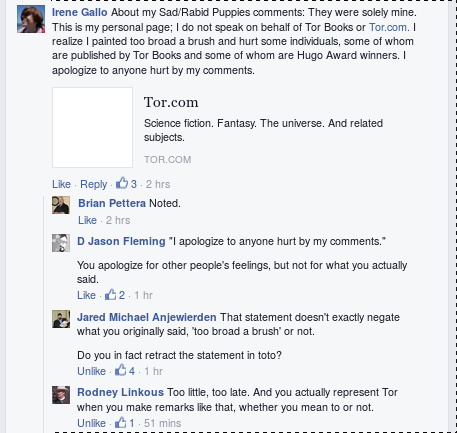 As a Sad Puppy supporter and the organizer for Sad Puppies 4, I have to say I’m horribly offended by all of this.

I mean really. I am Kate the Impaler, charter member of the Evil Legion of Evil. And this woman thinks calling me “unrepentantly racist, misogynist, and homophobic” as well as part of a “neo-nazi” group is going to shut me up? Puh-leeze, lady (Given that she responded to polite requests and corrections with cat pictures, this is about the level of maturity on display).

For starters, the Evil Legion of Evil is not Nazi, neo or otherwise. As if we’d associate ourselves with those losers. Seriously, how can an Evil organization expect to be taken seriously if it models itself after a political ideology that started by kicking out some of the most competent people in the country, and went on to our world’s version of “Never start a land war in Asia”, invading Russia.

We are most certainly not racist, misogynist, or homophobic. How could we be when half the ELOE’s founders are female, when the International Lord of HATE (Hi, Larry!) is Hispanic, right alongside Her Draconic Majesty, The Beautiful But Evil Space Princess, Sarah Hoyt. We even have a Brain in a Jar, and a Powder Blue Care Bear with a Bleeding Heart And a Flamethrower, two Redheads of Doom (no one really knows which one is The Redhead of Doom and which is the Other Redhead of Doom). I’m not entirely sure how one classifies the sexuality of a brain in a jar (presumably sapiosexual) but I’m not going to be the one to ask.

Is that not a truly diverse group of people? I haven’t even started on the Vile Faceless Minions or the Mini-Onions in the Tower, or… Oh, nevermind. These twits will never believe a word of it anyway.

Take it from me, the ELOE is as equal opportunity as it gets. Every minion, regardless of age, sex, or anything else, gets one chance to screw up. After that, I start rounding off the stakes and Genghis Kratman starts assembling crosses so we can line the roads with examples of what happens to minions who can’t manage their one simple task. All very meritocratic. Anyone can rise from a Vile Faceless Minion all the way to a Valued Minion, and even earn a Name.

Hmph. I need to go prepare a special stake. Nicely rounded and smoothed, with plenty of lubrication. Someone needs a lot of reflection on her failures, starting with an extended lesson on what constitutes failure.