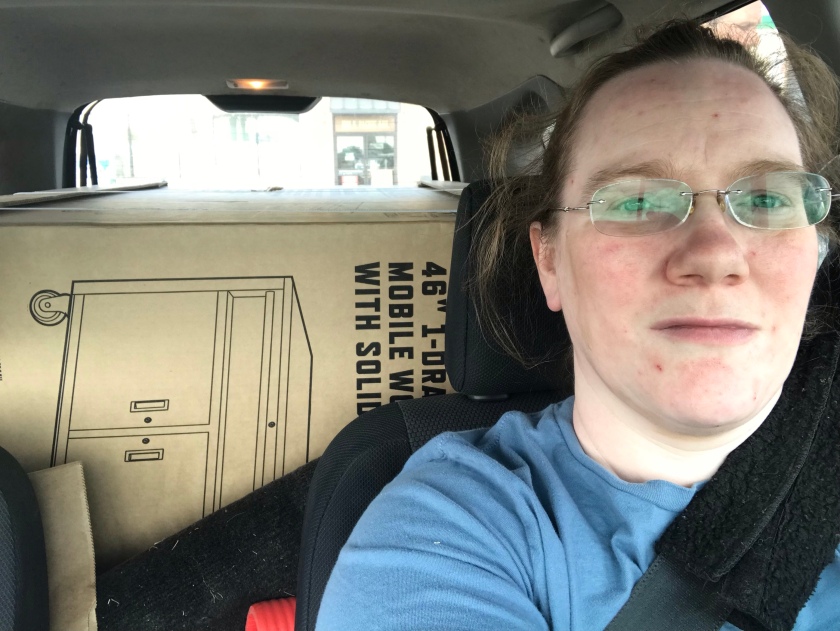 Which, I suppose, could be describing a breakfast, but in this case I was thinking about the Kitchen Island Caper of this last week, and how it applies to me as a writer. Which might, perhaps, be illuminating for other writers.

I mean… that’s a really fun story seed. And Dorothy Grant is just the writer to have come up with it, naturally! But no, I was actually in the cookbook channel seeking input on kitchen islands because inevitably I’ll overlook some pertinent thing, and it helps me to make a decision on something big if I have people to bounce that off of. In writing, this is the role of alpha readers. You might not wind up writing what they suggest, but often enough, as Dorothy pointed out in another conversation, you respond with “No, they would do it like this…” and you are off and running with the story again.

The problem I wound up having was two-fold. One, I had a lot of options for the island. No, not the cracked-planet crust upwelling of deep lava… compleat with Fortress of Doom!! This was more like finally having the funds, the kitchen, and the inclination to buy the kitchen island my husband and I had been dreaming about for years. Only, when we went on our date which included shopping all the home improvement stores (what, you don’t plan a date like that? It’s a great way to get on the same page when planning a shared nest, I assure you), we realized that we could choose something other than the specific rolling tool cart with wood top we’d drooled over. For one thing, the store that carried that one told us sadly it was out of stock. The clerk brightened up ‘but it will be back! just as soon as they unload some containers from China!’ We went home that evening and pulled out the tape measure, looked at the kitchen from all angles, pulled up measurements on websites, and made a decision. The next day I went to pick up the wood workbench we’d settled on (I’m short, so the workbench seemed like a better counter height). I got up with the little slip to the checkout, and the clerk looked at it with dubious eyes. My heart sank. Sure enough, after looking it up on his computer, he broke the news to me that despite their website assuring me there were three in stock, it would be ‘maybe two weeks, then we’ll have it again.’

I went home empty handed. And this is when I had the little eureka moment about my own brain. I have these repeatedly, you should know. You’d think, having achieved my fifth decade of life, I’d have figured out what makes me tick, but you’d be wrong. When I am focused on a big project – like, say, writing a story or a novel – I have to finish it before I can tackle another one. If I don’t finish it while I’m in focus, I tend to never finish it. Or it’s a huge effort to get myself back focused on that specific thing. I suspect not everyone is like this. Some people can set a thing down, and come calmly back to it later. I cannot. It’s part of the reason my writing output the last couple of years (and for many, many years before I did finish my first novel) was short stories. I could finish those in the time I had available. I had to get my kitchen island project finished, before I could move on to the next big project.

That, and I refuse to depend on the Supply Chain Fairy. Very unreliable sort, will let you down and string you along… So I headed back to the store and got my Plan B island. The helpful kids at the store brought it down to my car on a forklift, and we assured them it would fit (the truck is laid up for repairs, but my little SUV will surprise you with what it’ll hold) and it did. Home again, home again, jiggety jog. Minor assembly later, outside, I rolled it into the kitchen and admired it in place while sharing a pickle beer with the First Reader. Minor assembly at 103F will leave you drenched and craving salty electrolytes. It’s done. I pottered around the kitchen this morning, putting things in it, and on it with heavy magnet hooks, and I’m quite happy with the size of it. It’s tall, but we could change out the casters (or remove them entirely) if we want. Or my dear First Reader could wind up with it in his workshop.

Best of all? I have it out of my brain and now I have room for finishing up the story that’s due July 1. No, it’s not got an island in it. But that would be a fun one to write. I mean, you could order a house through the Sears & Roebuck catalog. Why not an island lair? Just don’t get the Wish version…