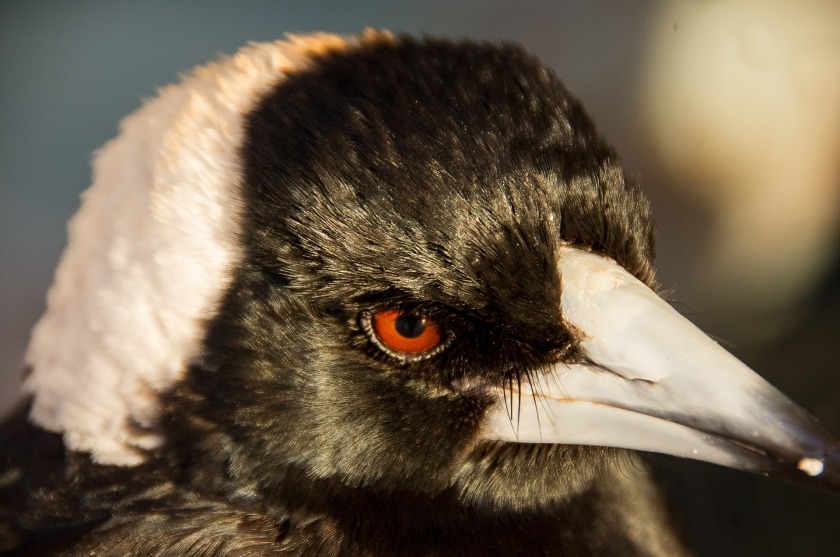 Alas. I had just thought of something interesting and insightful to post and I was distracted by the sight of the dog we’re baby-sitting having a staring contest with an Australian magpie on the porch. My mind, ever ready to say ‘oh, squirrel’ got involved in the staring match… and now I can’t remember what it was. I did go and look up Australian Magpies.

Chasing different threads of thought and a mind that really is all over the place is both a curse and near-necessity to a writer. I now know a lot more about Australian Magpies than I did previously, and in that chaotic network of semi-logical trains of thought that passes for my brain it’s going to co-mingle and curdle with all sorts of myriad other pieces of information and apocrypha. Other fields require you know a lot about them. Writing (especially sf and Fantasy) it helps you know at least a little bit about everything. You have to be a bit of a magpie, you might say, although perhaps dive-bombing pedestrians and cyclists, while understandable, is not strictly necessary.

That’s what I keep telling myself anyway, as I try to check one of my various bits of errant knowledge and end up several light-years away and twenty-seven web-pages later, and half the afternoon gone. Fortunately, I do remember a great deal of what I read, which tangles itself into other stories. Generates them even. Anyway, that is my story and I am sticking to it like glue (which can be made from an amazing number of things. Trust me. Animal, Mineral and vegetable, flesh, fish and fowl – even magpies).

The downside with all these ‘asides’ is that a 2 minute check can end up being a 3 hour digression and the book does not move forward. The other downside is… well, I actually write very complex books. I go to a great deal of effort to keep them simple to follow and easy to read, but they can be rather labyrinthine from the inside – lots of little moving bits that have to interlock (and can be swallowed by small children – mostly by them distracting me). And I need to keep that entire maze of interconnected facts I am going to use in my head. Being me, I start foreshadowing early. You can (and I do) insert foreshadowing later, but to make feel like an organic part of the plot, it does help to weave it in very lightly from the start. You have to have reasonable idea that Chekhov’s rifle on the mantelpiece will be fired and start building reasons for it being there and being used, or it doesn’t matter that you put in the first scene. One of the few arguments I had with Eric Flint (who generally left me to write the books and editorialized them later) was where he wanted me to take out an early section of a book and put in an entirely different ‘block’ of scenes. I had so many threads of foreshadowing already running through the section that made the later parts make logical and natural sense for the characters to say and do. I do not assemble a book out of ‘blocks’ that can be interchanged easily. Other people do.

This means this bear of very little brain has a lot of his very limited processing power tied up in keeping all those threads and details straight. I have copious and chaotic notes (sometimes longer than book). I have been known (particularly with the Heirs of Alexandria series) to draw vast wall-spanning interlocking diagrams in different colors (for each thread and character). It looks like a cat got into a fight with a lady’s entire embroidery-yarn collection. Maybe it helps…

Honestly, I don’t know. I’m curious about your methods. I have found the only thing that does help is instead of following up immediately on trivia I put a # mark and continue rather than going back and searching. But really, I still end up keeping most of it in 4 dimensional outline in my head – and this is a process that needs streamlining.

Image from Pixabay No attribution required.