Last week, I wrote about how I needed to take back control of my work time and close out the noise. The complications of living during this so-called pandemic were taking a toll on my writing. Who am I kidding? They were taking a toll on my life, just as they have on everyone else. Even though I’m basically an introvert who doesn’t mind staying home, being told I can’t go somewhere chafed. Social media is filled with horror stories (from all sides of the equation). The media is telling us we’re all going to die. Hell, I even saw a story today where a zombie movie director was cited as an “expert” on the body language of protesters over the weekend. Is it any wonder I haven’t been able to get any work done?

Oh, the ideas have been there. But to say I’ve had an extreme case of popcorn kittens is putting it mildly. I’ve made notes on four different books. But that’s all. Actual words haven’t been happening, at least not in any consistent quantity, much less quality. I simply couldn’t focus long enough to make it happen.

So yesterday I decided enough was enough. Maybe it’s knowing Texas is slowly opening back up and the hope that soon life will return to some semblance of something close to normal. Maybe it was just reaching the point where I said “fuck it”. (sorry about the language) Whatever it was, I’m glad it happened. I got a solid eight hours of work in yesterday–to the point I forgot to stop and eat lunch until it was almost time to start dinner prep.

Part of it was remembering something I’d read here in the last year or so. Cedar mentioned in a post an app designed solely to help writers brainstorm and outline their work. It’s nothing new, not really. Scrivener and other programs give you the same potential. But something about what Cedar wrote stuck with me and I went looking for the program yesterday morning. I was getting desperate and was willing to try just about anything.

Unlike Scrivener and others, you can’t write your story in it. There aren’t a lot of distracting bells and whistles. What you can do is visually plot your story out, keep track of multiple storylines, add character sketches and export it all into a docx file you can then import into Scrivener if that is your preferred writing program or simply file away if you use Word or other programs.

While I’m not much of a plotter, this is exactly what I needed, especially the visual storyline tracker. Writing a series, much less several series, means I can easily drop a storyline and not realize it until too late. This lets me look at the visual or simply the “cards” and see where I am or where I need to be going.

The above is a screenshot of the timeline view of the opening of Night Magic. (I know it says Rogue Magic but that’s because I am not certain of the title yet.) The boxes don’t really tell you what the plot is. They are more cues for me. But, if you go to the outline view, you get this: 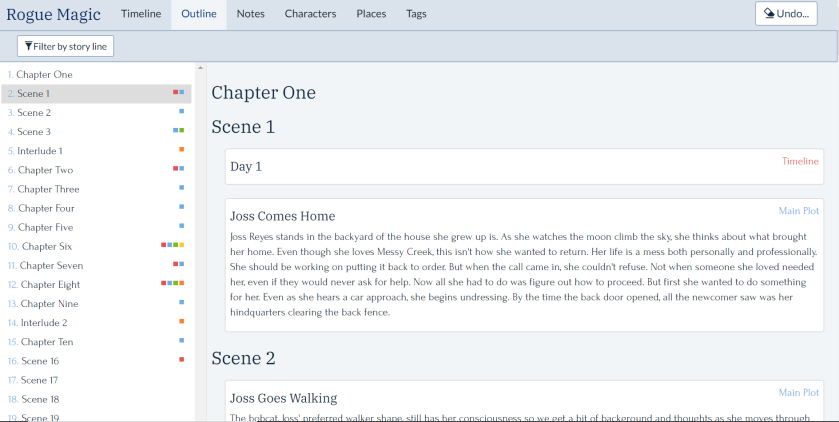 Again, it’s not detailed. It won’t even be completely accurate once I start writing. But it is enough to get me going in the right direction. The dots next to the chapter/scene headings on the left indicate which plot point is involved and where the scene falls in the timeline. That information is also indicated in the scene box on the right.

You have the same sort of interface if you use the “notes” tab–of the ones for characters or places.

You can be as brief or as detailed as you want. It is up to you.

I went ahead and, out of curiosity, paid an extra $10 to get the templates the app offers. Here’s a list of them and, let me tell you, I can see how they can help. And, yes, they are editable so you aren’t stuck to just the number of chapters listed, etc.

If you’re like me and you spend any time looking at plot structure resources, you’ll recognize at least some of the above. For an additional $10, it might be worth the investment.

Now, I’m not telling you to rush out and plunk down money on the app. Nor do I get anything if you do. What I do recommend is if you are finding it hard to focus and get your writing habit back on track you check it out. Plottr allows you to download the base program and try it out for free. It is the full program, iirc, with no restrictions.

That said, I will admit the documentation is slim to none. But the program is pretty intuitive. Also, the developer is very quick to respond, or at least he was for me yesterday. I couldn’t figure out how to export a docx file. Oh, I found the export function with no trouble. But when the dialog box came up, the only option was to export as “all files”. So I went back to the website and sent a PM to the dev. I doubt five minutes passed before he got back to me. As we talked, I figured it out. All I needed to do was add the .docx to the title name before hitting save. We both had a bit of a laugh and he assured me that wouldn’t be required with the new version he is working on. The quick response is just the sort of thing to keep me happy.

Another thing I like about the program is that you actually buy it. This isn’t a yearly license where you get dunned again in a month or a quarter or next year like so many programs and apps are going to. You pay and it’s yours. Also, it is available for Mac and PC AND there is a 30-day money back guarantee.

I will note something else and this is from Cedar. She commented that while you can use the program on an android or iOS device, it isn’t as good on them. My guess is it isn’t optimized for a smaller screen. But since I don’t tend to plot on my phone or iPad (except when using it as pen and paper) that’s fine with me.

But, for now, it helped me focus enough to not only know where the story is going but to finally get the main character to decide on her frigging name. She and Myrtle the Evil Muse thought it funny to keep changing her name. I don’t know about you, but if I’m writing a story and have to keep saying “hey you, what’s your name?” to the main character–especially if she is the POV character–it sort of throws me out of the story.

If there is a real upside to the program other than what I’ve already mentioned it is that I now have a complete character list with at least some sketchy notes for the entire series in one place. That’s huge because it means I don’t have to keep looking back at the previous entries in the series to find out who did what with (or to) whom when and why.

Now I have a book to write and for the first time in a month I’m excited to write and that means I can get back to editing (Jason, I haven’t forgotten and am about 1/3rd of the way through your book) like a “real writer”.

Featured Image by StartupStockPhotos from Pixabay