I find that writing while being interrupted constantly is impossible. It is equally impossible to write when my brain is full of fluff and nothingness, echoing back at me when I inquire of the ideas it was providing me at any other point than this one, when I sat down at a keyboard. I turn to my notebook where I could have jotted something down while I was in one of those moments of inspiration, but Lo! there are only meaningless scribbles, signifying little. I sit and stare at the screen. I write a list of bits we need for household projects. I wonder why me? Why would anyone want to read about writing from me?

But then again, if you listen to the stories the people interrupting you are really telling, then you might have something to write about. My First Reader, talking to me about longhorn-Brahma crosses, and their potential temperament. He told me a story about growing up on a dairy farm, how they had a Hereford cow who was mean (you should hear it in his slight drawl, drawing that out meeeaan!) but a gentle Brahma bull. He’d take the bull out in the pasture with him whenever he had to get in it, since Old Warteye would make a run at him (or any human. She didn’t care, she had murder in that ugly eye) but the bull wouldn’t put up with his calf (a towheaded boy) being messed with. The mental image is sweet, and amusing, with an underlying element of danger since both he and I know that if you don’t treat a half-ton of beef on the hoof with utmost respect, you can easily wind up dead. The internet jokes about cows killing more people than sharks every year sound funny but make farm kids shiver a little.

It’s all fodder for the writer brain. The stories of growing up, gaining experiences (often painfully), and having adventures (which are usually only amusing in retrospect). For a SFF writer, the most mundane things can spawn ideas that spin off to the far reaches of the galaxy. I was shopping for a desk for my First Reader. I was not inclined to walk into a store and pick one out – there’s no need to offend my frugal soul, or his, with that sort of price tag. Sure, we could afford it. But it’s more fun to bargain hunt and poke through antique malls, flea markets, or in this case, the FB marketplace. You see the weirdest cr*p listed on that, or on display in the fleas. I have to wonder what a bazaar on some distant fringe of civilization would look like. Spaceship parts? Would there still be the inevitable and ubiquitous meat grinders? Would paper books become rarities and oddities? Or would there still be booths half full of Christmas ornaments, coffee mugs, and mismatched kitchen wares? Or, as I started to write a story based on shopping for a used car… what would picking up a spaceship, cheap, look and feel like (I know, Heinlein has done it. Still.) When I car shop, I’m buying outright (we don’t do debt in our house for little things, and cars are little). I prefer to buy from owner. This has led to some… interesting encounters. Story fodder! I mean, at the time I was mostly trying to figure out how to bow out politely and rapidly. I told the two young men trying to sell me a car with the title in hand that I needed to consult with my husband, batted my eyes at them, put my hand behind me and opened my own car door before scooting out of there. When they are pressuring you, the title has a woman’s name on it, and they want to have their friend who is a notary come over to witness the title and won’t consider coming down to the bank for the notary… Oh, I don’t believe for a minute they were selling it for their aunt. I got the hell out of there.

We write what we are, what we have done. We also steal stories from everyone and everything around us. Which doesn’t stop me from trying to barricade myself into the office and stop up my ears for a little while so I can actually write down what I have, er, filched.

Cute kid tax: My First Reader, approximately 50 years ago. About the age he’d have been when lurking under the protection of a goofy gentle Brahma bull. 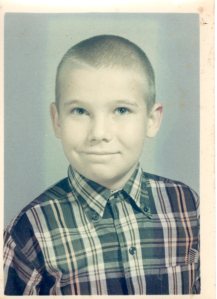 header image is cattle by Steffan Frank from Pixabay.

Oh! As an aside, since I almost forgot. Please help out the MGC. We don’t need money or anything hard, just a click and share. There are convenient buttons down there (waves in general vicinity of the bottom of the post). Thanks!