Truth is stranger than fiction, but it is because Fiction is obliged to stick to possibilities; Truth isn’t.—Pudd’nhead Wilson’s New Calendar, Mark Twain

While we were on our trip to Washington DC there was one museum my son really wanted to go see, but I had been told it was very difficult to get into, so we left it off the itinerary. It was only when I made a remark to a friend who lives there that I discovered it was no longer timed, ticketed, and waiting-room-only to see the Holocaust Museum. So, as the final stop while in the city, that was our choice. It’s difficult to describe it, so I’m not going to entirely try. Suffice it to say that in a city where we saw several museums out of the lifetime’s worth you could see, this was the one that was hushed, beautiful in design, and utterly austere in message. Humanity is capable of the divine, and the most terrible things we can see on the face of this earth and beyond. Fiction writers can try to encapsulate evil in their villains, but nothing touches reality. Nor, perhaps, should we even try. 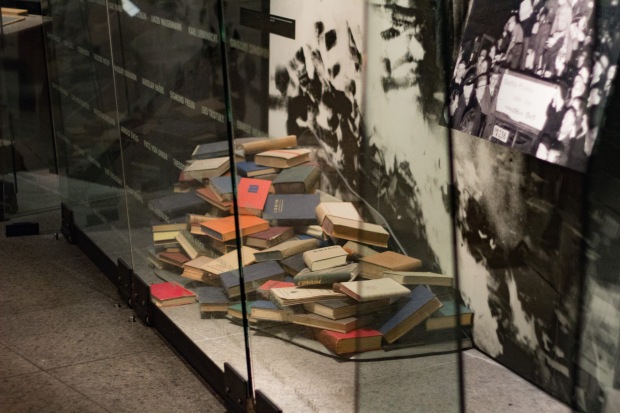 A pile of verboten books, in front of an image of burning books.

Of the many reasons to read and write historical fiction, perhaps this is paramount: we must never forget. As I wrote on my blog earlier this week, if we allow those who choose to deliberately erase history to succeed in their endeavours, we invite horrors unimagined to return into our world. Because if it is not recorded, did it really happen? Part of the reason the Holocaust Museum exists in all it’s tragic glory is that the Nazis recorded their own deeds in painful, excruciating detail. A man died this week, and in the wake of his passing, the media seeks to lionize him. They speak fictions, because there is little record of the true atrocities he inflicted on his people and those he deemed inhuman. What is not written down can be denied and will pass from the rolls of the world into the realms of legend. Few remember and can speak truth, but perhaps in their words we can find sufficient record of the reality to counteract the glossy spin job the mainstream media are giving a dead monster.

And so we come back to Twain, and a modern-day master of wordcraft, Lawdog.

“I have never wished a man dead, but I have read some obituaries with great pleasure.” –Mark Twain

Sod that quote for a game of soldiers.

You were a degenerate, fathered by a rabid cane-rat upon a syphilitic warthog; whose only genuine claim to fame is not having the common decency to catch a bullet with your face in 1975.
You took the gukurahundi, and you gave the rain blades, and hate, and fire, then you set it loose in Matebe-land. 80 000 Ndebele butchered, mostly unarmed civilians.

I hope the screams of the tortured, the wails of the dying, and the keening of the grieving families strips the flesh from your ears.

A room devoted to the shoes of the dead.

The Holocaust is by no means the only genocide our world has ever seen. There are other patches of ground where the blood soaked so deeply that the very land cries out to the heavens above for the pain of it. We are reminded, when we walk through the museum and see the small things. The mundane things we all of us take for granted. The trust that we put in those who rule over us, it can be sheared away in a moment. That, we must never forget. It’s not simply for the Jewish people who were hounded, tormented, and mercilessly killed. It’s all the other peoples who were turned on and declared inhuman, that their neighbors could justify turning a blind eye to what was being done unto them.

A measurement of the acceptable – and forbidden – hair colors, and just below this, eye colors. Institutionalized eugenics. 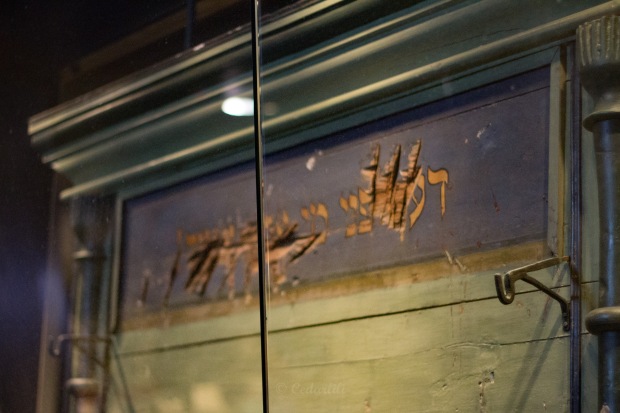 What remains of the mantle from a synagogue. You cannot convince me that the man swinging the axe did not know the power of the written word.

I’m not suggesting message fiction. I am suggesting that history should be written early, and often, and in many ways. Living history is how my son first came to his connection with the Holocaust, in books like the Boy in the Striped Pajamas, and the Book Thief. I myself remember reading Corrie Ten Boom’s Hiding Place at an early age. Both of us were drawn, with a generation between us, to seek out more information and to learn the reality behind the fiction. I let him set the pace in the museum, and stayed right at his shoulder, a step behind, in case he needed me. But I wanted him to face this on his own terms, to learn what he was ready for. At the end, just before we went out of the darkness, he was circling back around to rest his head on my shoulder for a minute, silent, just drawing from me a bit to go back and see another thing, another artifact that exists to keep history alive.

The Intelligentsia… those who can read, and write, and remember history. They become the enemy, here, to Pol Pot, to Mao, to all the crackpot dictators of the world.

A tailor’s tools of his trade, even in the ghetto. it was the smallest things that got to me: they never gave up. They kept trying to maintain a normal life, even as their world was restricted more, and more until it was too small to breathe in.