When I started thinking about writing this post I was torn between two topics: Maslow’s hierarchy of needs, and Conan the Barbarian not-the-story-but-the-movie. I’m not going to try and analyze the latter based off the former, as tempting as the ridiculousness of that is. I’m not, because I haven’t finished the movie. I was watching it as homework for a short I should be writing. I actually bought a DVD player (we had never needed one before as we don’t really consume film type media), and my dear First Reader and I cuddled on the couch (also a first, we tend to abandon the living room to the teens who take up every available square inch of flat space) and we turned on the flick. We expected cheesy, corny, all the tropes of B movies. What we didn’t expect was that about half-way through (Conan and his sidekick are about to find the temple of the two-headed snake) we’d get bored, really bored, and wander off to do something else. We’ll come back to it. It’s homework for me, after all. It’s just that, on that hierarchy of needs, it’s not even on the scale.

I could put up with the first part of the movie where the Ahnold bulks up to monster-size with no apparent source of protein or nourishment at all. I could see the whole barbarian gladiator scene. It was very slow, and awkward, but ok. The scene where he finds the magical sword? You know what I mean, when he bangs the sword that has been in a humid environment for who knows how long – although it can’t have been that long, as those skeletons were still articulated – and all the ‘rust’ falls off leaving it perfectly sharp and whole? That has to be magic. Can’t be real. And it’s odd that there, were he’d been chased by wolves, that the movie director/writer suddenly acknowledges that Conan has needs and gives him a sword. But I’m not trying to apply the comparison, because it’s a movie about a story that, well, shouldn’t have too much logic applied. The scene following… ok, let me pull back a little. We’re sitting in the living room. My son, who is 14, and not sheltered although I’ve done nothing to make him unsheltered if you know what I mean, is in the office. The office is broken off from the living room by a bookshelf, one that doesn’t have a solid backing, so you can see through the shelves past books, and over it. Anyway, we suddenly hear ‘oh my god, ew…’ and the boy sidles past with his hand up to shield his eyes while he makes a beeline for his room. I can’t blame him. That was more of the Ahnold than I was expecting to see, or wanting to. Plus, the, er, climax of that scene had me in giggles. When she turns into a demon at her critical moment… poor Conan.

In the end, I wanted sword-swinging blood and thunder and got sloow, painful character development and acutely silly sex scenes. I went into the movie with needs, and it met none of them. I love character development. I can enjoy a slow, satisfying build up with gorgeous set scenes in a movie. This one? Was missing on a cylinder or two. And not two in a balanced way. Which is fine. I’m pulling some literature off my shelves between the office and the living room to read – I have nearly a full set of H Rider Haggard and he never disappoints with campy barbaric action. I’ll finish watching Conan out of curiosity if nothing else. Is there another Conan movie that people like better?

To come back to my original thought for this post, because I’m fairly sure I’ve talked here before about Maslow, but I think it’s been a while… 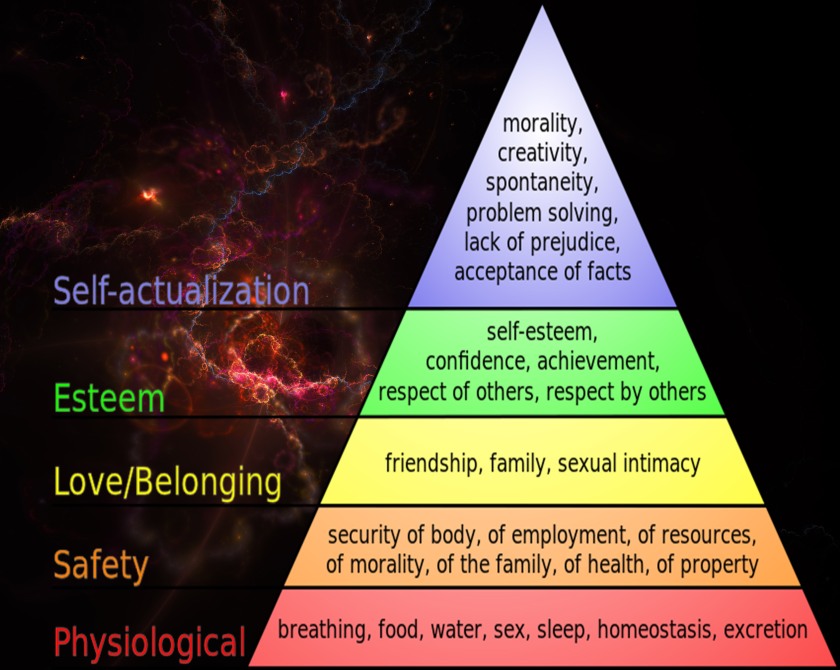 This can be useful when plotting. The more advanced your character – and civilization – the further up the pyramid of needs his concerns are going to be. Where it gets interesting is when you knock the guy who’s at the top of the pyramid down a few rungs, or all the way to the bottom. I think this is behind the popularity of post-apocalyptic fiction. We like the idea of scrapping for our very survival, those of us who have spent our lives at the top, looking back with a wistful feeling for the ‘easier’ times. Those of us who have had to live without running water, electricity, security of body, etc? We know better. But it’s a civilized man’s fantasy, to become that basic barbarian again and hack and hew to protect himself and eventually those he loves.

If I sounded like I thought that last bit was a bad thing, you’d be incorrect in your interpretation. I love that my husband, my First Reader, who would stand between me and any danger, has that protective barbaric streak. It’s sexy, for one thing, because biology and I understand why, because security. He makes me feel safe, and as a woman, my needs are driven differently than a man’s needs are. Viva la difference! If we both wanted the same things in the same intensities, we might find ourselves in conflict. But as he needs me to be safe, if we were ever knocked back down to that first rung, he would sacrifice to fill my needs before he filled his own. As I would sacrifice to fill my children’s needs before I filled my own. Fortunately, this isn’t a debate I, the writer, need to have. I can stand here in my yoga pants (with pockets!) and Marvin the Martian tee shirt writing at my standing desk using internet to convey my thoughts to a bunch of other writers out there… and you see that tippy top of the pyramid? Creativity? Yeah, what I’m doing right now is all my needs are met. I have clothes, shelter, coffee, I could go back to bed after I wrote this up, I have two bathrooms with flush toilets (you appreciate those kinds of amenities after a few years of outhouses at sixty below zero. The first year we lived in Alaska, the outhouse didn’t even have a roof). Mmm. Yeah, i’m happy. So happy, I can afford to make a few characters suffer.

So that’s my thought for the week: have you considered your character’s needs? Have you deprived them sufficiently, and further, have you shown your readers how the character reacts to the deprivation?

(header image is from Wikimedia on one of my own nebula backgrounds. It was a png and needed a little something.)