Making covers for historical books is difficult for many different reasons.  At its base is the same problem as writing history: people will rate it as wrong if it doesn’t match their preconceptions, even if their preconceptions are wrong.  (There never was, and there never will be a writer of historical anything that is besieged by people who say they’re completely wrong, just making up stuff and pig-ignorant. And most of the time those people should turn those slurs on themselves.)

In sum, the problem of historical covers as of historical novels is bridging the gap between times and cultures.  But for covers that’s only the beginning.I’ve covered probably a few dozen books, between my own and others.  And granted, most of the first books I reissued have had at least two covers (the Shakespeare books are about to.) BUT I’ve not covered books more than the musketeer mysteries.  More on that particular problem later.

What is historical fiction, in the sense of historical fantasy that needs a cover that fits the genre?

Anything from historical romance to biography to historical mystery to — even, to an extent, though even harder to signal — alternate history requires a cover that conveys several things.

While your average cover has to convey genre, feel of book, and — for a stretch goal — protagonist or milieu where it takes place, historical covers must add to that things like “time it takes place in” and “historical subgenre” (an historical romance in an alternate world is different from an historical romance in our world, for instance) and often inadvertently (and wrongly) convey “it came from Gutenberg” aka “this is an old book I picked up and formatted for re-release for a pittance.”

So the cover has to work really hard at history.  On top of which, your options for free images are limited.

But Sarah, you say, historical paintings are often out of copyright, and why can’t I use paintings for my covers.

There is in fact absolutely no reason, though you have to be careful not to include the frame in the cover/picture as that part is often what makes the painting “still in copyright.”  And you need to make absolutely sure that the painter died before… I never remember the exact date, so I make it 1920.

Oh, you should also make sure you wrote all your books in the early 20th century, are now dead and the books are in the public domain, or if not, at the very least that you’re an icon everyone in your subgenre has read.

Well, let’s look at a bestselling regency romance written and published now, shall we? 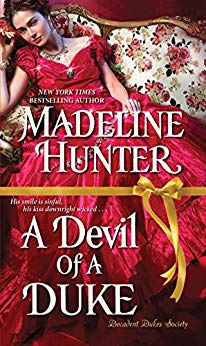 As you see the cover does its job.  It says period, it says romance, and in the size of the font it says “bestseller.”  (Also note how the font is just freely enough without being saccharine. Yep. This is a modern romance with lots of sex.  Sweet romances tend to have more flowery fonts, perhaps indicating their more traditional nature. This is why I guide myself by other people’s covers. Fonts are tricky.)

Now let’s say you took that image entirely away and put the lettering on a painting picturing the regency (or Victorian era. Our discernment on those isn’t that fine.)

To begin with, most of the paintings I can find online the painter died in the 30s, and while it’s probably fine, because I’ve seen these paintings on the cover of (multiple) “it came from Gutenberg” books, it’s a complication I don’t need.

But I finally found one.

It’s not ideal. I had one with the woman almost in the same position as in the cover, and in similar colors (salmon instead of red) but the painter was a pain in living till 1939 (which means properly speaking he’s Victorian, not Regency.)

Still, the image above is out of copyright and it indicates regency as a period.  And while she looks way too young for romance (probably not in the regency but in our time) it sort of passes.

I’m not going to do it, mostly because I’m at the wrong computer to do the lettering, but imagine that cover used in a book.  Now compare the two.  Do they convey the same message?

No. Almost without meaning to, simply because the second is an oil painting, you get the feel that it’s “intellectual” and “important” and not just set in the regency, but “old.”

I won’t go into the various ways people try to get around that. A lot of sweet romances, and a lot of Jane Austen fan fiction (A thriving genre in indie) think they get around it by having often “taken by the writer” pictures of great estates.  (Does sinal salute with head inclined and thumb and forefinger on either side of bridge of nose to stop hitting head on desk.)

The covers aren’t bad exactly just like the picture of a park bench (to give an example I saw) isn’t bad for the cover of a science fiction book.  That’s like saying, mind you, that showing up for a wedding with your underpants on your head and otherwise completely naked isn’t bad.  It’s not bad, because unless you run in very peculiar circles, it’s not even in the same universe. It’s more indicative of something deeply wrong with the person or book.  And nine times out of ten it is true.  (There are exceptions — rare — in Jane Austen fanfic, where the writer is extremely expert and has been writing for decades, and has her won fandom off Amazon, but is publishing in utter isolation and has clue zero how to cover anything.  Hence these posts.  Apparently the WMG cover workshop I took no longer exists.  Sigh.  Too bad. It was totally worth it.)

So, you say, hey Sarah, let’s do what we do otherwise and go to Pixabay for images.  It’s clear from that contemporaneously written historical romance that romance favors photography.  It’s also clear that the photo came from a stock photo site, because they cut off the face, which has become a style either because the faces are unbelievably inappropriate (apparently Eastern European ideas of “young” and “pretty” are … peculiar) or because you’re not sure of the model release (you can’t show anything identifiable without making sure the model has given permission.)

Right.  But free sites are iffy… A search on Pixabay (try it) for “regency woman” gives you silhouettes and a not-suitable drawing.

A search for Victorian woman ain’t much better.  (Though there’s some good steampunk, except without model release.)

A search for “woman long dress” unexpectedly (keep in mind I’ve done this before) yielded SOME images I could use, particularly with the head cropped off.  These are both from the same photographer:

Try this one for say “The Duke’s Gift”

Keep in mind in the later, you’d crop the head off which means to convey the feel of “sensual” and “book has sex” you’d need to make the dress red… something that works okay SOMETIMES.

And this is a relatively simple problem as, if you go to paying sites, you do find more pictures like this “not really adequate, but can be worked with.”  If all else fails you can get the picture of a bride, change the dress color and crop the head.  It’s DOABLE.

When you’re trying to cover something like the Musketeer Mysteries, your problem just became exponentially more difficult.

So, of course, for our next post on this: Covering the historical mystery.  Till then, I’m going to put a cold pack on my forehead. This desk is hard.

From: Uncategorized
← We Continue
Cracks →
15 Comments