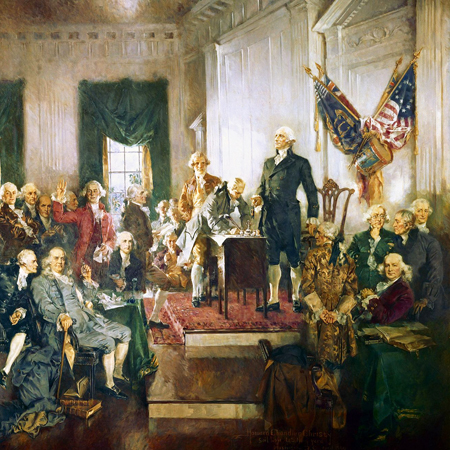 I’ve reached a point in the current book (#7 in the Applied Topology series, for those who care) where I have to stop, take a deep breath, sit back and… read all day. Or maybe all week.

No, really. I have to. I’m not just making excuses to take off, I swear! (Oy… please, people, don’t let Thalia beat me up! She doesn’t like it when I ask her to quit talking for a few days.)

Thing is that A Child of Magic has a subplot which requires my characters to visit Philadelphia for a day and a half. Um, during the Constitutional Convention. Summer of 1787, that would be. The bits that got them into this fix have already been written, and I’ve already worked out how this assignment leads right into the final confrontation of the main plot. But now it’s time for them (and me) to take a deep breath and plunge into the noise, smells, and mud of the big city.

And I don’t know nearly enough about late eighteenth-century Philadelphia yet.

“So?” I hear you saying. “Just write the story and make notes in the text about the stuff you need to look up.”

That would be lovely, if it worked, but it doesn’t: not for me.

The first problem, the way I got to this point, was that I needed to start writing this story while I was still collecting books on eighteenth-century Philadelphia, many of which weren’t available online or were significantly more expensive as e-books than as mildly battered used books. I put aside that part of the research so that I wouldn’t go crazy waiting for the used books to get here. (Libraries are not a practical option now. Maybe after the knee surgery. Right now I’d have to pay somebody to run around in the stacks for me.)

The books are here now – and so is the need for them.

The second problem and the one I want to discuss today is that to a great extent, my plotting for historical passages doesn’t precede the detailed research: it follows it. I take the evocative descriptions and interesting details I discover and use them to shape a subplot story that will benefit from what I do know without venturing too far into the treacherous ground of what I don’t know.

Of course, my own interests have a lot to do with the process. Thalia isn’t going to go into a lot of detail about the finer points of fashionable dress in 1787 because, pace Georgette Heyer, fashion bores me. Fortunately, it bores Thalia too; I am so glad I didn’t write her as somebody who cares about that stuff. I’ve already got a couple of general costume reference books that will give me enough to go on with. She’s stuck in a long dress and her shoes, having been made in a time when the same last was used for both right and left, hurt her feet. She’s got a fetching muslin cap to cover her short hair and a story about having been a fever victim to explain the unfashionably short curls should anyone notice them. That’s as much as she – and I – really care about.

On the other hand, topics that do catch my interest can lead to plot twists and interesting scenes. I have started reading Benjamin Rush and have been quite taken by the theories surrounding diagnosis and treatment of the many varieties of epidemic fevers that plagued Philadelphians in the summer months. We’re six years too early for the great yellow fever epidemic, but I can certainly have a scene of dueling physicians arguing over the bedside of a character who thinks he’s dying. (Poor Colton – I could have told him not to drink the water, back in Chapter 11, but this scene was already a gleam in my eye at that point.)

And so it goes. My characters’ peregrinations will be determined partly by overall plot requirements (gotta bring everybody back alive while precipitating the semi-crisis that leads to the final resolution) and partly by Interesting Stuff I find out.

For the actual debates, Madison’s notes provide copious detail, although I have to remember that the delegates went to great lengths to prevent those details from becoming common knowledge. Since my characters need to eat and to interact with the locals, if I can find a good contemporary description of a tavern, great; if I can’t, I’ll lean on Thalia’s reactions to the place (It stinks, but so does everywhere else; and this stuff they call hasty pudding needs salt.) Colton may have been rescued from an unsavory gaol by a charitable Quaker, because somebody needs to do it and I fancy the challenge of writing a few paragraphs of the Plain Speech as it was used at the time.

And on the second pass, I’ll delete ninety percent of the tavern discussions about the debates, because I am credibly informed by one of my beta readers that nobody else is all that fascinated by the endless nit-picky details that went into that long, hot summer of hammering out the defining document of our nation. (Sheesh. And I was only telling her about the high points. I hadn’t even written the scenes yet.)

And what else? Well… I’ll get back to you on that. Right now I’m going to put my feet up, grab a highlighter, and plunge into that lovely, lovely stack of books on the shelf and the virtual stack on my Kindle.  Rebels and Gentlemen, Bring out Your Dead, Miracle at Philadelphia, Alexander Graydon’s memoirs, Elizabeth Drinker’s diary, The Grand Convention, Life and Times in Colonial Philadelphia… Where to begin?

(Featured image: cropped from Howard Chandler Christy, Scene at the Signing of the Constitution of the United States.)