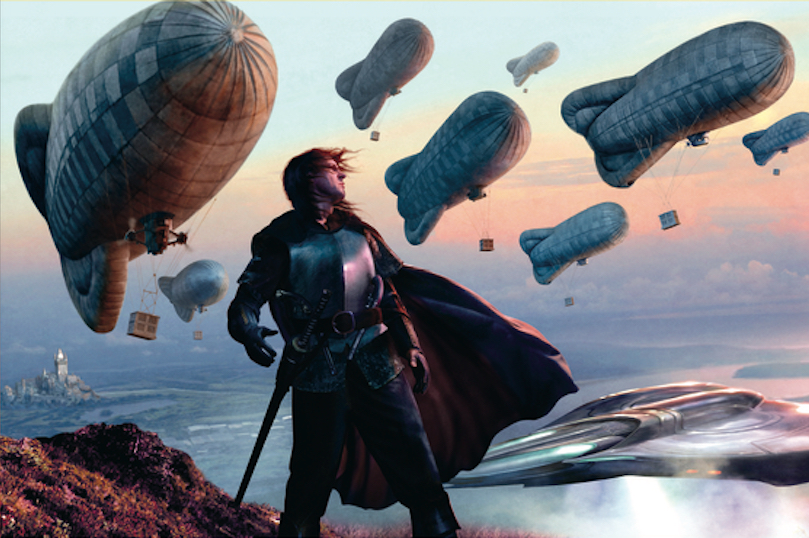 David Weber has been busy over the last year.  A new Honor Harrington novel “Uncompromising Honor” and a new Safehold novel “Through Fiery Trials.”  This, from the man who said he was slowing down to 500,000 words per year.

Go ahead, take a moment to consider the implications of that-  it’s on par with the famous story of a Blackbird Reconnaissance Jet who called the tower at LAX asking for permission to go to 60,000 feet. Now mindyou, most flights cruise between 30 and 42,000 feet.  “And how are you gonna get up to 60,000 feet?” The tower asked.  “Tower, who said anything about going up?  I’m coming down to 60,000 feet.”  It is a testament to the man’s ability as a storyteller with the decades of experience which he possesses that he is descending down to that point.  May we all aspire to be so capable.

I’ve read both books- they’re extremely different in setting and narrative, part of what makes Weber so impressive as a writer.  My first encounter with his work was as a freshman in high school (circa 2001) when I read “On Basilisk Station.”  14 year-old me loved that book, and as an adult who’s been on combat deployment, I appreciate even more how correctly Weber grasps so much of military lifestyle.

I take it as a special treat, nay a treasure, to find civilians who can so accurately write such work.  It is not a prerequisite that all who tell stories about life under arms must do as David Drake, or John Ringo and give their youth in service to their nation.  Often, it is necessary, otherwise critical mental connections and attitudes about the reality of armed service are not made. David, though a civilian, has done an incredible job at maintaining the realism and feel throughout his works, which is part of why I enjoy them.

Uncompromising Honor (hereafter UH) continues the story of the Honor Harrington’s fight against Solarian oppression and the unelected bureaucrats who run the Solarian League.  I enjoyed reading it, right up until Honor lost everything she cared about and went on a wild mission of vengeance to the Sol System- where she decided that destroying every single bit of the Orbitals over Old Earth was absolutely and utterly necessary, just because the antagonists had been doing it too.  At which point I put the book back on the shelf and walked away.

Ostensibly, this was to calm down.  Part of it is also that I think best when I’m up and moving- how does he get so much right, but screw this major plot point up?  Answer: nobody bats a thousand.  And in some way, he needs to show Honor Harrington’s flaws.  She compromised herself when she chose to mindlessly destroy civilian targets like she did.

This truly was, in my opinion, a character sinking to the level of their enemies, before we even get to the second and third level ramifications of crippling and maiming a fellow nation-state’s economy.  I would not, as an NCO have supported any officer over me who gave such orders.  There is a time and place for reprisal (which is a legal tool of enforcement for commanders in the field to use), to be sure.  This was not it.  To my mind and mode of thinking, her actions go against everything which I stand for, and to which I have sworn my oaths of service.  The Laws of War are real, they exist for sound reasons, and to violate them is a vile thing.  We see classic irony in the title, when compared to the character- she compromised herself and what she stands for, in the pursuit of petty vengeance.

In stark, and brilliant contrast to this, we have the newest novel from the Safehold series: “Through Fiery Trials.”  When last we saw Safehold, the mad Grand Inquisitor had been executed for his crimes after finally learning the truth of the power-hungry order he had given his life in service to.  It was poignant to see his deathbed confession, followed by his death.  Farewell to the creature.

TFT picks up shortly thereafter, as the Charisians and the Inner Circle struggle to grasp changes which have come to their world, both technological and economical.  Compared to the other entries in the series, there is far less combat, far more intrigue, far more economic warfare, and far more exploration about the rights of kings, the rights of the governed and where the two meet.

TFT also introduces new characters to the series, as well as a shift out of what we may consider to be the Older Generation.  Gone is Lewis Thirsk, the Dohlaran Admiral who held his nation together and brought the Church of Safehold it’s only victories.  Now we see his grandson (iirc) come into the light, not simply to fill the pages, but to drive the plot forward with a new wrinkle- as Consort of the Crown Princess, essentially uniting the two kingdoms with their marriage.  Nimue Alban the female PICA (as opposed to the male, Merlin) finally marries, for love.  These two characters in particular can be seen as re-imaginations of the twins Colin and Harriet from Weber’s previous series- Dahak, produced from the same original data (a stand in for Jiltanith MacIntyre), but so very different in personality.

Several other new characters are introduced, even as Charis prepares  for the possibility of the Archangels’ prophesied return to Safehold.  We see the Army of God, full of Harchongian soldiery slowly morphing into a new nation, one full of self-determination and driven forward by Earl Rainbow Waters’ desire to not see his men’s lives wasted.  The full impact of the newer gunpowder weapons is driven home as his men slough off the centuries of oppression their culture has been locked in.

Weber handles all of this brilliantly.  He also earns major credit from me for his profligate use of artillery throughout the Safehold novels.  I love mortars, and howitzers, and while I haven’t gotten to fire rockets yet I’m pretty sure I’ll love those too.  When the Harchongian army comes looking for trouble against a rebellious valley in TFT, they’re introduced to the joy of mortars, and instructors from Ruhsyl Thairis School of Artillery.

I did not bother wasting time once I had the book in my possession.  It was read immediately and in full, with minimal pauses.  Local PD does not like impaired driving, and I like not having to pay that ticket.  Lack of sleep is easily countered by irregular, unsound caffeine use.  Well-written, clear, and full of an engaging storyline that did not disappoint.

I’ll probably re-read the entire series starting next month when I’m on spring break mid-semester.  I thoroughly enjoyed TFT, with a minor exception- I wanted to read more about Merlin exploring the Church of Safehold’s underground lair.  Weber has hinted at it enough over the last 9 MOTHA-FRACKING BOOKS.  If it’s so important that they (our band of brave protagonists) get in there, why the hell haven’t they done so already?  Right now I feel like the crowd in Monty Python and the Holy Grail screaming “GET ON WITH IT!”

Whatever disagreements I have about the work aside, Weber’s determination to provide quality writing, quality stories, and in such wonderful density remain as hallmarks of his.  The only way my 2019 could get better with regards to his work would be a publishing date for the 5th Empire of Man novel (with John Ringo).  I need more Dogzard in my life.