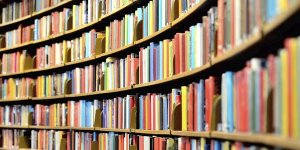 So you decide you want to create a new world for your characters to play in, or you get the wild idea—after one too many children’s dinosaur books read at bedtime—to write a story where the dinosaurs didn’t get offed by [insert disaster here]. Or a world where reptiles rule. Or whatever.

You can just start writing whatever pops into mind and hope for the best. Or you can do some research. Me being me, I research. But where do you start?

I was taught to use a funnel approach. Find the most general, broad things on the topic that are readily available, or that can be easily obtained (bought, checked out from library). For Merchant and Magic, since I already had an OK knowledge of where I wanted to set the story, I began looking for general books about the North Sea and trade in that area. If I needed to start even more basic, I’d have hunted for general histories of Medieval Europe, in order to get a sense of chronology and where things were happening. That also gave me a better idea of when, or at least what sort of technology level and political options might work.

While in the general books and magazines (and web-sites), I look at their bibliographies and footnotes. You can probably rule out primary source documents, as I did, since going to, oh, the Bodleian Library in England to read about crown policies on trade wasn’t really something I could do. But I did find some research paper collections that I ended up checking out via inter-library loan. They told me about the religious confraternities Hansa traders belonged to, and the rules of the trading-posts for their members (no strange women, all bills must be paid on time, so on), and that a number of Hansa cities had paved streets because it was prestigious. These are details that really helped firm-up what I wanted the world to “look like.”

Economic histories told me about trade, sometimes in far more detail than I wanted—So. Much. Codfish.—and much more than readers wanted. But things like “just price” and what fell under it were very, very important until the modern era, and were debated with great heat and vigor. The hazards of the road and sea, and what sort of loads could be carried, what the most valuable goods were, who in general bought what… Sifting out those bits from the dull dross took time but again, were vital to my world. The main character is a businessman who swims in that kind of thing. He’s not going to notice the water, but the writer had better pay attention, or readers will notice holes.

Another source that is becoming more available are archaeological reports. Where written sources do not exist, artifacts and other physical evidence can be useful. That’s how I learned about the paved streets in Hansa cities, and about the organization of a kontor and the wares-houses. Other things as well, such as how often various bits of cities and towns burned down but didn’t make the available written records. (Pretty dang often, apparently, depending on where and when.)

As I read, I took notes, including on how I might use this bit and that. These are not as detailed and precise as my academic research notes, but they are categorized and tabbed so that I could/can go through them quickly and make certain I recall things correctly, and get them right the second or third time I use that bit. (I also knew I was going to have a sort of bibliography, so that was another reason for a list).

But you are doing sci-fi, not history-based fantasy! Then I highly, highly recommend some of the Writers’ Digest how-to world-building books. If you need simple planetary mechanics, a thumbnail guide to where the masters went awry on alien biology, and so on, and examples to track down and read, those are worth their price. Plus many libraries have copies. Also read about geology, about the odder corners of biology (see Dave Freer’s piece on sea creatures and reproduction in this blog for some really “oh good grief, that’s totally bizarre!” ideas), and different science things that apply to your world as you come across them. If you are going to write about a super volcano, say, keep chronology in mind or you may have some people walling the book because it goes from “Quiet, unassuming, unsuspected” to “Dude, where’s my continent?” in two weeks or so without giving a reason. I’d skip the volcano and do the New Madrid fault or the one under NYC, personally, but that’s just me. The point is still start broad and then narrow your focus. Planetary systems, then what your world’s atmosphere might be like, then what kinds of life would work in that system, and so on.

That may be too broad, but the point is, start with a large net, then narrow down. If you don’t have a larger context, a monograph on medieval metallurgy of non-ferrous ores is going to be useless. If you do have context, that paper on experimental super-small nuclear power plant designs may be just what you needed.

And you can talk to people. I tend not to, because I’m an introvert and I really like book research better than trying to arrange conversations with other historians and experts. That said, people have had luck contacting academic authors and getting info. MomRed saw a paper that looked intriguing that was in a bibliography. She found the author and e-mailed him, explained that she was interested in the history of the area and had read this, that, and this other thing, had seen the reference, and wondered how she could obtain a copy? He replied and directed her to a conference paper collection, recommending that she ILL it if possible due to her limited interests and the cost. MomRed thanked him for his assistance and did as recommended. The worst that can happen is the person can say no.**

So, after a year of intermittent reading and mulling over, assisted by some ground truthing and museum visits*, I had details, I had a good idea of how medieval trade worked, and what went where, or didn’t.

Now, how to get them into the story without turning this into the world’s longest, “As you know, Bob…”

*I was amazing fortunate that in Germany and Belgium, there are museums dedicated to trade and business history of the Hansa, and that I was in a position to visit them, and can read the languages. Photo books, museum catalogues, and similar things can fill in at times, so you get an idea of what things and places looked like.

**Be warned, some university e-mail systems auto-spam anything from AOL, Hotmail, and a few other services.