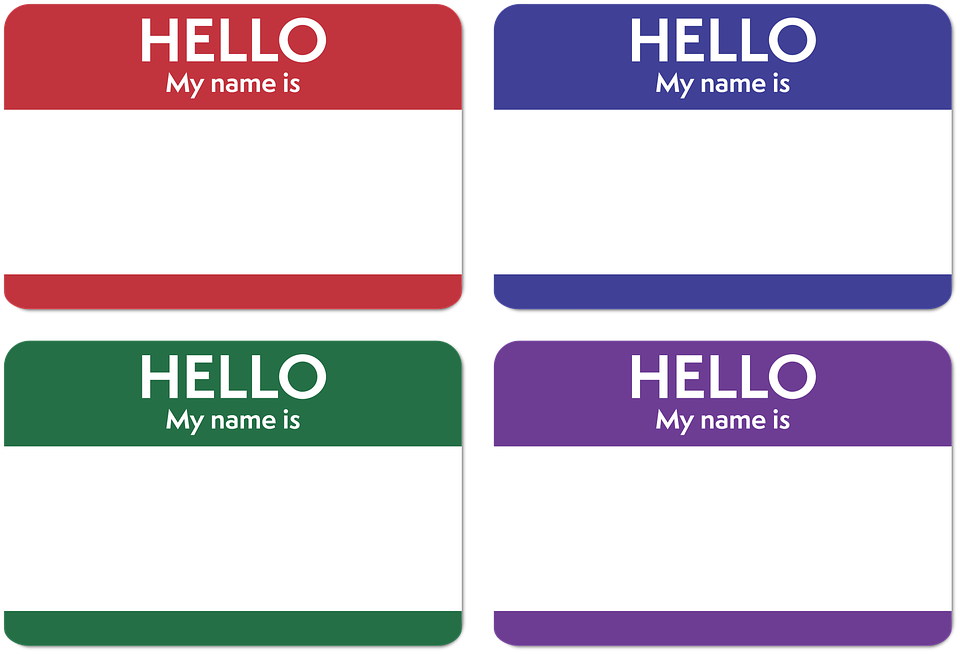 I’m (somewhat reluctantly) working on a story in a new universe. Ground dwelling fairies are fighting with tree dwelling fairies and won’t tell me why. Why must these things pop into my head when I have the least amount of time or energy to deal with them?

But if I could answer that question, I’d be rich, and I wouldn’t mind having nine thousand projects all pop up at once, because I could take my time in sorting them out.

Ahem. Never mind. The point is that a new writing universe requires new characters and places, and that brings us to naming conventions.

Like every other aspect of writing, the point of naming is to communicate information to the reader as clearly as possible. And while it’s possible to slip character information into a story in other ways, naming is a useful tool. TV Tropes has a zillion pages devoted to this; the page for Awesome McCoolname is one of my favorites, simply for the laughs.

It’s a peculiar hang-up of mine that a name should generally indicate the character’s gender (Hm, I wonder why?), or at the very least, it shouldn’t contra-indicate gender. If you’re going to name a boy Marie, you’d better have a good reason for it, like, he’s a French aristocrat from the 1700s, when that was a common first name for boys, who would then have a long string of masculine middle names to make up for it. The man in question would have been called by his title (by strangers, hangers-on, or casual acquaintances) or by a nickname (by family and close friends).

Names are also good for relaying to readers a character’s ancestry, occupation, or other odd details, particularly in fantasy writing, where no one bats an eyelash at characters called Gwydion the Lame or Barthold of Kingstown. It’s possible to convey that information to a reader through other means, but why discard a writing tool if it can be useful to you and doesn’t interrupt the flow of the story?

Occupation-based last names can be used for subliminal signaling. Think about it- if you have a character called John Smith and one called John Lancaster, who’s the working man? Most people would guess that John Smith is the working class character, even if that’s not the case. In fantasy or historical fiction, John Smith is probably a metal-worker of some kind. If he’s not, you might consider explaining why not, depending on your setting, because hereditary last names go in and out of style throughout history and didn’t become common in England until the 1300s.

A canny writer can use appropriate last names to their advantage. They can also mislead for comic effect, as in the case of Robin Hood’s sidekick John Little, who is most certainly not. First names are good for this, too, like naming an ultra-masculine guy ‘Tiffany’. It’s been done in real life, but because it’s uncommon, it can tap on the funny bone of your readers.

Naming patterns can also be used to evoke a particular cultural image. The Garians in A Kingdom of Glass are a horse-focused steppe culture and have mostly Eastern European names. It gives them an exotic feel, whereas the more conventional Morlanders have mostly French and English names. Sándor Rákoszi can live in a yurt; George Foix cannot.

Patronymics are also good for this, because readers are used to seeing particular constructions associated with different cultures. Patronymics are many and varied. The easiest construction is ‘Character, son of Name’, and because it’s fairly generic, you don’t have to worry that you’re accidentally signaling a particular culture. ‘Character Namesson’ looks Northern European/Viking and is still used in Iceland. ‘Character mac (or mhíc) Name’ is Irish and so is ‘Femalecharacter ní Name’- MacName, McName, and O’Name are hereditary last names, not a patronymics. Russian patronymics could take up an entire post of their own, and of course, there are patronymics associated with modern and non-European cultures. A common modern construction is to give the child its own name and use parents’ or grandparents’ names as middle names.

Let’s talk word order. The Western World has a long established tradition of using ‘Personalname Familyname’ to identify a person, but some Asian languages use ‘Familyname Personalname’. So does Hungarian; it’s a holdover from historical invasions from the east. It’s not overly surprising that Western culture is much more focused on the individual and that individual’s actions, whereas Koreans, for example, put more emphasis on the family’s reputation and the importance of belonging to a particular clan or tribe. Writers can use this to their advantage, by subtly showing that the fantasy or science fiction culture is extremely family- or individually-oriented. (For most of us, this works best if you want to use ‘Familyname Personalname’ to show that the culture is family-oriented, because most of our readers don’t even notice ‘Personalname Familyname’, it’s so familiar to us.)

Some real-life cultures don’t even use personal names, and you, the writer, can follow their example if you like, to show a character’s relationship to family or what that family values. Ancient Romans didn’t give their girls personal names; they were known by their family names among strangers and their nicknames among family and close friends. And we, two thousand years later, have girl’s names like Julia, Claudia, and Camilla, because of it.

Sometimes, the universe requires you, the writer, to make up your own character names. (Hello, science fiction writers of the audience!) If you’re going to do this, try to follow a pattern and make them recognizable as names. If the reader is reading along and has to stop to figure out what Nalwnrgk’a means and if that word is meant to indicate a character, you’ve lost the reader and that’s a Very Bad Thing. Ignore this is you’re writing historical fiction or trying to evoke a particular culture, both of which have their own naming conventions that you ignore to your peril. Very few readers will tolerate characters named David Evans or Mary Anne Reilly in a book about ancient China.

Some caveats: give a character a name that suits them. Some characters will jump up and demand to be called by a particular name, and who are we to argue? Most of my characters aren’t quite so insistent; I tend to get a vague image of them in my head, along with a basic understanding of their role in the story, then hit baby name websites for suggestions. Though I will say that the first two fairy characters in the new universe didn’t require that; they showed up already named Mara and Ailil. I’m not arguing with a couple of foot-high fairies. They’d probably kick me in the shins or start gnawing on my ankles.

Another caveat: Naming conventions are just that, conventions. The Name Police are not going to string you up by your toenails if you don’t follow them exactly, and with the advent of indie, it’s possible to find an audience for anything, even if the characters are oddly named. Most readers are used to seeing the above conventions but a fresh, new method can also be attractive.

What naming conventions do you use in your works? Which ones cause you to throw a book against the wall?

74 thoughts on “Fluffy the Terrible, and Other Appellations”