*You guys know we talked about doing a shared world.  We went with a whole continent so that Dave can have his jungle and I can have my big city with diners.  We’re working on a contract which we should have in a week or two (and yes, we’ll post it for your enlightenment although we haven’t decided yet if anyone not in the group can play.  OTOH if it’s very successful, we’ll inevitably enlarge it.  For now, here’s the second chapter of Elf Blood, book one of Risen Atlantis. And for now it is ©Sarah A. Hoyt 2013.  All rights reserved.  Do not copy, distribute or otherwise disseminate without the author’s name, and a link to this page.  You do not have the right to alter it.  You do not have the right to claim it as yours. For permission to do anything other than quote it for review or recommendation purposes, email Goldportpress@gmail.com. This is a work of fiction, all coincidence between it and real people place or events is assuredly imaginary.* 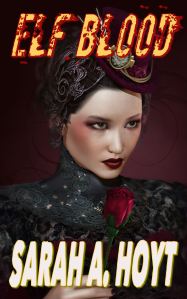 “Murdered?” I asked.  I looked at the beautiful face, the shining blond hair, impeccably cut suit, and I wondered how someone like that, whose very appearance bespoke carefully ordered life and wealth, could be in danger.  I narrowed my eyes at his pointy ears, and lifted an eyebrow.  “The devil takes the hindmost?”

He let his mouth drop open.  For just a second it looked like he was going to deny that his people practiced the particular form of elvish ritual that included human sacrifice of a ceremonial king.  Then he bit his lower lip, probably having realized that with who I was and what I was – and of course, he would know, even if my ears were not pointy.  I understand elves can see magical power – he couldn’t tell me the stories my father’s people told humans: that it was all a long time ago, that it was just tales, that these people kept dying in accidents after getting involved with elves out of the merest coincidence.

Or rather, he realized that he could tell it all day long, but I wouldn’t listen.

Something like a a tide of red appeared on his cheeks.  It made him look feverish.  He closed his mouth with a snap and more or less threw himself down on the red leather chair.  His hands clutched his hat in nervous force and probably ruined the brim.

I had just thought that other than giving offense my question was foolish.  Devil takes the hindmost, the seven-year-sacrifice of the ceremonial king, to spare the real sovereign and prolong his life, was always done with a human drawn in to the circle of elves, usually by a love affair, and sacrificed at the appointed time.  If you were very good, you might last two or three seven year cycles, while the less favored ones went first.  But ultimately your role was sacrifice.  I remembered mom and set my jaw.  I really didn’t want anything to do with elves.

But the point was that no elf ever got drawn in and murdered.  That was not how it was done.  The whole point was to protect elves, not to sacrifice them.  The king and queen of each hill were perhaps more important than the other elves, but at the glacial rate elves reproduced and as bad as they were at surviving their early years, ever elf was considered precious by their breed.  Or at least by their hill.  Not loved, necessarily – elves were not good on the love thing – but protected and taken care of.

He twirled the brim of his hat in his hands, like a boy playing with an imaginary steering wheel and taking a sharp turn.  “That is, it shouldn’t–  You see, that is why no one will pay attention to me, even if I go to the police, but things are being so arranged… With solstice approaching.”

Unfortunately, he’d caught my attention.  Solstice was the normal time for the sacrifice of the ceremonial king and queen.  It was less than two weeks away.  But what the devil could it mean that an elf – I looked at those pointy ears again – could be in danger of being sacrificed?

City elves are different.  My father’s people call them Un’uruh, which means some variety of unclean, but more like “tainted” or “mixed.”  I suppose a good number of them are mixed at that.  For one, it is said – though of course, no one can know for sure, since it is considered impolite to doubt anyone’s creation myths no matter how silly – that when Atlantis sank, half the elves stayed on.  They just built magic bubbles under the sea, and went on living there, leading perfectly normal lives.  Some changed themselves into mermaids, whom my father’s people consider just as Un’uruh.  That’s proven fact.  What is not proven is that some pure, untouched elves remained in Atlantis and that those are the ones we call Wood Elves or Forest Elves.

Maybe it’s true.  They are made of different stuff and tend to look Greek.  The city elves are often blond and blue eyed, and freely admit they’re descended from the ones who left with the humans as Atlantis was sinking.  They usually talk about their centuries in Ireland, in England, in Germany, living among humans, disguised as humans.

My father’s people say that they went and mingled their blood with humans, and made themselves all or part human and that their lifespans are shorter and that this is why they can stand to mix with mortals and carry on business.  The fact that their business is usually predatory and that they’re considered worse than mob factions by the police is ignored by my father’s people.

But I’d never heard, not even in my time in the city, not even from my father’s people – who cheerfully considered me Un’uruh too – not even from their worst enemies that city elves sacrificed their own.  Not even in the grand every seven year sacrifice.

My would-be client twirled his hat.  His eyes showed an almost blank fear.  They were the eyes of a wild creature run off its legs by a pack of werewolves, until it still wants to live but it knows it will die.

“Are you serious,” I said.  It wasn’t quite a question.

His hands shifted, turning the hat 90 degrees.  Light glistened on a wedding ring on his finger.  Some polished grey stone.  Probably hematite. Elves cannot stand metal, not over a long time.  It doesn’t kill them, but it gives them a rash.  But the ring was on the wedding finger, so a wedding ring.

As I said, it was unfortunate that I was interested, but I was.  For one, if – as seemed likely right now – my attempt at getting away failed, it wouldn’t hurt for me to know more of what went on among elves.  I mean, really went on, beyond what everyone knew and the lies my father and his people had told me.  Of course, it was possible that I was too Un’Uruh for even city elves, but maybe not.  Maybe I could move in among them, and maybe they’d accept me despite my somewhat rounded years.  Well, round enough to pass.  They wouldn’t treat me as one of them, but then neither did the humans, and just sorta being one was enough to make me feel completely welcome, I thought, compared to how I’d grown up.

I’d never heard of elves sacrificing their own, or even considering it.  The departure from tradition gave me a glimmer of hope.  I put the pen down on the paper and said, “Your name?”

“Of course not.”  I wanted to say “don’t be stupid,” but I didn’t.  The time might come, in this investigation, when I needed his true name for a casting or a protective measure, but expecting an elf to give you his true name first thing out is like expecting someone else to give you a lot of hair or a drop of blood.

He seemed to realize what I almost added, the words that hung unsaid between us, because his lips quirked up on the left, an almost human ironical smile and he said, “No.”  Then he straightened up.  “You’ll take the case then?”

“I’ll consider it, at least.  What exactly do you expect me to do?”

“Prevent my being… Don’t let me be killed.”

“That’s more of a magical bodyguard you need,” I said, and hesitated.  I wanted to find out where this went, but I didn’t want to mislead a client.  Even this client.  “I can protect, of course, but not against full elves.”

“No, no,” he said.  “I understand.  That’s not what I meant.  I’m sorry.”  He pulled his handkerchief from his pocket.  Kelly green.  I repressed the urge to snarl “how precious.”  He tapped his forehead, which must be a human-learned gesture, since elves rarely sweated enough to justify that.  He looked back up at me.  “I’m all to pieces.  My nerves are shot.  The feeling has been growing…  I want you to find out how I’m to be exec—killed, and who will do it.  After that I’ll handle it.”

“I’ll handle it” was elf for “I’ll kill the bastard before he can kill me.”

But the idea baffled me.  “You mean you don’t know?”

He shook his head.  “There’s no way of knowing, of course.”

“Of course,” he said.  “The year’s executioner and executed are never known.  I just got… that is, there was a seeing and other… other reasons. My fear is that the executioner is my wife.”