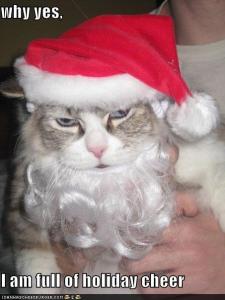 So, another Thursday approacheth, and Kate sitteth upon her well-padded cushion to compose another scintillating Mad Genius Club post. Only… Kate sayeth unto herself “What now?” Or words to that effect.

I actually had a post planned out and even pre-written, and then Rowena beat me to it. Meanwhile my brain is somewhere in the Caribbean partying, and it doesn’t even send a postcard. I’m horribly offended.

The fact is, it’s been a hellish year for me, and I can’t wait for it to be over. I’ve got one more workday this year (today), then a smidge over a week to recover for next year’s fun and games. Getting to the end of the work year has been something of a death march – a long, painful drag with no apparent end most of the time.

I swear, if I did to a character what’s landed on me this year, I’d have people telling me there’s no way all that crap happens to anyone all at once. Besides, the character 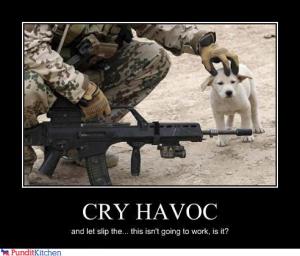 So, instead of a sensible, thoughtful kind of post, you’ve got a bunch of more or less aimless rambling, some cute and funny (at least, I think they’re funny), and a challenge:

Go to the Random Plot Generator, pick one or more of the options in the list, and write a short summary of a story that uses it.

Advice for the Evil Overlord:
The gun turrets on my fortress will not rotate enough so that they may direct fire inward or at each other.