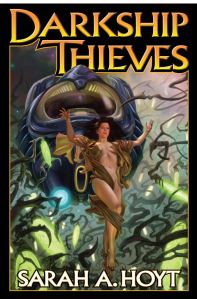 So you want to write short stories. Or you don’t. Couldn’t care less. It is my considered opinion – and as everyone here knows I am a moderate and ponderous sort of person, mild-mannered and calm – that all of you need to write a lot more short stories, so you can submit it and get over this namby pamby fear of submitting your work. Because I can’t be having with that and I don’t want to call y’all sissies. (Even if you are.)
What I most often hear is “But I don’t like writing short stories.” Or perhaps “I’m a natural novelist.” Or yet “I don’t have short story ideas!”
The fact I normally hear these pronounced in the tone my kids used for “but I want a cookie” normally means I roll my eyes and go hide somewhere with a book. But leaving aside my excellent parenting skills, my general answer to these is “cry me a river” for the first two and “You can learn” to the last. I too am a natural novelist, I don’t generally like writing short stories, and heaven knows I don’t even have SINGLE NOVEL ideas, but more like a six book series.
You see, there are reasons to learn short stories – beyond the fact that you need desensitizing. Once you’ve made it and you’re a big name (shut up. The alternative is I keep kicking you. ALL of you will become major names by default) people will ask you for short stories and short stories are your cheapest means of self promotion. Write short stories for as many anthos and mags as you can – chances are people will find them and then look for everything else you wrote. At least if you do a creditable job. So… about learning to do that job.
Ideas are the easy part. I have a friend who routinely tells me “I have this idea for a short story” – when in fact he doesn’t. What do I mean by that? His “idea” will be something like “What if squirrels discovered electricity?” That is not an idea. It is the rawest glimmering of what-if. And it’s certainly not a Short story idea. Maybe an essay.
Could it be a short story idea? Sure. Follow that life line. So, squirrels discover electricity. Do they discover how to create electricity or how to steal it from homeowners, with tiny wires so they can watch squirrel porn on their tiny laptops? Let’s say they steal it. We have Mary. She lives downtown and suddenly her energy bill skyrockets. The landlord/energy company doesn’t believe her. A quick investigation finds that squirrels have found some discarded computer parts, assembled them, and are stealing electricity to watch Nutkin does Norway. Mary solves the problem by teaching the squirrels to distribute their electricity theft. She perhaps furnishes them with bigger screens, or something. In return they do something else for her – perhaps fill one of the electricity company’s trucks full of nuts. Or take nude pictures of the landlord and paste them all over the neighborhood.
Now what you must resist is the impulse to figure out how this will affect university at large. Will Mary’s boyfriend who is a biologist want to study these newly sentient squirrels? Will the squirrels become partners with humans in space exploration? Will there eventually be a tiny twitch of the tail for squirreldom, a giant step for the species of Earth? No. Don’t go there. Drop it. I mean you, Chris. You don’t know where it’s been, and besides you’re borrowing trouble. Short stories by definition take a smaller slice of the pie, usually concentrated on one person’s problem and its more or less reasonable solution. Yes, there are a few short stories with a cast of thousands and dancing elephants, but they’re rare, far between and require consummate skill.
I will confess part of this is weighing “what is a short story idea” and part of it is habit and practice – like everything else.
So, grab a couple of short story anthos (the Greenberg themed anthos are actually pretty good for this) and read a couple of short stories, it might help.
In any case, shoot me a few ideas in the comments. I’ll weigh in, as will the bunch that hangs out here, and we’ll discuss whether they’re short story ideas or not. If it makes you feel better shoot ideas you never plan to use, just so we can argue if they’re short story ideas of not. Just post them, we’ll discuss them, and your understanding will improve. (Grasshopper!) Of course, you might also want to tell me how insane my squirrel idea is. 😉 Or your alternate ideas for Squirrels Discover Electricity. (Ah, like any of you is as brilliant as I am. Whole cities are powered by my shining intellect. In fact squirrels would probably steal me… er… um… WHAT is in those cold meds?)
I know you have questions: So, you have this idea, but is it YOUR idea to write? What is a satisfying end for a a short story, versus a satisfying end for a novel? And where the 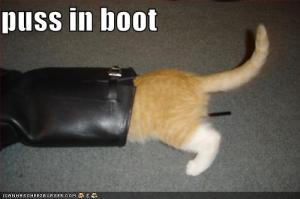 heck do you find all these ideas, anyway? Will you give me the address in Kansas where they send you ideas if you send them a SASE?
All this and more will be answered when you tune in to the next episode of “Boots, Stories and tired writers!”