I see that the local semi-feral peacock flock has added four chicks to its number this year. Probably more, but these are the hens that hang out around my house on a regular basis.

Some of the peacocks have slightly distinguishing markings, as my

neighbor started his flock with what I’ve always thought of as “peacocks” (and have since been informed that they’re “India Blues”) then added a few unusual types–black (spectacular) and white (shows the dirt). Add a few generations of random breeding and one can still spot an occasional white feather, or specs of black invading the standard speckled areas as you can see from my old horse’s buddy there.

This observation is useful in writing, because your main characters need to stand out from the flock.

Sometimes not immediately, but as they rise to the challenge they become something more.

Some of my characters shine physically, but all of them are smart, unlike peacocks who are dumber than chickens. No really. I’ve never had to tape plastic across the bottoms of my windows to keep the idiot roosters from violently assaulting their reflections.

In my main series, my POV characters started out as a mixed bag. Genetically engineered to be smarter, faster, taller, better looking . . . But they were the floor models. The proof of concept that had prospective parents thinking about fixing a few genetic problems, and while they were at it, maybe taller, smarter . . . or the perpetual Girl Gymnast body type . . . or with purple hair.

But the POV characters had had everything added to a framework that passed the legal definition of a lab animal. No matter what they looked like, they weren’t really human. They stood out from the flock in a very negative way, and the first book in that series is how they escaped.

Series? It really depends on how you define “series.” I don’t have an over-arching problem that never seems to get resolved in less that eight books. In fact, while some make a lot better sense when read in order, most problems get solved in one or two books.

I jump to new characters, regularly. And invent new Evil Empires to destroy–did I mention that instead of spaceships I went with dimensional portals?

Yes, now instead of trying to explain FTL, my characters just step through a dimensional gate and straight into trouble without having to buy a ticket off the planet. Yes, gates are a logistical nightmare for an invading force, which fact get used on occasion.

And I try for a variety of problems to throw at my characters. Problems shouldn’t all look the same, either. An occasional serious change up (or down) keeps the series fresh.

“Hey, Ice! In this book you get to meet your girlfriend’s four older brothers! Better be at the top of your game for this one, Buddy.”

All right, the brothers weren’t the main story problem, which was politics, which would have been a bit boring, if not for the assassins, the backpack nuke, and the big running gunfight with Cyborg soldiers and their Mentalist masters . . .

I enjoy writing my books. I suspect it shows, as it well should. I mean, what would be the point of writing, otherwise?

And if I pull my heroes and heroines way beyond the flock’s average, well, what do you expect of the people tasked with saving the Multiverse?

If I’ve intrigued you . . . well, if you’re a completist and want to start at the beginning: 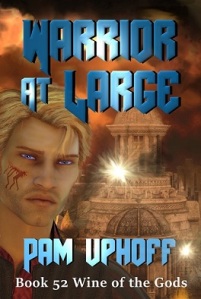 Or if you want to dive in cold and hear about the Four Big Brothers, that’s this one.

Yes, it says fifty-two. I don’t believe it either.

20 thoughts on “The Real World and Fiction”