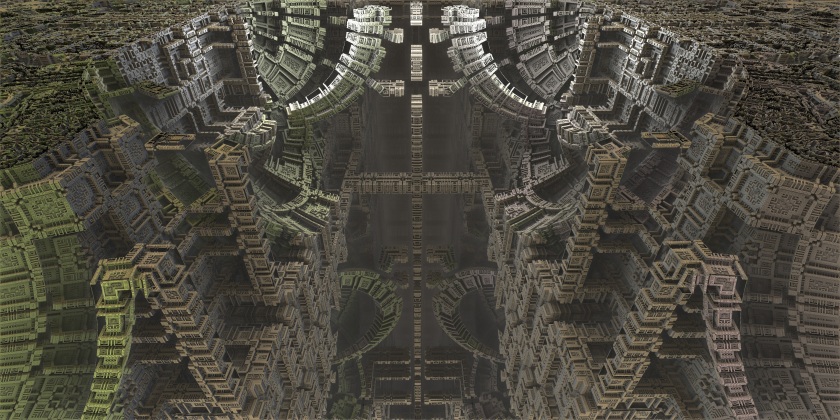 We see the concepts of dystopia and utopia explored many times in SFF. Arguably, they were at the beginning of the genre, with Thomas More’s Utopia having been written 500 years ago now. You can still read his novel, through the magic of the internet, however. In recent years, it seems writers have been more focused on creating fictional visions of dystopias than they have been in trying to set up utopian societies. Given our cultural case of the blues for the last hundred years, this is understandable. Given also that attempts to create utopias over the last few centuries have largely ended badly, well, I’m not sure I can blame the modern writer for being drawn into the dark dystopian world.

Some of the influence on our collective grim mood toward achieving happiness as a society can be laid at the feet of a man who thought he had also found the way to get out of it. Dr John Bumpass Calhoun (and isn’t that a remarkable name?) built vast utopias, and watched them crumble and die. His work directly inspired a work of science fiction, Ms. Frisby and the Rats of NIMH, but more, it influenced a perception that humanity could not survive the population explosion. There’s an excellent article I highly recommend here, but I’ve snipped it a bit below.

In 1973, Calhoun published his Universe 25 research as “Death Squared: The Explosive Growth and Demise of a Mouse Population.” It is, to put it lightly, an intense academic reading experience. He quotes liberally from the Book of Revelation, italicizing certain words for emphasis (e.g. “to kill with the sword and with famine and with pestilence and by wild beasts”). He gave his claimed discoveries catchy names—the mice who forgot how to mate were “the beautiful ones”’ rats who crowded around water bottles were “social drinkers”; the overall societal breakdown was the “behavioral sink.” In other words, it was exactly the kind of diction you’d expect from someone who spent his entire life perfecting the art of the mouse dystopia.

Most frightening are the parallels he draws between rodent and human society. “I shall largely speak of mice,” he begins, “but my thoughts are on man.” Both species, he explains, are vulnerable to two types of death—that of the spirit and that of the body. Even though he had removed physical threats, doing so had forced the residents of Universe 25 into a spiritually unhealthy situation, full of crowding, overstimulation, and contact with various mouse strangers. To a society experiencing the rapid growth of cities—and reacting, in various ways, quite poorly—this story seemed familiar. Senators brought it up in meetings. It showed up in science fiction and comic books. Even Tom Wolfe, never lost for description, used Calhounian terms to describe New York City, calling all of Gotham a “behavioral sink.”

As I was reading about the Universe 25 research in this article, I was pondering the validity of the experiment. From a genetic standpoint, even starting out with 8 of the healthiest and best mice still gives you an awful bottleneck for population diversity. Genetic drift and adaptation can be marked in very little time, as little as a handful of generations. I’ve written at length about this on my own blog, but I’ll put a bit here and you can go there if you want to dig into the nitty gritty more.

The study I had seen on the Cabbage White Butterfly had looked at changes that were potentially fatal in the wild. Butterflies raised in cages grew smaller wings, heavier bodies, and laid more eggs. The net effect of all of those was a butterfly that could fly less, slower, and while more eggs means larger population, it makes the females even more vulnerable to predation due to the added mass slowing them even more. The population was chosen for the study because there was a large extant wild population (the caterpillar of Pieris brassicae is a common pest) to compare with a population that had been raised in captivity for between 100-150 generations. The implications for captive animal populations are clear: being held captive will change you.

Just how long until we see an effect? Well, in studies done on Drosophila, a common model organism, a doubling in fecundity was seen in only eight generations. Eight. In human terms, using the rough rule of thumb of twenty years to a generation (arguably this could be telescoped further, as I’ll discuss shortly), that’s a mere 160 years. Which means, in genetic terms, that the United States of America has existed for more than long enough to affect the genes of those who are born to it. (Read More…)

The article I quote above is not the first time I had come across Calhoun’s work. I’ve seen it in my studies in both biology classes, and psychology. What’s interesting to me is that, beyond the molecular biology involved in compressed evolution of a captive species, and the lack of predation/disease cycle, mice are not humans. Calhoun brought a strong desire to anthropomorphize into his experiments, which is generally not what a scientist ought to do. However, we’re all human and our biases will creep in.

In psychology classes, you get the part of Universe 25 where overpopulation pressure led to fighting, perversions, and eventually population death. What you don’t get, or at any rate I didn’t in mine, is the sense that Calhoun had managed to stave that off in his various experiments, and had ideas of how to solve it entirely.

Convinced that he had found a real problem, Calhoun quickly began using his mouse models to try and fix it. If mice and humans weren’t afforded enough physical space, he thought, perhaps they could make up for it with conceptual space—creativity, artistry, and the type of community not built around social hierarchies. His later Universes were designed to be spiritually as well as physically utopic, with rodent interactions carefully controlled to maximize happiness (he was particularly fascinated by some early rats who had created an innovative form of tunneling, where they rolled dirt into balls). He extrapolated this, too, to human concerns, becoming an early supporter of environmental design and H.G. Wells’s hypothetical “World Brain,” an international information network that was a clear precursor to the internet. (Read the whole article here…)

Humanity has the genetic diversity to survive, certainly. What we also have, currently, is the internet and challenges to keep us interested and busy. We have hope. We have SpaceX lifting us off this mudball which will lead to imitators following the trail they have broken, which will lead to a diaspora that will affect our genes and while I certainly do not think we will ever see utopia, I think we have a lot more room here, and out there, than Universe 25 had. We also have something the mice didn’t. We have free will, agency, and diversity of thought. We can assess where we are, and make changes. Not social changes. No, I mean small changes to make ourself and those in our immediate circle happier. Will that lead to social change? Who knows?

Me? I’m going to write stories to inspire the imagination. To provide a little escape from the daily rat race. Because unlike the rats in Calhoun’s barns, we have the ability to transport ourselves into fragile worlds woven of words. And in them to find the ineffable desire to keep going on. Hope. We can give hope in our stories, that the monsters can be fought and defeated. That the stars beckon us onward to new frontiers. It’s not utopian. It’s a dream of the possibles. The last gift in Pandora’s box.