Seriously, you’ve got science fiction and fantasy options for your pleasure!

Alma Boykin just released the long-awaited pre-apocalypse book, Fountains of Mercy, that explains where the ColPlatScki Originally came from, and just who exactly were the desperate original colonists who became beatified and unrecognizable legends all those years later? 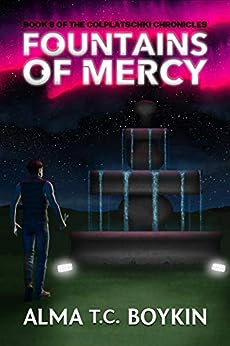 When the fires dance in the sky, the great machines will fail, and the people will rise…

Colonial Plantation LTD can’t decide what to do with Solana, also called ColPlat XI. Should it be a nature preserve, a living museum of pre-industrial techniques, or a standard colony? As the bureaucrats wrangle, a solar storm disrupts technology and reveals deep rifts between the colonists and their administrators.

Susanna “Basil” Peilov clawed her way out of the slums and wants nothing to do with the Company. Peter Babenburg just wants to build his water system and stay out of trouble. When the sky-fires come, Basil, Peter, and their families and friends stand between the colony and chaos. Company administrators assure everyone that replacement parts and assistance is coming, will come. Without those supply ships from the stars, everything falls apart and the colony will die. All that people can do is wait and hope for rescue.

The administrators never planned on facing a group of engineers, a crazy farmer and his wives, and colonists determined to protect their home. Hope comes from some unlikely places, and courage takes eccentric shapes.
Get it here!

And Margaret Ball just came out with the second in the spin-off series from her Austin mathemagicians! 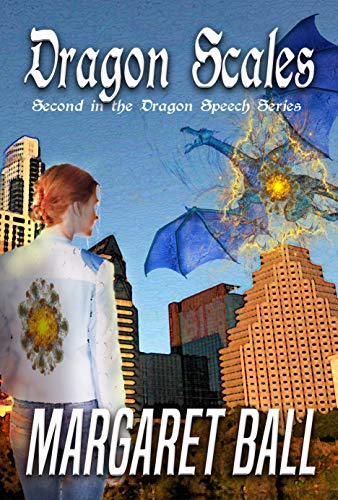 It’s one thing to meet a dragon in the snowbound mountains of the High Pamirs.

It’s another to entertain him when he shows up at your Austin home, along with his sulky and all-too-human teenage girlfriend!

Linguist Sienna Brown battles a shapeshifting dragon who helps himself to her clothes and demands enormous quantities of pizza, a teenager whose ignorance of American customs doesn’t prevent her from picking up every man she meets, a nosy neighbor, and a group of Russian thugs who are tasked with acquiring the dragon for their own country.

In addition, her boyfriend is terrified that the dragon’s presence will tempt her to use its magical but brain-injuring native language. And he’s not entirely wrong about that…