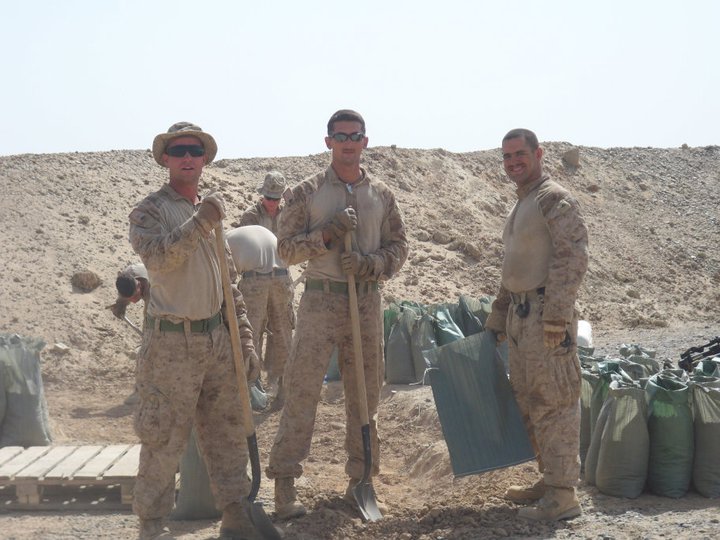 This particular moment in the year is hard on me.  I, and many others in my profession whom I consider my closest friends, are drawn up in remembrance of those whom no longer dine with us, save in spirit.  This period of reflection (with its accompanying vigils held), is never easy, but it is our responsibility.

Such events are why we see the American President visiting Normandy Beach this week, where 9,388 Americans lie in silent repose; a place where 1557 names are recorded on a memorial wall for those who could not be found; where 307 unidentified remains are marked with simple white crosses bearing the inscription “HERE RESTS IN HONORED GLORY A COMRADE IN ARMS KNOWN BUT TO GOD”.   We call these ‘The Greatest Generation’ and it is an earned title.

I grew up listening to the stories of the men who went ashore at Omaha and Utah.  I wondered how they could summon the very wherewithal to commit such acts of heroism.  I had those, the stories of those American boys drafted in Korea; my first Cub Scout Master was a brown water sailor named Rusty Gill with a bullfrog voice, tattoos on either arm, and the calm confidence of a man who had been there and done that times beyond counting.  Chief Gill taught me how to tie hooks when fishing, how to cast a line and how to patiently reel in a fish when hooked so it would stay.

“You sure this won’t break sir?”
“Son, I caught fish off the back end of destroyers like this.  It’ll hold.”
“Yes sir.”

I remember going in uniform to the local cemetery, Memorial Day in 1999 with his wife to place flags on the headstones of service members buried there.  I remember it because Chief Gill wasn’t there and I asked her why.

“Papa has a lot of friends who never came home from Vietnam.  Some things are just too hard for him to handle.”

I wondered about her statement, until the day came when I learned the value of a brother’s life, and what it means to me.  I understand now why Chief Gill felt that way. If he were still alive, I suspect that I’d spend Memorial Day driving to his house so we could sit and drink our way through a couple sixers of something cold.

My generation is split.  There are the millennials who started Occupy Wall Street, worship Obama, swear by Bernie and form the basis for a whole lot of caricatures about modern adults.  I saw them in high school learning of Marx and praising his “brilliance”. I despised most of them, and they despised me in turn.

Time has not changed that disdain.  They went off to study Marxism and how it will lead us to Utopia (hello Venezuela), I graduated from St. Chesty Puller’s Academy for Recalcitrant Boys.  Others from my graduating year (2005) went off to the Fort Benning School for Boys, the Fort Bragg School of Hard Chargers. They wear maroon and tan berets, Manchu buckles, Cav spurs, Tridents, the caduceus of Corpsmen, even the Eagle Globe and Anchors of my Marine Corps.  We saw 9/11 occur, and determined in our minds that such should never again occur on American soil, that we would not carry signs at protests- we would carry rifles.

I have spent the majority of my life, both in childhood and adulthood, around fighting men.  I understand them far better than I understand many other segments of the population. As I watch and read the current crop of authors, I see a genuine disparity between those who understand men like me, and those who do not.

Horace, in his famed Ars Poetica (the Epistle to the Pisos) explains what he sees as the conventions of writing in his day and age.  Speaking of characters which the people of that day would be familiar with, he declares:

“You, that write, either follow tradition, or invent such fables as are congruous to themselves. If as poet you have to represent the renowned Achilles; let him be indefatigable, wrathful, inexorable, courageous, let him deny that laws were made for him, let him arrogate every thing to force of arms.”

The counsel seen in this is a demand for truth, not simply of physical actions but of emotional and mental state.  Write that man as he genuinely was- valorous and flawed all at once. Write the disciplined hoplite soldier as much as you write the man who wept over the loss of his friends.

In recent decades, this has come to be a problematic thing.  The mistakes and crimes committed by US troops in Vietnam in places such as My Lai gave rise to leftist beliefs that we were all crazy psychopaths unfit to be seen in public.  They chose to portray American GIs as maddened animals unift to do more than fight and die. Rambo and Platoon come to mind as perfect examples of this.

It took the efforts of writers for shows such as Magnum PI to show something different something far closer to reality, something that wasn’t shrieking leftist propaganda and maintain popularity in a day when Jane Fonda still had a job and Hollywood was receiving funding through the Soviets (as it had been since the 1930s.  I also invite you to watch Razorfist’s analysis of the whole mess at this link).  There have been other films and TV shows since (Bluebloods is a great choice) which have helped to change the portrayal of the American GI as something else besides a mad man.  These changes are good, but they cannot be the only occurrence. In literature we must change.

Kameron Hurley’s “The Light Brigade” showed this lack of knowledge.  I read the first 30 pages, curious to see what Hurley had done. I was… bored by how she presented even something as engrossing as basic training.  There were the stereotypes and tropes one usually finds in space opera, but this was done with a genuine lack of emotion. It lacked the vernacular, the humor, the sense of being which is found in a martial setting.

Boot camp is not simply a factory churning out myrmidons conditioned to take life.  Contrary to such notions, boot camp is a place to pare away such attitudes and behaviors which are prejudicial to good order and discipline.  Boot camp is a place where the lore and history of a branch of service are first laid down. Especially in the USMC. There are justifiable reasons to call us cult members.  And we revel in such behavior. Ask us who the 2 Marines are to receive the Medal of Honor more than once; famous battles, famous individuals, famous events. All of this and the traditions which help define us are first applied here.  In many, this passing of knowledge encourages the lifelong pursuit of learning and knowledge.

Without these items though, you will not have an army worth a damn.  Not at all. A man must have pride in his symbols before he’ll fight for them, must love the color of the banners which he follows before he will lay down his life to protect them.  It is an item too few fail to understand. Hurley’s work shows this lack far too much for me to read past page 30. Had I purchased the book on a whim and taken it home, I would’ve returned it to the store that same day, even if only for store credit.

Write the soldier as he (or she) is, not as you wish to caricature them, not as your narrative demands.  Haven’t served in the military? Start looking through your list of friends for somebody who has. Sit down and ask them questions (bring drinks), listen and be respectful.  See, contrary to popular belief, we will talk. If you show yourself to be trustworthy, we’ll tell you the unvarnished truth about life in the service. What hurt, what sucked, what made us laugh, made us cry, made us mad, made us happy, what made it home for us.

Write our good points and bad.  Write about the devil-may-cares’, the ne’er-do-wells, the slackers, the fighters, the cheerful warriors, the cynical old men trying to train young boots all the finer points of their profession.  Write us, write the truth of us, and what made us great. If we don’t regret taking the lives of our enemies, don’t lie and say otherwise. It is not the only facet which defines our character, nor our personality.

Write us, as we are, were, and shall be, not your assumptions.  Write the events we lived through, as we really did it.  Write our humor and what made us laugh in our darkest hours.  Seek the truth, write the truth, without embellishment, and in so doing, you’ll have your story.