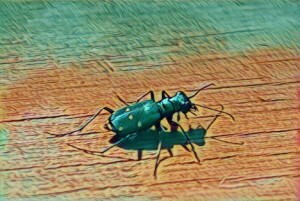 I was driving home from work, appreciating that the switch has been flipped, and suddenly! Spring. The greens are moving all misty into view, and predominantly among them here in Southern Ohio is the Amur Honeysuckle. I was contemplating this, and how that trait is one of the things that makes it a highly successful invasive species, and it dawned on me that there are more ways to invade than are portrayed in movies about aliens. Sure, overwhelming military force is one way. But what other things have species done here on Earth that enabled them to conquer and victoriously rule the continent?

This is what the Amur Honeysuckle, among many other weed species, does best. It’s among the first underbrush growth to develop leaves in the spring, and it holds onto those leaves well into winter for other species. This means it usually shades out any competition, like the local plants that used to hold these undergrowth niches, including raspberries and blackberries (in my area). Also, it’s got a ton of tasty berries that draw in the birds, who then help spread the nuisance wherever they poop.

The cuckoo, renowned the world over for their abilities to persuade other species to raise their offspring while they are off cavorting, doing the nasty, and then laying yet more eggs in innocent nests, ensure their prey not only has to raise the chicks, but that their cuckolded targets lose their own chicks due to the quick hatch rate of the cuckoo. The cuckoo chick, hatched out, shoves the other eggs, or even smaller chicks, out to make room for itself to receive all the attention.

This particularly abhorrent technique is the purview of the cold-blooded Rusty Crawfish, which takes over streams all across the US of A by main force. Native to the Ohio river, males of this species will mate with any females, regardless of species, and will rip out the spermatophores left by males who came before them to ensure their own biological dominance.

This is not a sustainable method for the long term, but Emerald Ash Borers and the Walnut Twig Beetles don’t care. They simply move from tree to tree, breaking through the tree’s protective outer bark layer and leaving behind fungus and viral invaders even smaller than they are, which then go on to sicken and kill the tree. Despite the trees massing millions of times more than a single enemy, down they go, given time.

This is the road that the Amur Honeysuckle, the water hyacinth, kudzu, and the honeybee took. All of them were introduced to virgin lands where they either forced out the competition, or rode along with humans who were creating a niche until they were powerful enough to convince the whole world that all pollination of food crops relied on them, and them alone, muahaha! Ahem. Honeybees are not a malignant invader, perhaps, but they are nonetheless pushing out native pollinators who were doing a good job before them, and will keep doin’ it after they’re gone (spoiler alert: the bees are not all dying, despite their PR to the contrary. Clever girls, to convince humans that not only are they not highly successful invaders, but they need nifty houses and food and medicine…)

The Crazy Ant (Anoplolepsis gracilipes) took this tactic when introduced to Christmas Island. They ate all the land crabs, and then moved on to other invertebrates and even birds and mammals. Like something out of a B-grade SciFi movie, the kills happen by simply overwhelming numbers of attackers, and because the ants attack and kill the very young in nests and dens where they are unable to fly or run away.

Rabbits were introduced to Australia by homesick Englishmen who longed for the fluffy bunnies of soft green hills. Little did they know that bunnies breed like, well, rabbits. Shortly after this, the sparse vegetation of Australia was vanishing into the maw of the insatiable beasts, and everything else started to dry up and blow away, effectively depriving everything else of food and shelter. Mass starvation ensued…. Or something like that. Full-scale war on the rabbits followed, using methods like a really long fence, a lot of shooting, and biowarfare.

So many stories here. And if you want more, check out the list of invasive species here. Not all invaders take the nuclear option, some are more soft and gentle in their approach. It’s hard to fight back against something all the garden club ladies are oohing and aw’ing and planting by the dozen. It’s only fifty years later when their granddaughters are out sweating in the Ohio summer rooting up the ever-damned honeysuckles one at a freaking time that the true evil is revealed.

Tags: alien invasion, invasion, science, world domination
From: CEDAR SANDERSON, science
← Breaking Up Is Hard To Do
Opt out of mandatory opt-ins →
64 Comments