First things first. This is not a method for cheap and easy computing. The Raspberry Pi can be that, but it was never my intention. I tell a lie: that was on the list of priorities, but it wasn’t at the top. Said lofty goal was (and continues to be) a computing platform that allows me to use my Das Keyboard (there are many like it, but this one is mine) mechanical wunderkind on the road. )Which, now I think on it, would be a little strange. I mean, I’d be all crouched down and uncomfortable, the screen would subject to glare, I might get gravel in my keys. To say nothing of the honking of passing cars.)

It needed to be portable. Admittedly, a three pound 101-key input device is not precisely an easy object to carry around, and if I ever try to take The Rig on an airplane, I fully expect a lot of pointed questions and raised eyebrows from the security theater players. Portable: the RasPi is tiny. The marketing copy calls it the size of a credit card. Sure, if you strip off the ports. As is, with case, it’s about the size of forty or fifty credit cards, though has the footprint of one. So it’s small. Really small. Already portable, really.

On the other hand, it doesn’t have a screen. It does have a handy-dandy HDMI port, and AdaFruit sells any number of screens. So I bought one. Hey-presto, I have a ten inch 1080 screen. It’s not too shabby, but it’s just the screen, a circuit board with some buttons and a status LED, and another with the controlling bits and bobs and input ports. And the Vault, my two terabyte external hard drive. And the necessary HDMI cable. And the power supply for the screen. And the one for the Pi.

And no way to carry and protect all this fine technology. To Amazon!! Pelican cases are awesome. Tough, rugged, a certain adventure-chic, and – for the smaller ones, at least – reasonable prices. Also, they really protect the stuff you put inside ’em. I picked up one of the 1200 cases, suggested use: camera case. It came with pick-apart foam inside, which is great. I love this stuff. Very easy to use, and to customize for whatever you’re doing with it. (Aside: Plano makes similar cases for much cheaper. I haven’t checked if they have one in the right size, but I imagine they do. Also, you get what you pay for.) There’s plenty of space inside for the RasPi, the screen, the power supplies, and a nifty Belkin travel strip with three grounded sockets and two USB ports for powering all the things.

Wait, let me back up. I have a bare case, and a bare screen. No enclosures, no handy-dandy places to attach things. Back to Amazon!! Pelican also makes panel frame attachments for their various cases. It’s a bit of a frame you screw to the case, with sockets for attaching some form of panel (see what they did there?) , and a foam rubber gasket for shock absorption. It’s inexpensive, and gets the job done.

Sort of. Not only did the attachment tabs on my AdaFruit provided screen not conform to the holes on the panel frame, but the frame itself is designed to go in the base of the case, and I wanted it in the lid. So I had to get clever. The frame fits just fine in the lid, but using it as an enclosure for the screen was … going to be tricky. First, I fiddled. I fiddled a bunch. I tried things. Stepped back. Frowned. Drank coffee. I even measured stuff, though mostly with the Mk. 1 Eyeball. (Yeah, that should about fit. I hope.) Then I took a hack saw to the panel frame, and cut about six inches out of the long side that was to go nearest the hinges. I needed some place to put the button strip for the screen, and space for the power and HDMI cords to pass through. 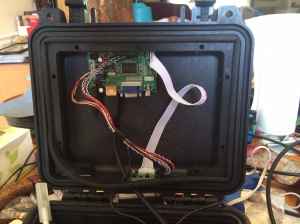 That done, I screwed the thing in place. Yeah, turns out I maybe should have measured again. There are two holes in the panel frame on each of the long sides of the rectangle, and when I got all hacky and sawy, I cut through two of them. I had just two attachment points for mounting my screen. Not the most awesome thing I’ve done, I’ll admit. To the Internet! My solution (and one of my new favorite things) was double sided foam mounting tape. This stuff rocks. A couple of judiciously applied strips held the panel frame firmly in place. I then used it to attach the button strip and the screen control board to the case lid.

I still had to figure out how the screen was going to stay firmly attached to its new home. I though about using more of the foam tape. But. I fully expect to have to fiddle with The Rig, at least once in a while. The simple reality is that this is a home-built thing, and I’m not exactly trained in fabrication (though I expect home manufacturing to solve that in the next decade or so. Next five years, if we’re lucky) or machining. There were plenty of options for – more or less – permanently attaching the screen to the case. I did not – and do not – want a permanent solution.

Fortunately, I had pretty much all the tools I needed. The screen is just wide enough that the foam rubber gasket, when installed, provides a certain amount of pressure, holding it gently in place. But this is a travel Rig, and needed just a little bit more. A few minutes with a mason jar lid, some metal snips, a pair of pliers, and a file left me with a pair of brackets that are proving sufficient to the task. 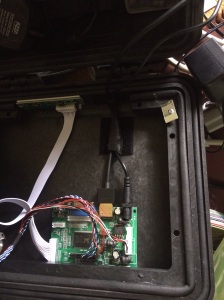 My Raspberry Pi Travel Writing Rig is, more or less, set. I’ve got a case for all the bits, a screen, and input devices. I can rock some wifi, and I’ve got plenty of back-up-

Oh, speaking of back up, the Raspberry Pi runs any number of operating systems, but all of them live on a microSD card. These things aren’t the most stable of memory platforms, and can become corrupt. I’ve done that once, already. My solution is to keep a disk image on the Vault (and sundry other locations) and a set of cloned microSD cards. If the one I’m using dies, pop it out, pop in another, and forge ahead. All of my work is saved on the external drive, and I’ve lost nothing. Or just a little bit. (Save early, save often!)

All of that aside, this is not an easy thing. This is not convenient. I like it, but I’m an inveterate tinkerer. Most writers are likely to prefer the ease and convenience of a traditional laptop. I wanted to use my awesome keyboard of awesome, and play with a new (to me) form of portable tech. I get this won’t appeal to everybody. It’s a project, and I expect to fiddle with it for a while to come.

Now, most of the Mad Genii (next year, Brad) are here in Chattanooga for LibertyCon, so comments may well be a little thin on the ground. As you read this, I’m likely working on an applied ballistics study, and this afternoon the convention officially gets underway. I know most of us are going to be might busy. That said, I expect we’re going to have an amazing weekend. I’m thrilled to be a guest for the first time. I’m going to be on panels, and , I mean , er, waxing eloquent on … something. I’m not sure; I need to check my schedule.

As for Tech Friday, my Raspberry Pi build is done. For now. Kinda. This one, at least.